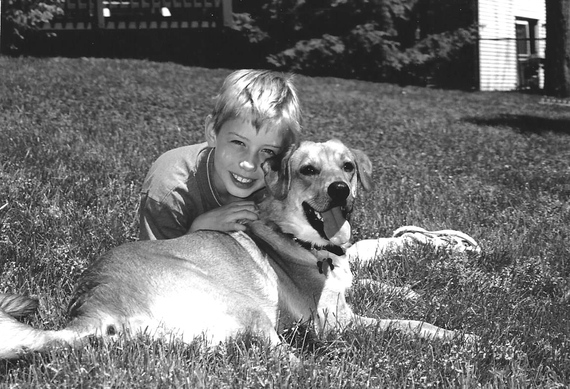 When I asked Tricia Baker how her son committed suicide, she kindly said, "We do not say 'committed suicide.' This stems from the old belief that suicide is a crime. Suicide survivors and educators are making an effort to change the way we talk about suicide and would rather people say 'completed suicide' or 'died by suicide.'"

Kenny Baker was just 19 years old when he "completed suicide" by train on May 19, 2009. Kenny made his first suicide attempt in December 2008 when he took over 400 Ibuprofen. His mother found him on the bathroom floor. "I am grateful that I found him and was able to save him that day. Kenny promised me that I would never find him on the floor again, and he kept his promise to me," Tricia said. "I never saw Kenny's body after his death so I only have good memories of my son. My last words to Kenny were, 'Kenny, I love you.' His last words to me were, I love you too, Mom.'"

The night Kenny Baker died by suicide, Tricia's husband Kurt awoke with a "bad feeling." Kurt checked the doors of the house to find the back door was left unlocked. "We were worried about Kenny at the time, so my husband went outside the house to look for him," she said. It was after 2:00 AM, and Kurt saw the police cars at the end of their block towards the entrance to the woods that leads to the train tracks. Kurt told the police that he was looking for his son and described him. Then Kurt overheard one of the officers talk into his radio, "The father is here." That was the moment Kurt knew that it was Kenny who was on the train tracks. Tricia told me the police came back to their house with Kurt, and she awoke when a bright flashlight was shone in her bedroom. "Kurt sat on the side of the bed to tell me that Kenny was dead, and my life was changed forever."

Tricia Baker is proud of her son. "Kenny was a kind-hearted, thoughtful, generous person. He was shy, soft spoken and very empathetic. Kenny was a math honor student, a gentle soul and always respectful. He was a hard worker and a good athlete," she tells me. "During high school, he swam on two swim teams and was dubbed 'Freshman Swim Star.' Kenny also had a great sense of humor. He was spontaneous and quick-witted and always enjoyed making others laugh. He had many friends, a girlfriend who loved him and a passion for nice cars." Kenny wanted to be an engineer who designed cars, and his parents knew he had the intellect, imagination and talent to do so -- until anxiety and depression squashed his dreams, and Kenny was diagnosed with mental illness at 15. 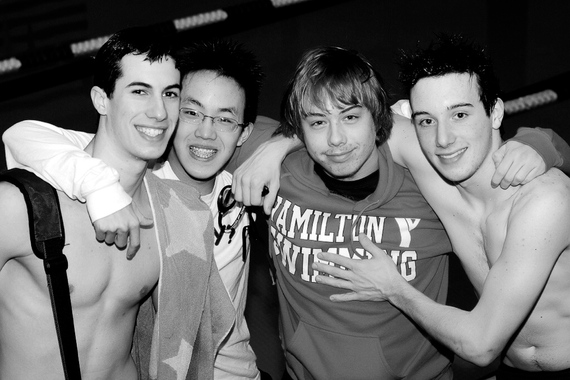 "I watched my child be embarrassed by his diagnosis and try to hide his illness from friends and classmates for over three years. I watched him spiral into despair, feeling that he was never going to be 'normal,'" Tricia said. After Kenny's suicide, Tricia founded Attitudes In Reverse (AIR) with a mission to start the conversation about good mental health and reverse the attitude of stigma against mental health disorders to save lives. Her personal mission for AIR is to educate young people on the signs and symptoms of mental health disorders. Tricia tells me that 50 percent of all mental health disorders present themselves by age 14. "I want young people to know that it is OK to ask for help. Like other biological-based illnesses, the earlier mental health disorders are diagnosed and treated, the more likely the success of the treatment. I hope that no young person ever has to live with the fear and embarrassment of stigma and that no other parent would have to live with the pain of loss that I live with each and every day."

To lose a child is the worst thing a parent can live through. But Tricia says that there is another "worst," which is to lose a child by suicide. "Losing a child by suicide is traumatic and brutal. My beautiful child, who I nurtured, encouraged, supported, and who I was so very proud of, was crushed by a racing train. I felt I was a failure as a mother, in spite of all of the advocacy I did for him at school, with the insurance company, at the hospitals, with state workers. No matter how much I did, it wasn't enough. I wasn't able to save my son."

Tricia said there were many signs and that she knew Kenny was in crisis but could not get anyone to listen. The week prior to his death, she had a team of therapists and counselors in her living room, and she told them she would be burying her son if they did not help. They all shrugged their shoulders and said that there was nothing they could do. At the time of Kenny's suicide, Tricia and her husband had begun looking into residential treatment facilities, which would have been approximately $45,000 per month. "There is no book written, 'What to Expect When Parenting a Child with Mental Illness,' and you are always second guessing yourself," Tricia said. "You also find that many of the professionals don't know how to help someone with significant mental health problems. If the professionals don't know, how does a parent know?" 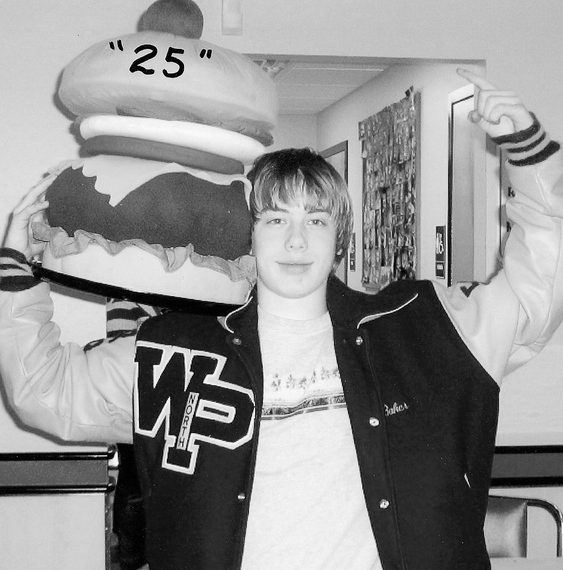 Near the end of his life, Kenny was very good about keeping his thoughts and feelings to himself. Tricia feels that once he made the decision to end his pain, he avoided her the last couple of days before he died. "I believe he knew I would figure out his plan and he didn't want me to stop him," she said. "He had been compliant with medication and therapy for over three years, and I believe he gave up hope." Looking back on Kenny's life, Tricia says she often wonders about the "what ifs." "What if I had home schooled him? He was such a gentle soul that I wonder if he needed time to mature before dealing with a harsh everyday world. What if we had gotten medical guardianship? Would this have enabled us to get him into a residential treatment facility that would have given him the coping skills to understand that things will always change. What if I slept on the floor outside his bedroom every night? I would have known when he was trying to sneak out of the house to end his life -- but what kind of life is that for a 19-year-old young man?"

Tricia and Kurt Baker believe in their hearts that they did the best they could with the skills and knowledge they had at the time. They have made it their mission to help other young people and their families and tell GLAM4GOOD that the earlier a mental health disorder is identified and treated the more likely the success of the treatment. "It is important to know, as a parent, that having a mental health disorder is not a choice. It is not something that your child can just 'snap out of.' It is not something that your child will grow out of," says Tricia. As with any illness, the longer it goes untreated, the more severe it becomes, and the harder it will be to treat.

"Suicide is not about ending life. Suicide is a symptom of an illness and it is about ending pain. It is important to talk openly about suicide. People who struggle with mental health issues tend to have an IQ at least 10 points higher than the average population, and they can be very clever at hiding their true feelings. Many people who struggle with depression are bright and spontaneous and find satisfaction in making others laugh, although all along they are struggling with their own personal sadness. It is critical to understand that asking someone if they are thinking about suicide does not give them the idea for suicide. For those struggling, the idea is already in their minds. Education about good mental health and talking openly gives people permission to ask for help. If someone you know is struggling, let them know that you care about them and are concerned. Do not be judgmental, as no one chooses to have mental health disorders. Let them know that they deserve help. Mental illness is like air. Just because you don't see it, doesn't mean it isn't there. It is all around us. No one should ever be afraid to ask for help." 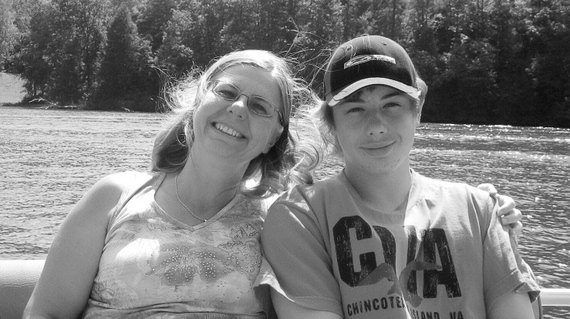 1. Talking or Writing About Suicide or "Going Away"
People who die by suicide usually talk about it first. They are in pain and often times reach out for help because they do not know what to do and have lost hope. Always take talk about suicide seriously. Too many people casually use the words "I am so depressed" or "I am going to kill myself." We need to discourage casual use of these phrases.

2. Increased Use/Abuse of Substances
People who are struggling with untreated or misdiagnosed mental health disorders often self-medicate with drugs or alcohol. Use of these substances will add to the hopelessness, alter clear thinking and can cause impulsive behavior.

3. Acting Reckless
They just may have a death wish.

4. Change in Sleep or Eating Habits
Depression disturbs a person's eating and sleep pattern. Lack of sleep can trigger depression and depression causes lack of sleep. It is an ugly illness that feeds itself.

5. Withdrawing from Friends or Family
Once a person has a plan to complete suicide, they often don't want anyone to interfere, so they avoid contact with those who are closest to them.

6. Mood Changes, Anger or Rage
Depression does not always present itself as a person withdrawing quietly. Often symptoms of depression are anger or rage. The frustration of the inability to cope with daily problems and activities can bring a person to outbursts and possibly to the point of suicide.

7. Losing Interest in Activities
Appearing depressed most of the time, giving away possessions, exhibiting chronic absenteeism or excessive lateness can be signs that a person has given up hope in life.

FOR MORE INFORMATION ON SUICIDE PREVENTION AND EDUCATION REACH OUT TO ATTITUDES IN REVERSE.