While working in his backyard last fall in Louisburg, North Carolina, Ray Gupton suffered a massive heart attack. A heart attack occurs when a blockage in an artery disrupts blood flow, causing part of the heart's muscle to die. Ray experienced classic symptoms: "I had a severe pain between my shoulder blades and my left arm felt like it was going to explode," he said. "My shirt was soaked with sweat."

Notably, Ray was awake. He was able to run inside and call 911. After being rushed to the hospital, he received three stents to restore blood flow to his heart, which saved his life. 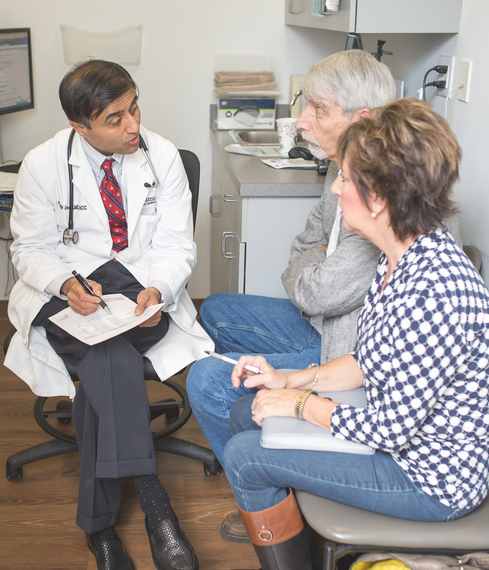 Unlike heart attack victims, those who suffer sudden cardiac arrest lose consciousness so quickly that they cannot help themselves. Ray's cardiologist, Pratik Desai, MD, described how sudden it can be: "One minute you're fine, the next minute you're on the ground." Starting CPR immediately can buy time, but in most cases, a timely shock with a defibrillator is the only way to reset the heart's normal electrical rhythm.

Dr. Desai and Rama Garimella, MD, (Cary Cardiology, Cary, North Carolina) recognized that Ray may be at risk for sudden cardiac arrest after his heart attack and prescribed a wearable defibrillator. "I didn't feel comfortable sending Ray home without it," said Dr. Garimella. Ray was instructed to wear the device under his clothes 24/7 so that it could monitor his heart.

Three weeks into his recovery, while watching TV at home alone, Ray suffered sudden cardiac arrest. He vaguely remembers a dizzy feeling, but lost consciousness before he had a chance to react or realize what was happening. "By the time I started to feel dizzy and put my head down, I was gone." The wearable defibrillator detected that his heart was dangerously out of rhythm and delivered a treatment shock that restarted Ray's heart. For the second time in a month, his life was saved.

Sudden cardiac arrest is often unpredictable, but it can be prevented proactively in heart attack patients. The wearable defibrillator is now protecting tens of thousands of people every day. And patients with a long-term risk for sudden cardiac arrest after a heart attack often can benefit from implantable cardioverter defibrillator (ICD) therapy.

Heart attack patients should ask their doctors about the risk of sudden cardiac arrest and how best to prevent it. Ray's doctors recognized the risk, and he is alive today because of it: "I did what the doctors told me, and it saved my life."

Ray is thankful he survived both a heart attack and sudden cardiac arrest, and he maintains a sense of humor and pride when he talks about it: "Ray 2. Death 0."