The heart is a muscular organ about the size of a closed fist that functions as the body's circulatory pump. The heart is divided into four chambers. The two upper chambers are called the Atria (Figure 1a). The bottom two chambers are the ventricles (Figure 1b). The interventricular septum separates the left ventricle from the right ventricle (Figure 1c). 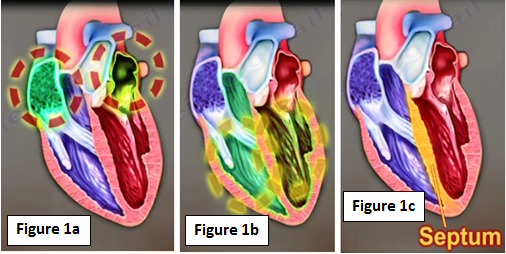 Hypertrophic Cardiomyopathy (HCM) is a disease of the heart muscle that leads to its abnormal thickening (Figure 2). This abnormal thickening of the heart muscle occurs due to an autosomal dominant genetic abnormality of the muscle cell proteins. It is the most common genetic heart malformation in athletes affecting approximately 1/500 individuals. 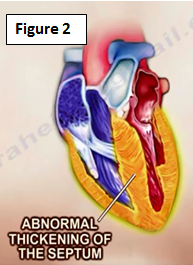 Asymmetrical thickening of the interventriclar septum may lead to a condition known as Hypertrophic Obstructive Cardiomyopathy (HOCM), which may lead to intermittent cardiac outflow obstruction, which may ultimately cause sudden cardiac death. Blood flow to the aorta is obstructed! Increased heart rate during exercise leads to decreased filling of the left ventricle with blood. This leads to a narrower left ventricular chamber that may increase the chance of outflow obstruction. Therefore, HOCM is an absolute contraindication to vigorous exercise. Because of abnormal heart muscle proteins, these patients are also at high risk of fatal heart rhythm abnormalities.

Most patients are asymptomatic and HCM is found incidentally during regular physical examinations. Thorough history taking is one of the most important parts of the examination. Some patients may present with one or more of the following symptoms: dyspnea, angina, palpations, syncope, sudden cardiac death.

Cardiac auscultation may reveal an ejection systolic murmur that is best heard at the left parasternal edge and it increases in intensity with maneuvers that decrease left ventricular venous return such as standing abruptly, from sitting position or performing the Valsalva maneuver. Investigative studies include EKG and echocardiography.

The majority of patients have a normal life expectancy. However, risk assessment for the development of sudden cardiac death should be performed. Patients with a high risk of developing sudden cardiac death may benefit from the implantation of a cardioverter defibrillator.

Remember that vigorous exercises should be avoided in patients with HCM. Genetic testing and physical screening for family members may be done. Symptomatic patients are treated medically first in order to control their symptoms. Surgical interventions including alcohol septal ablation and surgical myomectomy are indicated only after failure of all drug therapies to control the patient's symptoms.

Commotio Cordis is sudden death of a healthy individual with no underlying cardiac disease due to ventricular fibrillation following a blunt, non-penetrating blow to the precordial area of the chest (Figure 3). Sports with a higher risk of commotio cordis include basketball, hockey, lacrosse, cricket, rugby, boxing, karate, and other martial arts. 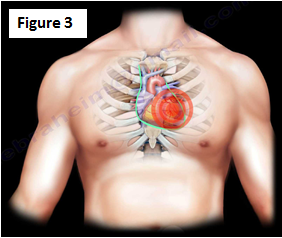 The chances of developing commotio cordis are influenced by the following factors: high energy impact (the impact side is the anterior chest wall, over the heart) and timing of impact relative to the cardiac cycle (the risk of commotio cordis increases when the impact coincides with first 10-30 milliseconds of the ascending phase of the T wave) (Figure 4). 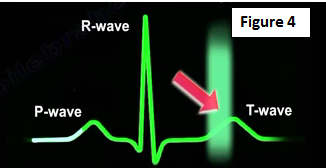 Most cases of commotio cordis are fatal. Defibrillation should be started as soon as possible, preferably within the first three minutes. Players should be advised to wear proper protective gear and to avoid blocking balls or pucks with their chest. Furthermore, the presence of automated external defibrillators at sporting events and training grounds have been shown to decrease the mortality rates with commotio cordis.

Coronary Artery Disease (CAD), such as atherosclerosis may lead to sudden heart attacks and death due to blockage of a coronary artery with plaque rupture. Plaque builds up in the arteries over time and leads to narrowing of the vessels.

Wolff-Parkinson-White Syndrome (WPWS)
Upper chambers of the heart are electrically insulated from the bottom chambers of the heart except for the specialized tissue, which conducts electrical impulse from the upper chambers to the lower chambers. A relay station, known as the AV node, regulated the current flow from upper to lower chambers. Patients with WPWS have an abnormal extra electrical pathway that by passes the AV node and allows the heart to beat prematurely, so doctors will observe a very fast heart rate, leading to tachycardia (Figure 5). A heart rate exceeding 240 beats per minute may lead to sudden cardiac death. Symptoms may include chest pain, syncope and palpitations. Continuous ambulatory EKG monitoring (Holter/Event/Loop monitor) can help in diagnosis. The heart rate may be controlled with medical treatment; however, in some cases electrical cardoversion may be required. Radiofrequency ablation may be required for long-term control.

Myocarditis is inflammation of the heart muscle that may lead to its damage, occurring due to an infection. It is usually caused by Coxsackie virus. It may also occur with Adeno or Parvo-virus. Myocarditis is believed to be responsible for up to 20% of sudden cardiac death cases. Unfortunately less than 50% of cases with myocarditis demonstrate ante-mortem symptoms.

In Arrhythmogenic Right Ventricular Dysplasia (ARVD) the muscle fibers of the right ventricle are replaced with fat and fibrous non-contractile tissue. This impairs the heart's normal blood pumping capability. Furthermore, this condition increases the patient's risk of developing a fatal heart arrhythmia and sudden cardiac arrest.

Long QT Syndrome
The QT interval on an EKG represents the duration it takes for the heart to recharge after each heartbeat. A longer than normal QT interval increases the risk of developing a potentially fatal arrhythmia called torsade de pointes which may cause sudden cardiac death (Figure 6).

There are acquired and genetic causes of QT interval prolongation. Many commonly used medications e.g. antipsychotics, tricyclic antidepressants, antihistamines, antibiotics, etc. can increase the QT interval. Loss of body electrolytes, specifically low potassium levels, in the blood can also prolong the QT interval. These factors in addition to genetic abnormalities can place a person at high right of sudden cardiac death. Genetic testing and, in some high risk cases, implantation of a cardioverter defibrillator may be needed. 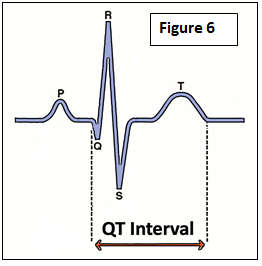 A special thanks to Qaiser Shafiq, M.D., M.M.Sc. - Division of Cardiovascular Medicine, The University of Toledo. Qaiser.Shafiq@UToledo.Edu