Loyal fans of veteran news anchor Sue Simmons may be distraught over news of her firing, but don't discount the naysayers to come out criticizing her reported $5 million salary.

The New York Post dishes out on WNBC's internal struggle on whether or not to cut Simmons from the roll call after 32-years, as more disgruntled station employees aired their grievances over her inflated salary and alleged badditude.

A source from the Channel 4 station said of Simmons' salary, "It is a lot of money, and many people have been under the impression that Sue had been phoning it in for a while." (For more snipey insider gossip, head to The Post's take on the drama)

Yet, the backlash doesn't seem to be getting to Simmons' surprisingly devoted following. Both Twitter and Facebook have given rise to a #SaveSueSimmons hashtag and subsequent Save Sue Simmons Facebook Page.

Following the heated response, a spokeswoman for WNBC said in a statement, "We have tremendous respect and admiration for Sue Simmons. For decades, Sue has been a critical part of New York’s longest-tenured anchor team in the city and has more than earned her iconic status.”

See below. Even celebrities, including Alec Baldwin and Katie Couric, are chiming in:

Rehash some of Simmons' most memorable moments: 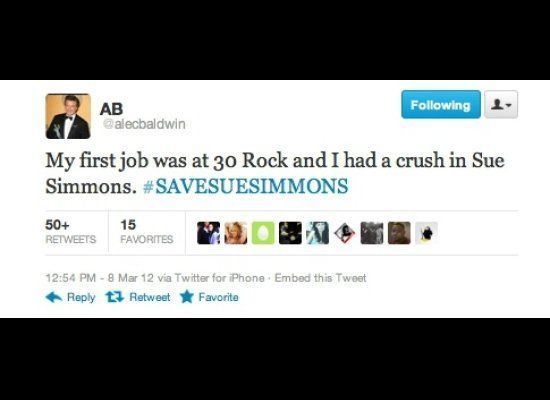