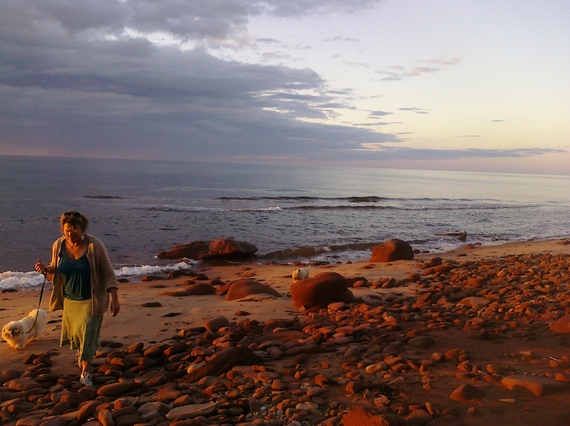 As I raced through the grocery store last Saturday, I ran into another writer, someone I've seen at occasional parties. "Wow," she said. "I see you already have another book out. Good for you!"

Yes, good for me, I thought grimly, as we said goodbye. Good, except that I'll probably never write anything decent again. And, even if I do, nobody will want it.

Such morose thoughts! Why? I have finally reached a level of success I never dared fantasize about; after all, it took me over two decades to publish even one book. Now, six years after publishing my first novel, I am about to publish novel four in October, with another under contract.

So why do I still feel so much doubt?

Because being a writer requires an active imagination. And, if you have any imagination at all -- not to mention access to Publishers Weekly - -you know that bad things can happen to good writers.

To start with, there are the factors outside of your control. For instance, your agent might retire or decide to drop you. Your editor might be laid off. Or you might not land another contract because the numbers on your last novel weren't up to snuff. Who cares if your first three books sold like those first Cabbage Patch dolls? Not the publishing industry, apparently.

Then there is your own battered psyche. Any writer who has ever been rejected (and I don't want to hear from you freaks out there who are exceptions to this) has a fear of being rejected again. We know how much it stings. It's tempting to give in to the dark side when that happens; when my first novel received its tenth rejection in a single month, I ended up drinking Grand Marnier and eating dark truffles in our basement while watching "Moulin Rouge" and sobbing like a teenager on a bad prom date.

"Why should I keep writing?" I whined to a friend who made the mistake of calling to comfort me.

"Maybe you shouldn't," she said. "Just quit. Nobody asked you to be a writer."

Ouch! It's true! Nobody asked me to be a writer! And nobody asked you, or anyone else, either.

Yet, we want to keep writing. We have to keep writing, because, as our nation's new Poet Laureate, Juan Felipe Herrara, put it so brilliantly in a recent NPR interview, "the mere act of writing is an act of crossing over from silence into being."

But how can we keep going during these frequent crises in confidence? Here are a few of my tricks. What are yours?

1. Work with Your Hands
There is something satisfying about handiwork, because you can see the physical results of your labor. Whether you're baking bread, knitting a scarf, or weeding your garden, making something with your hands can set your mind on fire.

2. Forget about Success
Sometimes the best way to coax that muse to land on your shoulder is to stop trying to hard. So what if you fail? If you fail with this story, book, or poem, you'll write something else. It doesn't really matter what happens with the words you put on the page. Those words are for your entertainment only. My friend is correct: nobody asked me, or any of us, to write, and that's an extremely liberating thought. We can do whatever the hell we want. These are our words to shape. The fun is in the process.

3. Stay Flexible
Recently, my editor asked me to consider writing historical fiction. Ha! The only subject in school I hated was history. I couldn't memorize dates and names to save my life. "I'd be terrible at that," was my automatic response. But, after thinking about her request for a while, I began to imagine a story about a famous New England poet from the nineteenth century, and suddenly thought, "Well, why not? I could always try it and, if I don't like it, I won't do it again."

4. Keep Your Projects Warm
Even during times of self-doubt, the best cure is to keep your manuscripts warm. Tinker, don't write. Say to yourself, "I'm not going to create anything brilliant today. I'm just going to fix this one sentence." Often, that will keep your brain engaged in whatever your current writing project is, enough so that some secret door will open and let new ideas out when you're least expecting it. Then, quite suddenly, that thing will happen that you've been hoping for: you will be writing without caring about who will read it or what they will think, because writing is your passion.