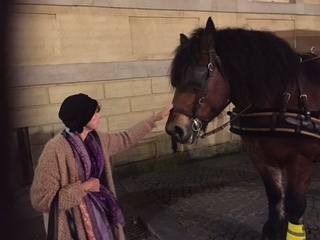 Most of us discover at an early age that suffering is a natural and unavoidable aspect of life. A two year-old child who doesn't like to have his diaper changed, says, "I don't want to, but I have to." He already experiences discomfort as an inherent part of life. (If he's fortunate, the level of suffering won't rise above the essential due to the changes and losses inherent in living). Sadly, joy is less common, often achieved with effort, like reaching for a purse on a high shelf.

Facing suffering in the world can lead us to find a way to effect change and relieve others of suffering; at other times, no useful purpose is served and we do well to distinguish between constructive and futile worries.

For example, watching traumatic events replay on TV has raised the possibility of increasing post-traumatic stress. While the research isn't definitive, some people like Mr. E. suffered from viewing the nightly news reports of bombings and shootings, which he eventually realized contributed to his disturbed sleep pattern. In essence, unless we find a way to take action to improve matters, we do well to avoid viewing violent news reports that add unnecessary suffering.

In light of the serious world-wide suffering among people, please forgive me in citing a comparatively trivial, personal vignette. A few weeks ago, I participated in a popular tourist attraction, a horse tram ride through the cobblestone streets of Bruges, Belgium with twenty other passengers, pulled by one horse named Bella. I could not relinquish my feelings of sympathy for the horse who was forced to lug us, a very heavy load. She plodded along, panting up the steep and narrow alleys, egged on by her owner-driver, in a caring, although demanding, voice.

I longed for the end of the ride which seemed interminable. I searched the faces of fellow passengers who showed no signs of concern and recognized I was "odd woman out" and best keep my mouth shut.

Of course New Yorkers would not tolerate this scene. And I don't want to, nor do I have any business to make trouble regarding this matter, but I use the example to illustrate a point about suffering--a tricky predicament in which a "supposedly" pleasurable activity inadvertently resulted in suffering.

One man noticed my discomfort and tried to assure me.
"She's a strong horse and you know, if we don't 'use it, we loose it.' " His sympathy helped a little, but still my mind couldn't escape thoughts of Bella's struggle. Finally we arrived at our hotel, and as I patted her flaring nostrils and observed her labored respirations, I thanked her and offered sympathy for the suffering in which I had (unwittingly) participated.


Then I caught myself prolonging distress by worrying about Bella's future. How many times would she have to lug a heavy load before dropping dead on the job?

This kind of thinking is well-recognized and labeled "anticipatory suffering." Recognized for its futility, it is best relinquished as soon as possible.

Conclusion: Suffering is inherent in our existence. But we're best served when we distinguish whether we have a modicum of control over it. Whenever possible, we should shield ourselves from distress stemming from a situation that we can't change or that serves no useful purpose.