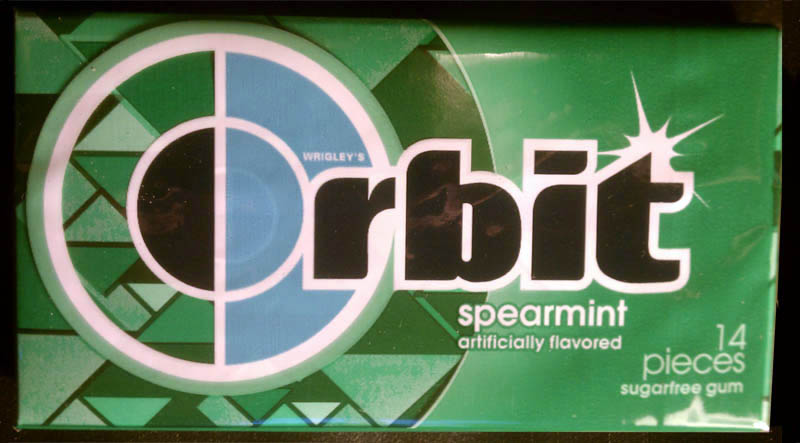 Is there a chemical downside from the sugar substitutes in your favorite sugar-free gums? TheGreenGrok takes a look.

More than 80,000 chemicals are produced, used, and present in the United States. This is one of their stories.

How many chemicals are in your sugar-free gum? And should you care?

Welcome back from Thanksgiving! If you're like me, the past week has been filled (literally) with turkey, cranberries, stuffing, sweet potatoes, and pumpkin pie. Yum. And if you're like me, stuffing all that foodstuffs into your stomach has you jonesing to shave inches from the old waistline before the onslaught of holiday cheer.

If you like gum, perhaps sugar-free gum is part of your strategy for shedding some pounds while still enjoying some sweet masticating. And why not? It has a lot to recommend it -- helps you cut calories while making your dentist visits less painful and hopefully Novocaine-free.

But there may be a chemical downside to sugar-free gum. A downside that comes from the many chemicals that substitute for sugar.*

The Chemist's Cookbook to Sweetness

Turns out, making something taste like sugar without actually using sugar is no easy feat. Depending upon the specific product you're "cooking up," it can require a dizzying array of chemicals -- each with its own specific type of sweet taste. One may have just the right amount of sweetness, but with a bitter kick to it. To counter the bitterness, another sweetener that's extra sweet is added in. But that one may leave a strange aftertaste that in turns requires another sweet-tasting chemical to counteract the aftertaste. And so it goes.

Wonder what those compounds might do in your body besides taste sweet? Let's take a look at the seven chemicals (see also here) widely found in sugar-free gum.

Acesuflame potassium -- or, as it's known in the biz, Ace-K (and no, it's not a club-kids drug) -- first crossed my desk earlier this year for its use in Equal and a plethora of other reduced-calorie products. The official word, of course, is that Ace-K is safe for moderate use. And that very well may be true. A number of studies support that contention, but then again, some have questioned the quality of those studies, and concerns about a possible link to cancer have been lurking since about the time the chemical was first tested in the 1970s.

My assessment? It's not yet certain that there are no health risks associated with Ace-K. (Sorry for the double negative but that's about the best way to summarize our understanding at this point.) Additional testing is required on this one to be sure.

Aspartame, the major ingredient in Equal, is one of the most widely used of the sweeteners and perhaps for that reason one of the most controversial. It has its backers and detractors. For the most part, experts and relevant agencies have concluded that there is little cause for concern. For example, the American Cancer Society writes that "for most people, no health problems have clearly been linked to aspartame use.”

But do note the little caveat -- "for most people." A notable exception to the “no health problems” line is people who have phenylketonuria, an inherited inability to break down phenylalanine, an essential amino acid. Aspartame contains phenylalanine, and its ingestion by people with phenylketonuria can lead to brain damage. Those folks clearly need to give aspartame and therefore most sugar-free gums a wide berth (which is why all the packs of sugar-free gums TheGreenGrok scrutinized this morning included a notice about phenylalanine).

Phenylalanine is an amino acid found in the artificial sweetener aspartame. For most people this is OK, but people with phenylketonuria should steer clear. (TheGreenGrok)

And while groups like the American Cancer Society advise that aspartame is safe for folks without phenylketonuria, other groups like the Center of Science in the Public Interest are less sanguine and warn that there is cause for concern with respect to several ills including preterm deliveries and cancer. (See also here and here.) How serious should you take these warnings? As is usually the case when shopping in the chemical marketplace, it's your call -- caveat emptor.

On the sweetness chart, sucralose, the major ingredient in Splenda, is way up there -- some 320 to 1,000 times sweeter than plain ol' sugar. But from a structural and chemical viewpoint, sucralose is about as close to sugar as they come -- basically it's sucrose (naturally occurring sugar) with three hydroxyl groups removed and replaced by chlorine atoms. Perhaps its chemical similarity to sucrose justified choosing such a sucrose-sounding, non-technical name such as "sucralose" for the stuff. But it sure makes sense from a marketing point of view; sucralose sounds a whole lot more chewable than its actual chemical name: trichlorogalactosucrose or 4,1′,6′-trichlorogalactosucrose.

As McNeil Nutritionals, the company that makes Splenda, points out, "Although sucralose has a structure like sugar's and a sugar-like taste, it is not natural." Not being natural, though, is not the same thing as being unhealthy, and most of the studies to date about sucralose suggest it is safe for its intended uses. Initial studies found no links to cancer and more recent work suggesting a link have yet to be published and are controversial. Some recent studies suggest that sucralose may alter our gut microbiota (see here and here) and be linked to inflammatory bowel diseases.*

My assessment of sucralose: most likely probably OK, but zero risk? I would have to say, no.

The last four artificial sweeteners commonly found in sugarless gums -- maltitol, mannitol, sorbitol and xylitol -- are all sugar alcohols, which is a bit of a misnomer as the compounds are technically not exactly sugars, nor are they alcohols. They are what is known as polyhydric alcohols, a type of non-sugar carbohydrate. And being carbohydrates they are not actually calorie-free. The four listed above range from having about half to equal the sweetness of sugar with about half the calories, primarily because we are unable to digest these compounds in the small intestine.

While there's no evidence of any major health effects from sugar alcohols, most have a laxative effect -- something some people are more sensitive to than others and so can be welcome in some cases and life-threatening in others. There have been some dramatic cases documented where individuals have lost tens of pounds due to sorbitol's laxative effects. Effects so well known about that they figured into an episode of the Fox TV series "House" (HT to Alexis Madrigal at Wired), and they're effective enough that in the real world the U.S. Food and Drug Administration requires a warning label be placed on foods containing sugar alcohols whose intake may cross a certain threshold: "Excess consumption may have a laxative effect." But meeting that threshold [pdf] would require chewing on lots of sugarless gum (more than a stick or two), intaking on the order of 10 to 60 grams. Which is probably why we couldn't find it on any of the sugar-free gum labels we looked at today. (Australia is apparently a different story.) 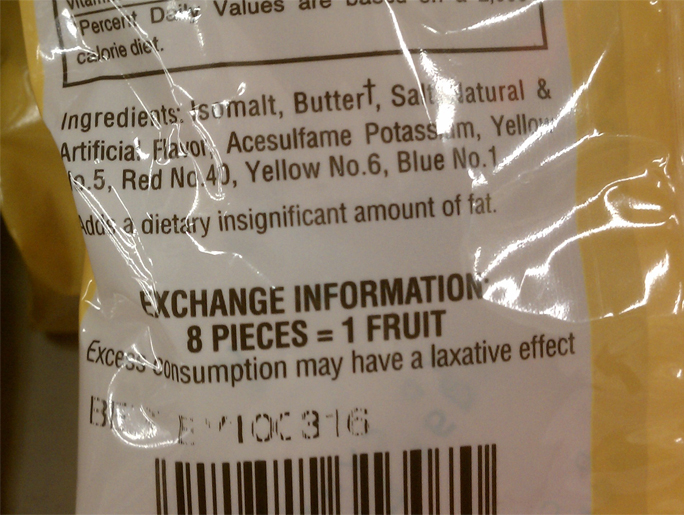 Is the gum you chew -- and the other sugar-free treats you ingest -- encouraging trips to the john? (Picture is of a bag of Rite Aid sugar-free butterscotch candies.)

But if you're concerned about any unwanted movement in this regard, I suggest looking beyond your sugar-free gum. With sugar alcohols used in lots of reduced-calorie foods and supplements, you may be taking in more than you think when satisfying those sweet cravings with artificial sweeteners. (See photo above.)

On the positive side, some sugar alcohols are thought to reduce tooth decay, as many a sugar-free gum label boasts. As explained on WebMD:

Xylitol ... is not converted in the mouth to acids that cause tooth decay. It reduces levels of decay-causing bacteria in saliva and also acts against some bacteria that cause ear infections.

Sounds great but the dose in gum is probably not sufficient to gain the dental benefit. And if you decide that chewing lots of xylitol-containing gum might do the dental trick, just remember that xylitol's laxative threshold is 20 grams per day, so upping the intake may also bring on the BMs. And, while it may be OK for us humans, it's most likely not at all OK for our so-called best friend. While sugar alcohols do cause a slow insulin increase in some people, for dogs the increase can be toxic. As Snopes.com reports:

"[W]hen [Xylitol is] ingested by dogs it can cause a dangerous surge of insulin. ... At higher doses, Xylitol is believed toxic to the canine liver. Just three grams of Xylitol can kill a dog."

Since gum manufacturers do not indicate how much xylitol is in a stick of gum and the size of your dog would affect how much could be lethal, my advice is: Keep your gum away from Rex.

And my advice on your intake of sugar alcohols? Go easy peezy.

So that's the sticky situation with sugar-free gum. Something to chew on while you gear up for the holidays.

*It's not a sweetener, but BHT, a preservative, is also found in many sugar-free gums and may pose some health concerns. We just may have a follow-up post on BHT shortly.

** Research is beginning to highlight just how significant an impact tinkering with microbial balance and gut flora and fauna can have on our health. See previous posts here, here and here.