We've long known that many industries work hard to influence federal research and policy, putting profit before the public health. And now, recently uncovered documents show that the sugar industry spent over a decade fighting federal research on tooth decay.

According to a new analysis published in the journal PLOS Medicine, internal memos from the 1960s reveal that major sugar companies were able to successfully manipulate the federal research funding priorities of the U.S. National Institute of Dental Research, a branch of the National Institutes of Health. The NIDR was the most significant source of federal funding for dental research at a pivotal time in nutrition science history, according to the study.

“[The documents] show that the sugar industry appreciated the dangers of sugar in terms of cavities way back in the 50s,” said the study's primary author, Prof. Stanton Glantz of the University of California, San Francisco. “But rather than just say, ‘Okay, we need to do something about this,' they successfully influenced NIH to not pursue the kind of research that would have eventually supported public health interventions to reduce sugar intake."

"I don’t think the NIH was complicit in this, I think they were victimized by it."

A series of internal memos, meeting minutes and other documents from a business coalition called the International Sugar Research Foundation, spanning 1959 to 1971, openly discuss how to protect food sales by guiding NIH recommendations away from sugar reduction. The foundation was mostly concerned with the 1971 launch of an ambitious national plan, the National Caries Program, to end tooth decay in the U.S. within a decade, according to the study.

The documents came from the archive of Roger Adams, an organic chemistry professor who was on the scientific advisory board of the ISRF. They indicate that the industry knew sugar played a major role in dental cavities as early as 1950. The documents also reveal that the sugar industry association convened several symposiums on sugar and cavity control, with participation from government employees during the years leading up to the approval and launch of the anti-cavity research initiative.

In 1969, NIDR intramural scientific director Richard Greulich had these comforting words for the sugar industry at one of their scientific symposiums:

One could say, on logical grounds and good evidence, that if we could eliminate the consumption of sucrose, we could eliminate the problem -- because we would be denying these pathogens their primary source of nutrient. We are realists, however, and we recognize the value of sucrose to nutrition. So while it is theoretically possible to take this approach to demonstrate it, and it has been demonstrated certainly in animal models, it is not practical as a public health measure.

And Greulich’s attitudes were reflected in the eventual 1971 launch of NIDR’s anti-cavity research plan. NIDR only approved a couple of grants exploring which foods contributed most to cavities, while awarding generous grants to industry-supported initiatives like making food additives to make sugar less harmful, a tooth decay vaccine, and mouth rinses to target oral bacteria. Out of the myriad generously-funded experiments NIDR approved, only dental sealants and fluoride delivery through water panned out as successful in helping reduce cavities.

Now, of course, sugar restriction is recognized as one of the most helpful strategies in reducing cavities (as well as a host of other ills). Mouth bacteria eat sugar left on the teeth, and then release an acid that leads to plaque, which makes a person more vulnerable to cavities. 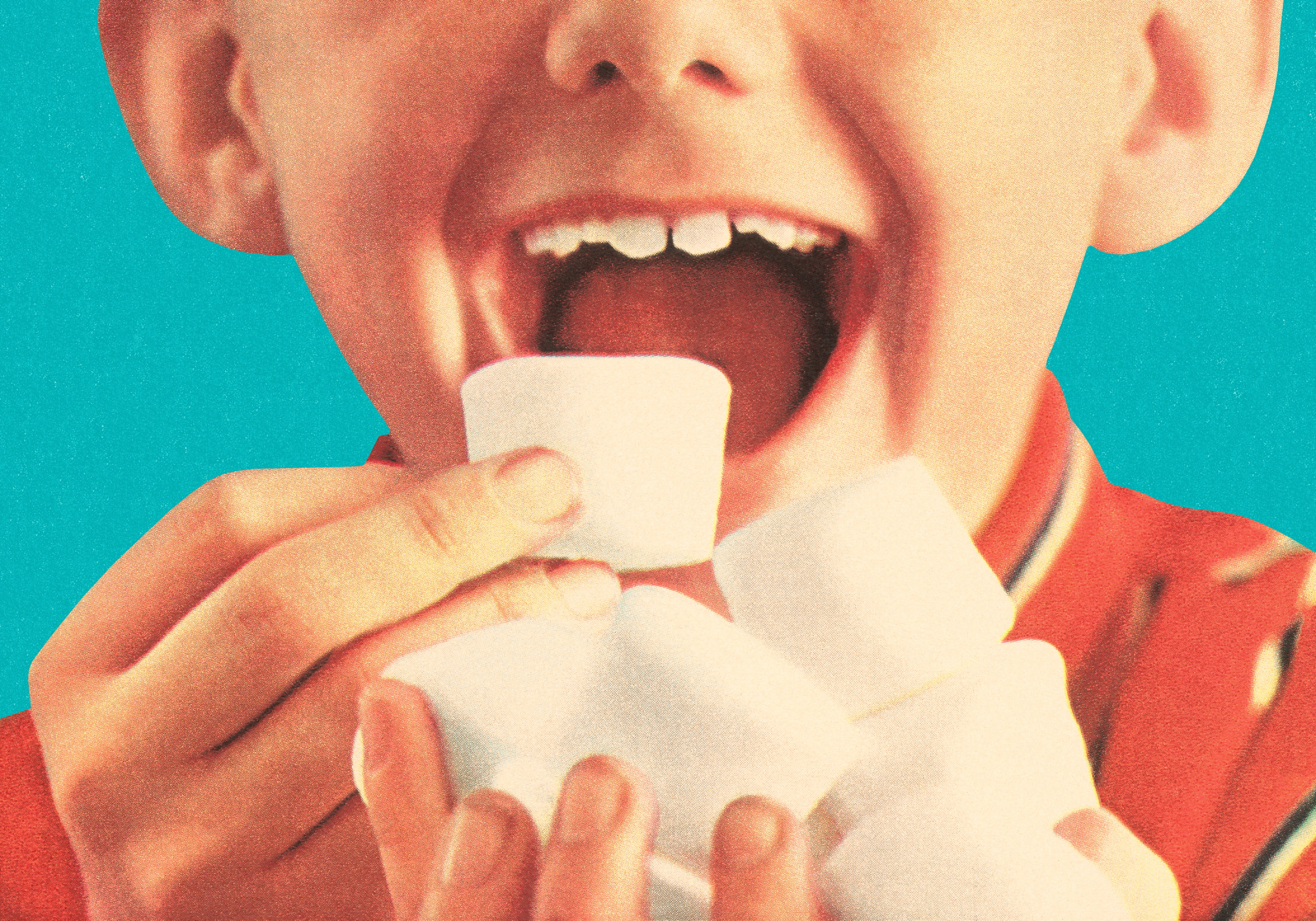 Glantz argues that sugar industry influence on federal research grants resulted in a massive “missed opportunity,” as 64 percent of kids were still developing cavities one decade after the launch of the research effort.

What's more, according to Glantz, it severely delayed research into nutrition guidelines that the federal government, in 2015, is only now beginning to consider: limiting sugar to no more than 10 percent of one’s daily calorie intake, mandating a line for percent daily value for sugar on food labels and considering other policies to help limit sugar consumption and marketing for children.

Of particular interest to the researchers was the industry’s opposition to research that measured the cariogenicity of a food, meaning the risk of dental cavities that would rise from eating it. Having those tests, he argued, are key to a “whole range of public policy options” that include being able to accurately rate and evaluate food, consider limiting the level of sugar in a food or even slap a warning label on high-sugar foods. These measures have been more recently implemented, but they’re only used for food marketers who want to make positive health claims -- say, for sugar-free gum -- instead of negative claims about foods with a lot of sugar in them.

Glantz is known for spotlighting industry influence: He is primarily a tobacco researcher who received the tip of a lifetime in 1994 when boxes of internal tobacco industry documents were dumped anonymously outside his office. The documents revealed the extent to which the cigarette business had known for the past 30 years that their products were addictive and caused cancer, and they ended up playing a pivotal role in litigation against tobacco companies.

Glantz marveled at how the sugar industry documents seemed to echo the same kind of tactics the tobacco industry deployed before the public knew how bad smoking is for one’s health.

"It isn’t like [the sugar industry] went into the NIH with a bushel barrel full of money and bribed them, but they understood how these advisory committees work and then co-opted the advisory process,” said Glantz. "I don’t think the NIH was complicit in this, I think they were victimized by it."

'It Doesn’t Help Us Move Forward'

Lillian Shum, Ph.D., director of the Division of Extramural Research at National Institute of Dental and Craniofacial Research at the NIH -- the contemporary iteration of the NIDR, now renamed -- reviewed Glantz’s paper but declined to comment on it, stating that the study describes her department’s research priorities from over 40 years ago.

“At this point, we don’t have anybody on staff who was involved, so from that perspective, there’s really no way for us to assess what’s in that paper.” said Shum. “But I can tell you we do support research in sugar as a component contributing to tooth decay process, as well as oral bacterial research, oral microbiology, the biology of the tooth and the role of fluoride and sealants.”

Shum also pointed toward the NIH’s current regulations for ensuring that financial conflicts of interest don’t muddy the waters when it comes to applying for or receiving NIH grant funding, and suggested that recent global and federal guidelines on limiting sugar to 10 percent of one’s calories may in fact be supported by NIH-funded research.

“Limiting sugar intake -- sugary foods, sugary beverages -- is the message, in addition to seeing your dentist on a regular basis, brushing and flossing,” Shum concluded. Similarly, in a statement to TIME, a spokesperson for the Sugar Association (which is the updated International Sugar Research Foundation) questioned the relevance of Glantz’s study in history.

“It is challenging for the current Sugar Association staff to comment directly on documents and events that allegedly occurred before and during Richard Nixon’s presidency, given the staff has changed entirely since the 1970s,” reads the statement. "However, we are confused as to the relevance of attempts to dredge up history when decades of modern science has provided answers regarding the role of diet in the pathogenesis of dental caries…”

Prof. Riva Touger-Decker, director of the division of nutrition in the school of dental medicine at Rutgers, takes a similar view. She wasn’t involved in the making of Glantz’s report, and upon review isn’t so convinced about its relevance to 2015.

"It’s a report; there are facts, but frankly many of these people are dead,” said Touger-Decker. “If we want to spend time focusing on what happened or what was, it doesn’t help us move forward.”

"They’re saying “Oh, this is a long time ago, what difference does it make,’ -- and that’s exactly what the tobacco industry said."

What would be more helpful, she said, would be to seriously consider the free/added sugar restrictions recommended by the World Health Organization, American Heart Association and the recently-released report from the U.S. dietary guidelines advisory committee: limit added sugars to between five to ten percent of total calories.

“How do we reduce that free sugar intake, along with other things in our diet, and increase our physical activity?” she said. “How do we teach everybody that water is healthier than these other beverages? That has to be a grassroots effort."

But in fact, says Glantz, the findings are extremely relevant in 2015. Cavities in baby teeth can set the stage for lifelong oral disease and stigma related to that disease, and while children’s dental cavities did decline from the 1970s to the mid-1990s, the trend seems to have reversed since then, according to the NIH. There are an estimated 42 percent of children ages 2 to 11 who have cavities in their baby teeth, and 23 percent of children have untreated cavities. Currently, 92 percent of adults with teeth and between ages 20 and 64 have dental cavities, and 26 percent of adults have untreated cavities. It’s also estimated that about 5 percent of U.S. adults have no teeth.

“The sugar companies, in criticizing what we did, haven’t said we’ve said anything wrong or that we’ve misunderstood and misrepresented anything,” said Glantz. "They’re saying “Oh, this is a long time ago, what difference does it make,’ -- and that’s exactly what the tobacco industry said."

CORRECTION: A previous version of this article misstated Shum's title as director of the NIDCR. She is director of its Division of Extramural Research.

Arizona Raspberry Iced Tea
Amazon.com
These recognizable-anywhere cans are bad news: They contain 23.5 ounces, nearly three times the suggested serving size for the tea inside. With 90 calories per 8 ounces, finishing an entire can adds up to almost 270.

Flickr photo by libookperson
Minute Maid Lemonade
Amazon.com
A 12-ounce can of the summer favorite clocks in at 150 calories, more than a can of Coke and the same as a can of Pepsi.

Photo from Amazon.com
Dr. Pepper
Amazon.com
A 12-ounce can clocks in at 150 calories, more than a can of Coke and the same as a can of Pepsi.