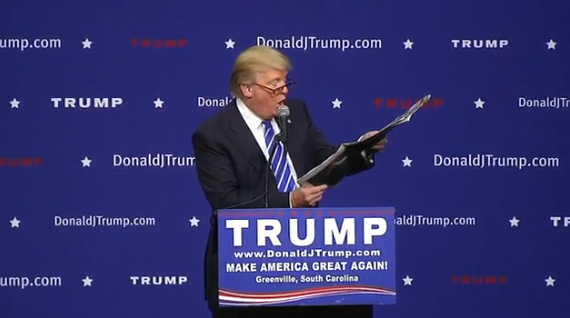 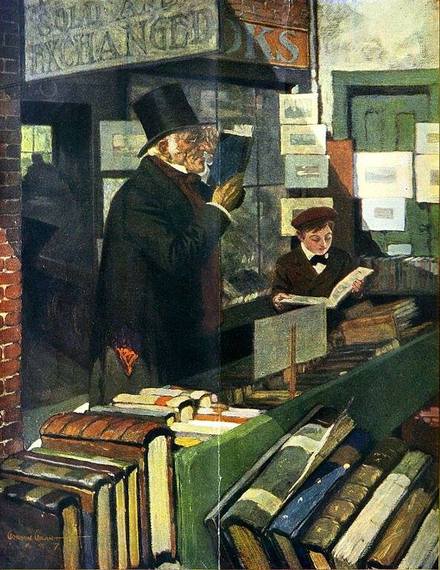 He lacks the required temperament, he's too erratic, a loose cannon, a walking time bomb, he lacks integrity and exhibits time and again poor judgment.

These are just some, but certainly not all, of the character deficiencies attributed to Donald Trump, the Republican nominee for U.S. president, and the reasons most cited by his critics for not voting for him in November.

And yet there's still one more deficiency not often discussed.

Trump rarely reads books. He's too busy, he claims. He has never read a presidential biography.

If Trump truly wants to "Make America Great Again," you would think he would have a voracious appetite for the written word and learn from the great masters who occupied the Oval Office over the years.

Though largely self-educated, Lincoln, who didn't have access to many books growing up, elevated his use of the English language largely through the Bible and the plays of William Shakespeare.

Even when he was in the White House, the "Rail Splitter" was often heard citing Shakespeare phrases to Cabinet members. When he first entered the White House in 1861, one of his first actions was to check out a stack of books from the Library of Congress on military strategy, so he could prepare for the rupture of the approaching Civil War.

Theodore Roosevelt, who was no bully, but knew how to operate a bully pulpit to advance his agenda, was known for swallowing books. TR read a book a day, sometimes more, according to historians.

Much like Lincoln, Millard Fillmore, the last Whig president (1850-1853), was largely self-educated and developed a lifelong passion for reading books. In 1846, Fillmore helped found the private University of Buffalo (which today is the public State University of New York at Buffalo), and he served as the first president of the Buffalo Historical Society.

John Adams and Thomas Jefferson were well known for their extensive home libraries. Adams devoured Greek classics and, even when his eyesight had gone toward the end of his life, he had one of his nurses read to him.

In 1814, when the British invaded the Library of Congress, they burned all the books. Jefferson was quick to donate his entire book collection to the LOC, which comprised 6,487 books.

John F. Kennedy developed a strong liking to spy thrillers, including the works of Ian Fleming (James Bond). Kennedy was additionally drawn to the works of Ernest Hemingway.

Kennedy cited Winston Churchill's "Marlborough: His Life and Times," a four-volume, million- word biography about John Churchill, 1st Duke of Marlborough, as one of his all-time favorites, along with John Buchan's memoir "Pilgrim's Way."

Similar to Kennedy, Franklin Delano Roosevelt loved detective stories and reportedly took 50 of them with him to the Tehran Conference in 1943. At the time of his death, FDR was reading "The Punch and Judy Murders," a mystery novel by American writer John Dickson Carr.

Even George W. Bush, often derided as an unlettered philistine, reportedly read 186 books between 2006 and 2008, a vast majority of them dealing with history and biographies. In an op-ed piece for The Wall Street Journal in 2008, Karl Rove, Bush's White House senior advisor and deputy chief of staff, wrote "that in the 35 years I've known George W. Bush, he's always had a book nearby."

Considering Donald Trump has up to this point largely shunned books (save for his own), I often wondered what books would be recommended to him if he had reached out to others.

Carlos Eire, professor of history and religious studies at Yale University, says that since it seems that Trump has already read Niccolò Machiavelli's "The Prince," despite his disclaimers about book-learning, "I would recommend that he read 'The Twelve Steps of Humility and Pride' by St. Bernard of Clairvaux (12th century)."

Eire additionally shared with me his own theory of this dysfunctional presidential season. He strongly believes Hillary Clinton is paying Trump to run, and that he'll end up as secretary of the Treasury in her administration. "I think Hillary is paying him $10 million for every outrageous statement," Eire said.

Chris Matthews, political commentator and host of MSNBC's "Hardball with Chris Matthews," says he would have recommended "Franklin and Winston: An Intimate Portrait of an Epic Friendship" by Jonathon Meacham, while Jill Abramson, former executive editor of the New York Times and currently senior lecturer in the English Department at Harvard University, recommends "Lincoln," a masterful work by Pulitzer Prize-winning author David Herbert Donald.

American lawyer, jurist, author and Harvard Law School scholar Alan Dershowitz thinks The Donald should get back to the basics of many American civics classes by reading the Federalist Papers and the U.S. Constitution. And he can chase that, Dershowitz recommends, with Doris Kearns Goodwin's "Team of Rivals: The Political Genius of Abraham Lincoln" and Robert Caro's masterful four volumes of "The Years of Lyndon Johnson" (with Volume 5 still in the works).

Richard Bensel, professor of government in American politics and political economy at Cornell University, recommends "Reflections on the Revolution in France" by Irish statesman Edmund Burke. Bensel recommends the book so strongly that he thinks Trump should suspend his campaign until he has finished it.

Robert W. Gordon, Chancellor Kent Professor Emeritus of Law and Legal History and professor (adjunct) of law at Yale Law School, believes Trump has a very short attention span, so it's unlikely that he would actually read any of these books, but he nonetheless would benefit from dipping into "two 20th century presidents who were like him in that they were born to wealth and had big egos and big ambitions -- but unlike him had a huge curiosity to learn about the world from books and informed people like scholars and experts -- I'm thinking of Edmund Morris' three-volume biography of Theodore Roosevelt (the last volume, Theodore Rex, deals with TR's presidency) and of James MacGregor Burns' biography of Franklin Roosevelt (Volume 1, 'The Lion and the Fox,' about the New Deal, and Volume 2, 'The Soldier of Freedom,' about FDR in World War II)."

Darrin McMahon, professor of history at Dartmouth College, in sharp contrast with other colleagues, thinks the Republican nominee might be better served reading some of the Russian classics, particularly Leo Tolstoy's, "The Death of Ivan Ilyich," the story of a wealthy and successful man who has spent his entire life amassing a fortune and climbing the social ladder without much regard for anything else. "But when illness presents him with the immanence of his own death," McMahon explains, "he is forced to confront the superficiality of his life so far, and to ask deep existential questions about the choices he has made and what is truly of worth."

"A little bit of such honest soul searching might do Mr. Trump some good," McMahon said.

Paul Kennedy, professor of history and director of the international security studies program at Yale University, isn't confident, even if asked, Trump would read any books he recommended. So the next best thing, Kennedy thinks, would be to strap Trump into a chair and force him to listen to Winston Churchill's speeches and radio broadcasts during World War II. "If Trump used even one-50th of the language," Kennedy said, "it would be an improvement."

Susan Pedersen, professor of British history at Columbia University, thinks Trump would benefit mightily by reading "Politics as a Vocation," an essay by German economist and sociologist Max Weber. "A brilliant short essay," Pedersen said, "on the kinds of attributes and cast of mind required for the 'politician of responsibility' -- that is, the politician interested in accomplishing real things in the real world, and who is therefore willing to consider the unintended consequences of actions, and to compromise to achieve something rather than focus on an unachievable best."

Interestingly, Pedersen said that Bill Clinton once told her great, recently deceased colleague (and historian of Germany) Fritz Stern that Weber's `Politics as a Vocation' was one of the pieces that had most greatly influenced him."

Finally, British historian and professor of history at Harvard University Niall Ferguson, employing his trademark sardonic wit, suggests "A Little History of The World" (1935) by Ernst Gombrich, a book that uses only words and concepts that children can understand.

So, there you have it.

If The Donald really ever gets serious about cracking the books, he has plenty of quality reading material from which to choose.