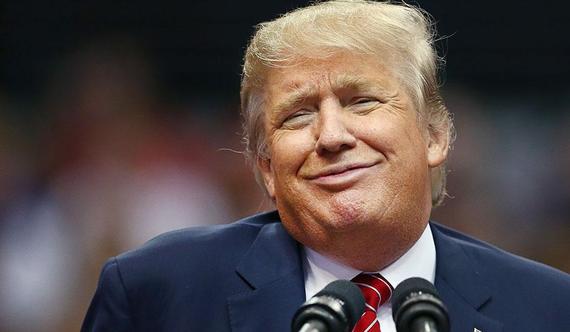 Greetings, fellow Republicans. It's my pleasure to speak before the 2016 convention of the Party of Lincoln.

I and some of the other guys have been talking amongst ourselves, and, uh, I'm sorry, we just can't do it, we can't run Donald Trump for president. I know that will disappoint his supporters, but there's actually more at stake here for us than a presidency.

Because, you know, running Donald Trump won't just lose us the presidency, it will make our party more of a laughingstock than it already is. I mean, it was bad after George W. Bush, who, I guess it's not really a secret, was, to put it kindly, a blithering idiot. Remember how he couldn't string a sentence together, and we all talked about how that made him "approachable" and "the guy you wanted to have a beer with?" Well, it turns out maybe that's not something you want in a president. And after that guy, our party was in such bad shape that we lost to a black guy. Which, I guess you know, is pretty embarrassing for us. And we've been doing a pretty good job of making sure that the black guy wasn't able to get anything done, and, well, it turns out that's not really enough. Because now look where we are. Jesus, look where we are now.

Listen. We hate Hillary Clinton. Don't get us wrong. We hate her. She's a progressive, and a liberal, and she supports things like Planned Parenthood and gay marriage and Obamacare. But most of all, we hate her because she's a woman. I know that sounds old fashioned or whatever in the United States in 2016, but that's kind of our brand, we're old fashioned, we think that straight white men were created to rule America and we're uncomfortable with the idea that maybe that's not going to be the case from here on out. But as much as we hate Hillary Clinton, I mean, just look at her resume, on paper she's at least competent, she can handle this, the country isn't going to fall apart while she's president.

You know, the "white guy" thing, that's kind of how our party got to this situation in the first place I guess. We played the race card for decade after decade, making poor white people vote for us against their interests by telling them that nonwhites wanted to steal their jobs and rape their women. That stuff didn't happen, of course, it was just us spinning the ol' paranoia story, but it worked for a long time. But, turns out, we played that card so often, we ended up getting an actual grade-A outspoken bigot for a nominee this year.

I mean, a lot of us are bigots, I'd be kidding myself if I didn't know that. But mostly we just like using bigotry as a political tool, to win elections, to distract voters from the way we run everything else, like the way we deregulate corporations and let them poison the earth and kill people and that kind of thing, the way we start wars that cost trillions of dollars while telling you that food stamp programs and arts programs and health care and education are too expensive. Ha! No, those things aren't too expensive, we just don't want rich people to have to pay taxes, because those guys keep us in office.

Anyway, I don't want to spend a whole lot of time talking about that stuff because that's all just politics as usual, it's boring. But Donald Trump isn't politics as usual, he's an actual bona-fide frog-faced pig, a vulgar, silver-spoon trust-fund brat who doesn't know anything about governance, or taxation, or administration, or foreign policy, or, honestly, how to behave like a human being. I mean, we all like to pretend that we're stupid, because that makes stupid people like us, but Donald Trump is genuinely stupid, a grotesque, loudmouthed bully, some kind of cross between Biff Tannen and Baron Harkonnen. I mean, honestly, if you can look at his face for more than a minute and find anything human in there, I have no idea who you are or how you live with yourself.

Anyway, point is, we're actually just going to sit this one out. I know a lot of you traveled a good distance to get here, and I'm sorry about that. Trump can run as an Independent if he wants to, that's his right as an American I guess, but we're not going to run him, because that's insane. We're going to go do some soul-searching and see if we can repair the damage we've done to our own party and maybe we'll see you guys in 2020. Thank you for your patience.