Suicide is an earthquake. Sudden, jolting and catastrophic, it ruptures the lives of those it leaves behind. The aftershocks ripple into subsequent generations. We spend years navigating our emotional landscapes, seismically realigned by chasms of guilt, confusion and regret. We build bridges when we share our grief, seek individual or group therapy, and work toward healing and growth.

Maybe the most ominous ravine is the one filled by stigma. It often seems impossible to cross.

Stigma is defined as "a mark of disgrace or infamy; a stain or reproach, as on one's reputation." Our society does a good job of saddling suicide with stigma. In an effort to make sense of it, perhaps, we label the person who ended his or her life. He was selfish. She was crazy. They took the easy way out. These sorts of things couldn't happen to us.

Statistics say otherwise. In the United States, someone dies by suicide every 13 minutes, and each death intimately affects at least six others, according to the American Association of Suicidology. Between 1989 and 2013, there were 825,832 suicides, leaving an estimated 4.95 million survivors behind, the AAS says.

Until Jim's death, I assumed suicide was reserved for people afflicted by excessive fame, addictions or crimes. Our culture drives these assumptions. 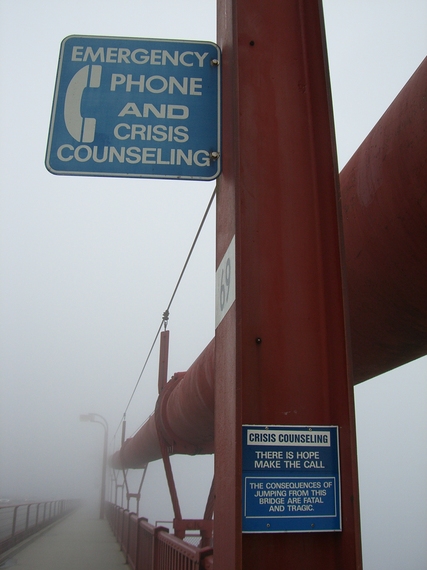 Before my brother ended his life, one of the few times suicide came to mind was when I crossed the Golden Gate Bridge, in 2008. I was struck by the prominent signs urging suicidal people to seek help. Last year San Francisco's Golden Gate Bridge Board of Directors unanimously approved funding for a 20-foot-wide steel net -- a so-called suicide barrier, according to CNN.

Author Amy Simpson backs this up in her book, Troubled Minds: Mental Illness and the Church's Mission:

Have you ever paid attention to the way people with mental illness are portrayed in popular media? While some works, especially more recent ones, treat mental illness with honesty and sensitivity, most of popular media treats the mentally ill as either frightening or funny or both. Most people don't seem to give it a second thought, but for people whose loved ones suffer from ongoing serious mental illness, such portrayals are hard to ignore.

The last 16 months have revealed flaws in my thinking. I'm bent on raising awareness about suicide and helping others prevent it. A major hurdle I'm seeing is related to stigma. It chases those who've attempted suicide, those who lose loved ones and even psychiatrists who treat suicidal patients.

In a recent conversation with my dad, I was reminded how pervasive stigma is. Jim was from my mom's first marriage, so we have different fathers. My dad was Jim's stepfather, raising him from the age of 4. Their relationship was strained from the start. My dad is the son of Greek immigrants. I never knew my paternal grandparents, but it seems they trained him not to acknowledge his feelings. My dad had a troubled relationship with my grandfather, and he repeated some of it with my brother. Once Jim was an adult, he distanced himself from my dad, but they remained civil.

In the early days after Jim died, my dad presented a stoic front. He's suggested that we shouldn't dwell on his death; we must "move on." I was surprised when he admitted to struggling emotionally, grappling with guilt over not being a better father to Jim. His medical doctor has referred him to a therapist. Yet my dad hasn't acknowledged the source of his angst, afraid of what the M.D. might think. Stigma.

It plagues those mired by suicidal thoughts and attempts, as Kevin Caruso, founder of Suicide.org, explains on the site:

Because of the stigma (the ignorant stigma, mind you) that still exists concerning mental illness, many people who need help do not seek it. Even though there is clear scientific data that indicates irrefutably that a physical connection exists with most mental disorders, many people still stigmatize others because they stupidly hold on to the misguided beliefs of yesteryear that people with mental disorders are weak or just lack will power.

Some suicide-attempt survivors are pushing back against stigma they've faced, according to a Chicago Tribune story: "They are speaking up in an effort to educate, raise awareness and reduce stigma about suicide, which advocates say is a public health issue, not a private shame."

Psychiatrists who treat suicidal patients face an especially sharp stigma. A story in The Atlantic says:

... the stigma of suicide is so strong that it's often an issue left unspoken, even by doctors. Many psychiatrists refuse to treat chronically suicidal patients, not only because of the stigma that surrounds it even in their profession, but because suicide is the number-one cause of lawsuits brought against mental-health treatment providers.

My dad's hunch is right, sadly. Even the medical field is beset by stigma. That's hard to grasp, because mental health practitioners are supposed to be a place of refuge for those battling suicidal thoughts. It sometimes infects another safe haven, too -- churches. In her book, Simpson explains in a chapter on stigma:

Although 80 percent of church leaders said they believe mental illness is 'a real, treatable and manageable illness caused by genetic, biological or environmental factors,' only 12. 5 percent of them said mental illness is openly discussed in a healthy way in their church.

Exploring drivers of the stigma, she writes:

Some churches stigmatize mental illness because they simply don't want 'the wrong kind of people' interfering with their vision for their churches ... Let's face it: a thriving ministry to people with mental illness is not the easiest or most ego-polishing kind of ministry.

No one, no institution or part of our society, is free from stigma associated with suicide and mental illness. Changing this will be an enormous endeavor. What will it require? Raising our voices individually and collectively, as some attempt survivors have. Working with our mental-health providers and places of worship, to quell fears of lawsuits and unfavorable public opinion. Examining our own misconceptions, and striving for greater sensitivity. And that's just a short list.

We must press on, in honor of those we've lost, for attempt survivors, for grieving families, and for our friends and family of the future, who one day will face atrocious battles against mental illness and suicidal thoughts.