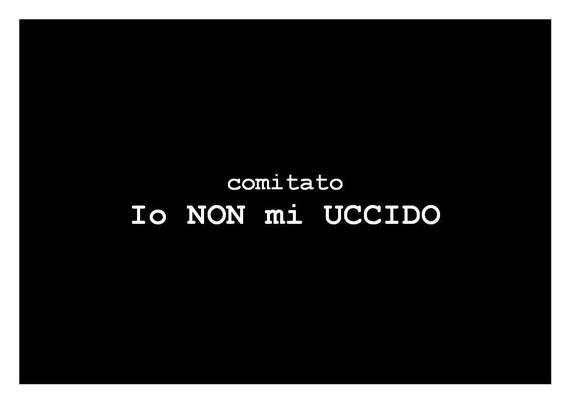 I'm Not Killing Myself Committee

Where in the world could one find a committee called "I'm not killing myself"? A rather shocking title, to say the least.

A lot of people are thinking life is not worth living in Italy. Not a day goes by without the news that once again a man or woman has been found dead by suicide. It becomes difficult not to think about the opening lines of Camus in The Myth of Sisyphus: "There is but one truly serious philosophical problem and that is suicide."

According to news service Adnkronos, about 4000 people a year take their lives in Italy; a 12% increase in times of economic crisis when people struggle to find jobs, where it is impossible for small business owners to survive the onset of big corporations. Not to mention the hopeless attempt to absolve high bank interest rates on loans meant to guarantee employee wages.

The "I'm not killing myself" committee receives countless letters from Italians who live all over the country. Pleas for help, words of desperation, callously dismissed by those who could make a difference but don't. In fact, poll aggregators have stopped tracking deaths by suicide of small business owners. Victims of the system, they are like phantoms, prisoners of indifference, invisible.

" Hello, my name is ... unfortunately my family and I have lost our home and it will soon be auctioned off. I was forced to close my business because of irresolvable issues with the bank ... I cannot deny that my family and I have thought about ending it more than once ... after years of tremendous sacrifice I don't think it's right to end up homeless because of this deceitful system ... we have no protection and no future. Please help us. I hope to have the strength to write to you again."

As I read through data, information and emails like the one above, sent to me by the committee, feelings of grief and helplessness were overwhelming.The words: "I'm not killing myself" managed to spark a dim light at the end of a very grim tunnel. For, as John Steinbeck wrote in his 1939 Pulitzer Prize winning novel The Grapes of Wrath:

"How can you frighten a man whose hunger is not only in his own cramped stomach but in the wretched bellies of his children? You can't scare him -- he has known a fear beyond every other."