September is Suicide Prevention Month, but this critical issue deserves our attention every month throughout the year.

The statistics are startling. Lesbian, gay and bisexual youth are four times more likely to attempt suicide than their straight counterparts and an alarming 41% of transgender or gender non-conforming people have attempted suicide sometime in their lives compared to just 4% of heterosexual counterparts.

The numbers are alarming and the implications of what those figures represent are even more disconcerting. Nearly half of all trans people attempt suicide. We have failed our youth if they feel so dejected that they no longer see reason to live. We have failed our community when the rates of depression and suicide remain many times higher than our heterosexual counterparts. There is no good enough reason why any young LGBT person should be marginalized or rejected to the extent that they feel they have no worth and contemplate or actively seek ending their lives. 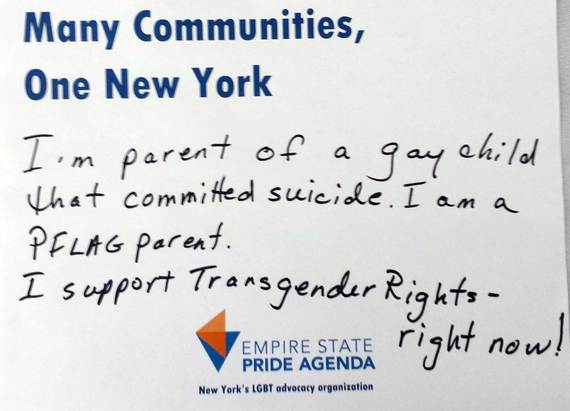 Our community remains so susceptible to depression and suicide because, although we've made great progress towards equality, we still remain vulnerable to discrimination, harassment and rejection because of who we are and who we love.

To help combat the epidemic that faces our young people, you can donate time or money to an LGBT organization that's working to combat hate and further equal rights. Our laws must protect all members of our community, and the failure to do so leave many open to discrimination and harm without recourse. Institutionalized discrimination at the highest level sends a message to other formal and informal arenas including schools, groups and teams as well as families that it's OK to put down someone for being LGBT. We know that society's stigmatization of LGBT people increases the risk factors for higher rates of depression and suicide. We're made to feel that we're not as worthy as our heteronormative counterparts. For someone who is just coming out and suffers the rejection of family, friends and community, it's easy to feel like one's world is falling apart and will never repair.

That's why those of us who survived our youth and are out and proud need to stand up on behalf of those who don't yet have both feet on the ground. We must continue to create a safer world for our youth.

In New York, we're fighting for the Gender Expression Non-Discrimination Act, or GENDA, which would extend the existing Human Rights Law to include protections on the basis of gender identity and expression. We demand that 2015 be the year GENDA finally gets signed into law and strongly believe that once the law is in place, it will send a strong message that you transgender New Yorkers deserve the same respect and access to opportunities as everyone else.

We're also advocating for a bill that would protect LGBT youth from dangerous and discredited conversion efforts. Many young people are told that who they are is not normal, or worse. Some misguided parents are lured by so-called therapists who offer a "solution" in the way of reparative or conversion practices that drive young people into social isolation, depression and suicide. This practice has no place in New York State, or anywhere else, and we'll fight until we ensure licensed therapists are stopped from harming young people.

Suicide is preventable. Each and every one of us can and should be a more active participant in helping create a better world in which LGBT youth feels supported and are far less likely to be driven to that point of desperation. Lend a hand and mentor a young LGBT person. Be aware of the warning signs of depression and suicide and be proactive if a friend is in need. Direct them to resources where they can seek professional help and make yourself available to them in whatever way they might want or need.