In the wake of Robin Williams' tragic death, rabbis nationwide will be using their Yom Kippur pulpits to open a much-needed dialogue about suicide and mental illness in their communities.

Suicide is a frightening, poorly-understood, often taboo subject. The historical stigma -- rooted, of course, in religious tradition -- persists, turning some into judgmental critics ("What did he have to be depressed about?"), rendering others silent.

Perhaps even sadder is that visceral sense that because you lost someone to suicide, there's somehow something wrong with you. (If I'm honest, even 20 years after my brother's death -- 15 of which have been spent as a professional suicide bereavement expert -- I find myself making sure to say that he graduated with honors from Yale, went on to Harvard Law School, married his college sweetheart, and was so popular that he had 11 groomsmen at his wedding. To be sure, I hope to convey who he was beyond just how he died. But implicity I'm also saying: "See? He was a great -- i.e., normal -- guy. Please don't judge him. And by extension, please don't judge me.")

Virtually everyone who hears about a suicide asks the same question: Why? It's a natural instinct to want to make sense out of the seemingly inexplicable. Taking one's own life violates a fundamental belief we hold as human beings -- and as Jews -- that life is sacred. I'm often asked whether suicide is a "choice," and of course in some literal sense it is. Yet it's a decision profoundly influenced by the hopelessness, distorted thinking, and compromised decision-making that can result from serious mental illnesses. The Mi Shebeirach, a Jewish prayer for healing, speaks of "the renewal of body, the renewal of spirit." While it's reflexive to think of those battling cancer or recovering from a stroke or accident, it's equally important to remember those among us who are suffering from illnesses like depression, which profoundly affect both body and spirit.

On Yom Kippur, we recite the sobering Unetanah Tokef, contemplating who shall perish by water and who by fire, who by famine, earthquake, plague. And who shall be at peace and who shall be tormented -- who shall be in such excruciating pain that they'll die by their own hand.

Yom Kippur is about taking stock, looking inward and ahead. As you fast, here's some food for thought:

1. Research shows that over 90 percent of people who kill themselves have a diagnosable (albeit not always diagnosed or adequately treated) mental illness at the time of their death, most often depression, bipolar disorder, schizophrenia, substance abuse, or a combination. Among young people, add conduct and eating disorders to the list; in the military community, add PTSD and the effects of traumatic brain injury.

2. Suicide is not a sign of weakness, a character flaw, or an easy way out. It's the result of a complicated stew of factors such as hopelessness, impulsivity, and traumatic life circumstances. But fundamentally, it's a fatal complication of an underlying illness, not so different from dying of heart disease or cancer.

3. Psychological suffering isn't always obvious from the outside. In men, for example, depression doesn't necessarily present as crying-all-the-time-can't-get-out-of-bed; instead, it can manifest as aggression and anger. Yet the highest suicide rates are among middle-aged and older white men (a surprise to most people). Someone can have a gorgeous spouse and great kids; be brilliant and talented; have an impressive pedigree, a fabulous job, and a dream home... and have diabetes or heart disease, right? So, too, with depression.

4. Trust your gut. As laypeople, we're not equipped to diagnose, but we can compassionately encourage those we care about to get professional help. If you're worried about someone, rest assured that it's safe to talk to them directly: "I'm concerned about you. Are you thinking about hurting yourself?" If the answer is yes, call the National Suicide Prevention Lifeline (800-273-TALK) to get guidance about what to do next. In fact, put the number in your phone contacts now so you'll have it handy in case you ever need it for someone else (or yourself).

5. What clergy and their congregants say in times of someone's greatest vulnerability resonates, sometimes forever. When they get it right, it can be life-changing, leaving the grateful family deeply connected to their belief system and faith community, restoring confidence that the world is safe. But when they get it wrong, it can leave entire families feeling so betrayed that they never set foot in a house of worship again.

6. Be compassionate, not judgmental. And even if you're unsure, reach out anyway: "I'm so sorry you're going through this. I'm here." Or, "What was his name? Tell me about him."

To the outside world, my brother was the "last one you'd expect." But at 26 he suddenly developed bipolar disorder, and despite the best efforts of his family, friends, and doctors, he took his own life less than year after being diagnosed. And those 11 groomsmen were pallbearers at his funeral.

His name was Stephen. He loved tennis, English history, anything brined, and the High Holidays.

This year, as ever, I'll be holding him close. 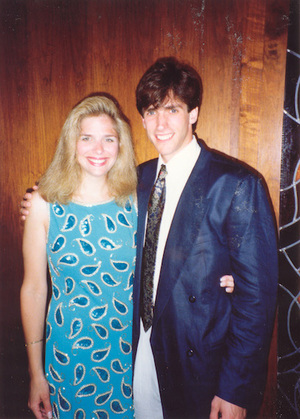