Exactly 447 years ago this month, the heart and the internal organs of Sultan Suleiman the Magnificent were supposedly removed and buried in a golden basin under his bed, temporarily alongside his body, in his Imperial Tent at the Ottoman military encampment near the Szigetvár fortress in Hungary.

On September 7, 1566, less than 24 hours after the death of the Sultan, the Ottoman army concluded the siege successfully. After this Pyrrhic victory, the death of the Sultan kept as a secret for another 47 days until his son, Selim II, came over and took the throne. As Suleiman's body was transferred to Istanbul to be buried at his final resting place, Selim II ordered the construction of a shrine at his father's temporary tomb near Szigetvar. 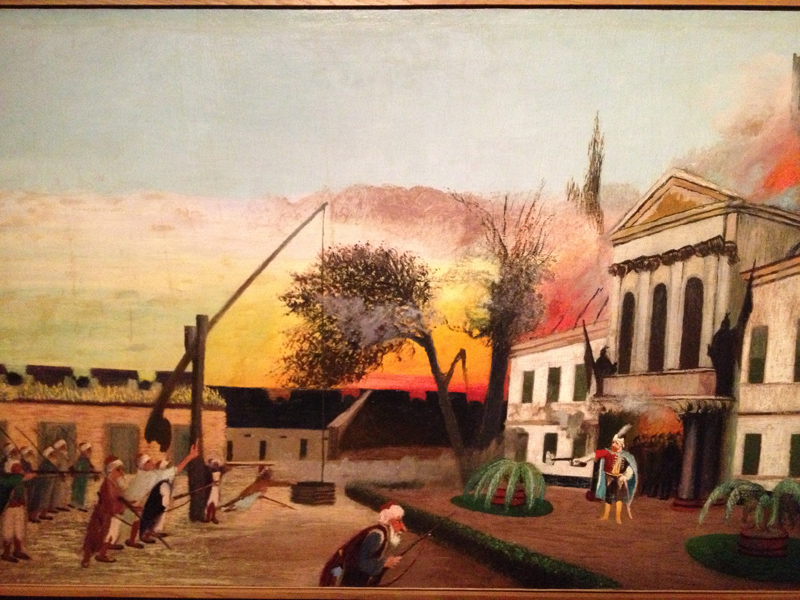 Hungarian painter Tivadar Kosztka Csontváry had depicted the suicidal charge of Habsburg commander Nikola Šubić Zrinski, who was killed with his men by the Ottoman forces in the last day of the Siege of Szigetvár.

The shrine, which was built in 1573-77 supposedly with a golden dome, was plundered and razed in 1692-93 by the Habsburg army which would ultimately repel the Ottomans from Hungary in the next seven years.

For more than three centuries, the whereabouts of the destroyed shrine remained a mystery. In 1916, a local priest hung a placard to the wall of Turbek Church that lies three kilometers northeast to the fortress, declaring that the shrine was once there. It should be more of a political gesture than a scientific revelation, as the Austro-Hungarian Empire was an ally of the Ottomans back then in the middle of the First World War.

Since the 1970s, modern research methods have been applied to locate the original location of the shrine in a definitive way, which is symbolically important for the Turkish history, as well as the history of the region.

Dr. Norbert Pap from Pecs University, the leader of the latest research, invited me to Szigetvár to cover the announcement of their latest findings on September 20. Turkish International Cooperation and Development Agency (TIKA), which invested heavily in Turkish heritage outside Turkey, brought other Turkish journalists and several scholars to the city.

Hungarian researchers simply told that they couldn't find anything near the church, but they coincidentally discovered an Ottoman-era town in the vineyards of Zsibot which lies two kilometers farther northeast in Turbek. 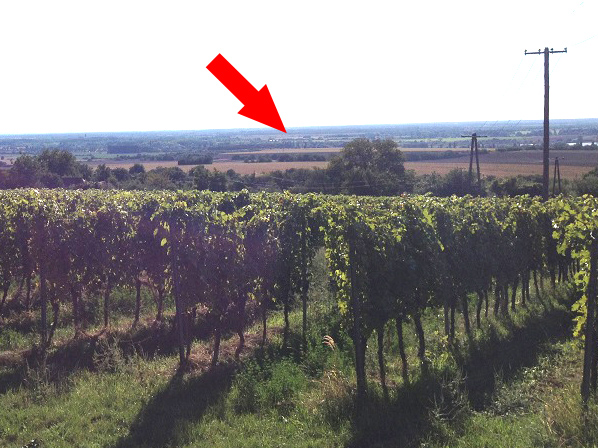 This is how the fort is seen from the vineyards of Zsibot.

If you just read the BBC News and the Associated Press reports from Szigetvár, you would think that the newly-discovered town was certainly developed around Suleiman's shrine.

But if you read the stories in the government-leaning Turkish media, like the semi-official news agency Anatolia, you would see no mention of the latest Hungarian findings. Instead, they report that Turkish scientists are now certain that the shrine was once at where Turbek Church stands today.

The truth can be somewhere in between. Although the Hungarian team is getting closer to a possible breakthrough, it's too early to jump to conclusions about the shrine. And even though the Turkish insistence on Turbek Church is mostly justified, it's unscientific to be prejudiced against the potentially valuable findings of the Hungarian team.

In the report for my newspaper Hürriyet, I quoted both sides and left to the reader to decide which hypothesis sounds closer to the truth.

There are several strong aspects of the Hungarian study. First of all, Dr. Pap's team approached the issue with a multi-disciplinary method which included not only the toolbox of history, but also of archaeology, anthropology, geography, geology, historiography, numismatics and even climatology.

In order to the compare the geographical descriptions to mark the exact spot of the Ottoman encampment, Dr. Pap's team constructed a computer model that simulated the climate of the time. The so-called Mini Ice Age had transformed the terrain then in a way that we can't recognize the region by observing the rivers, lakes and forests in today's Szigetvár.

Last April, when they excavated the pieces of Balkan and Turkish ceramics, silver coins, Chinese porcelain, Persian faience and glass in a vineyard in nearby Zsibot, they were almost sure that they found the Ottoman town developed around the Sultan's shrine.

Not only the location was compatible with their computer model, but also their initial findings were supported by the additional discovery of a three-four meters deep ditch around the lost town, as well as the remnants of a military watch tower. After all, the Ottoman sources were telling about a palisade around the shrine where 50-60 Ottoman soldiers did military service to secure the new settlement, which also included a mosque, a dervish cloister and barracks.

My own observations on the field, not with historical expertise but with the gut feeling of a journalist who once served in the Turkish military as a logistics sergeant, confirm that the Zsibot area should be looked into more thoroughly.

When I visited Turbek Church, I was surprised to see that it doesn't make any sense to put the commander-in-chief's headquarters there, as the besieged fortress couldn't even be seen from the flatland. However, even though it's two kilometers farther northeast, the fortress and the warzone around it could be easily observed from the hilly vineyards of Zsibot. 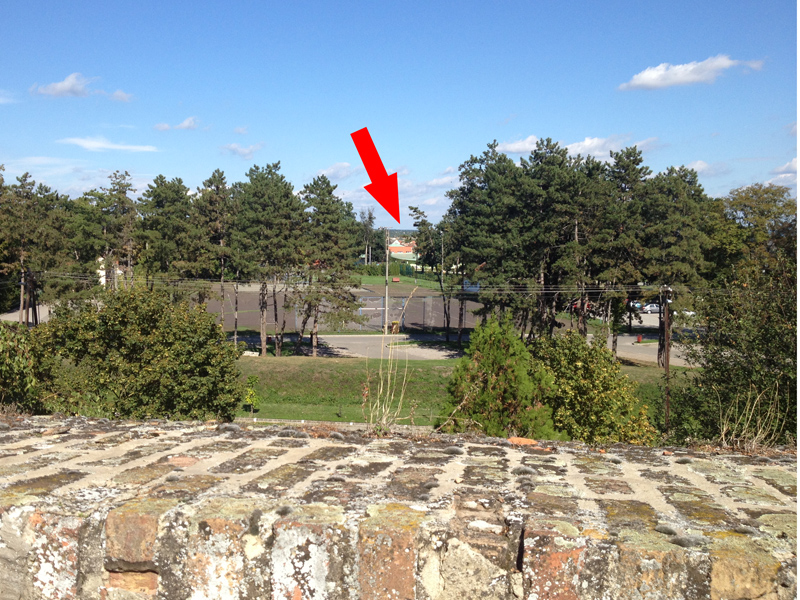 From the fort, which still stands, the hilly vineyards of Zsibot can be seen, while Turbek Church cannot.

Gut feelings are not enough to come to scientific conclusions, though. Turkish experts whom I spoke to pointed out to the shortcomings of the latest Hungarian study. "For instance, some of the excavated pieces of Iznik tiles should have been dated to the 19th century, not the 16th," leading Turkish art historian Professor Nurhan Atasoy, who inspected the sites and advised TIKA in Szigetvar, told me.

Dr. Fatih Elcil of Istanbul University, the only Turkish member of the Hungarian excavation team, confirms that nothing could be found around the church, but added that "we can't be sure that the shrine is not there, as long as it's not discovered elsewhere."

While supporting the excavations at the site of the new discovery, Turkish experts call a more thorough exploration of the church grounds, too, because it's assumed that the alluvial deposits accumulated over centuries possibly made it much harder to discover the foundation of the shrine there.

One Turkish historian even suggested that the Hungarians might have been trying to "clean off the Muslim stain" from the church, which was a place of pilgrimage for Catholics in the 18th century, after a reported appearance of the Virgin Mary there in 1705. The Muslims who visit Hungary also go to the church to pray for Suleiman and it creates "a clash of shrines."

To summarize, the latest episode in chasing Suleiman's heart showcases the limited cooperation and trust between Turkish and Hungarian scientists, as well as the shortcomings of the national and international media outlets.

"The golden basin" that supposedly held Suleiman's heart is almost surely a myth. It's harder to speak about the existence of the golden dome and whether the internal organs were removed or not with a similar certainity. With more excavations around the church and the vineyards, the foundations of the shrine can indeed be found.

As Hungary's Ambassador in Ankara, Janos Hovari, as well as TIKA President Serdar Cam, told me, the most important aspect of the issue is how it can unite us internationally. In Budapest and around Szigetvár, Hungarians are already cooperating with TIKA in seven projects to revive the common history. "These are our shared memories and both countries have a centennial vision to remember and remind them," Hovari says.

Suleiman the Magnificent, who once conquered Hungary as an "enemy", also wrote beautiful poems with his alias Muhibbi, which means "friend" in Ottoman Turkish. Today, his heart initially triggered a clash between Turkish and Hungarian scientists, but then united them again in harmony.

Ankara and Budapest have provided additional funds to excavate the old and the new archeological grounds in Szigetvár for the next three years. "We think it's possible to find the shrine by 2016, the 450th anniversary of Suleiman's death," Hungarian archeologist Erica Hancz told me.