An obnoxious whine breaks the jungle tranquility, intruding on the bird calls beneath the towering tree canopy. Timber companies, mainly Malaysian-controlled, are chainsawing their way right up to the frontiers of Gunung Leuser National Park, a UNESCO World Heritage Site in northern Sumatra that is the final refuge of the magnificent red Sumatran orangutan.

High in the branches, a vivid orange-red blur stirs behind the green leaves -- a young male slowly swinging his way in search of fruit. On a nearby tree whose massive lower trunk is split in two like the portal to a vast natural cathedral, a female walks and swings along a branch with her son, about five years old, according to local guide Jhon Kanedi, christened JFK by Lonely Planet due to the similar name. By now inured to the sound, Asia's last remaining apes pay no heed to the whine. 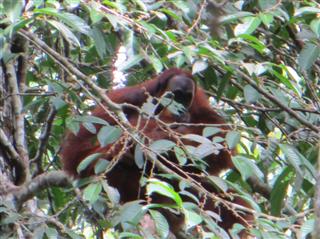 Young male orangutan observes from high up in foliage

Yet it is this whine, along with poaching and other human activity, that has prompted the International Union for the Conservation of Nature (IUCN) to put the Sumatran orangutan on a list that is the same color as its gorgeous fur, the red list -- critically endangered, just one step away from extinct in the wild.

Up a steep rain-forested hill a few hundred yards on, another female walks and swings along a high branch, her four-year-old son following close behind. She grabs and bends a branch of a neighboring tree and moves across with agile grace. She breaks off part of a branch and throws it down -- to show her displeasure at our presence, says JFK. In doing so she releases an army of ants. Her son gets bitten and lets out a whimper. She gathers him up in her arms and kisses him, just like a human mother. 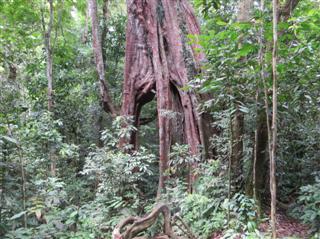 Sumatran orangutans, with a life span of up to 60 years or more, now number only about 6,600, far fewer than their less vividly orange Borneo cousins, whom IUCN lists as merely 'endangered,' with an estimated total of some 45,000. The two groups are the last remnants of the hundreds of thousands, perhaps millions, of orangutans who once populated vast swathes of South-East Asia. 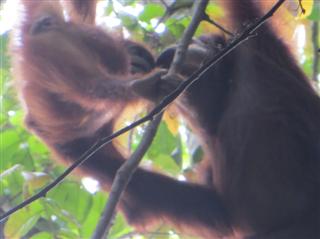 Here, near the little village of Ketambe, in the dense mountainous rain forests of Aceh, Sumatra's northernmost province, you are literally at home with the orangutans, in their territory, on their terms, much more so than at the Bukit Lawang rehabilitation centre in Gunung Leuser's south-eastern corner. There they are fed, and are much more used to tourists.

At Bukit Lawang, they stand right before you and pose for your camera, females with babies, juveniles, and massive males over five feet tall, weighing up to 200 pounds or more. But they may also tap your arm for food -- and bite you if you don't give them any. There have been 26 such cases this year just up until June, according to JFK. 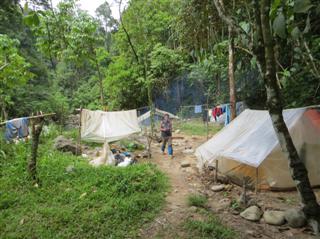 Here, your sightings will be natural, even if more distant and fleeting. Here you'll bed down in the wild on a hard rocky river bank by a gorge, the small and only permitted camping site. At Bukit Lawang you can choose a homestay or hotel. 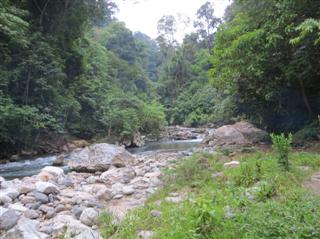 Back at the cathedral tree, a prime fruiting site, another mother moves in, her month-old baby clinging to her fur. She puts the infant, sex indeterminable from here below, on her foot and swings it up and down, just like a human mother playing with her child. Again the chainsaws rev up. 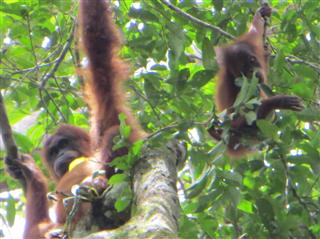 It's not just the tree felling on the periphery that threatens the orangutan with loss of habitat and extinction as vast swathes of forest are cleared for agriculture and palm oil plantations. Timber companies flush with money to bribe and officials avid to be bribed have seen to it that protected areas have also been torn down. A scab of felled trees just across the river attests to illegal logging, says JFK. Worst of all, poachers kill the females to kidnap their young for an ever-ready exotic pet market. 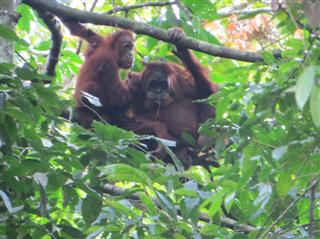 On an afternoon trek we miss the king, the alpha male of this group, although we hear his gulp-grunting calls. Others from the river-side camp have better luck. They find and follow him for two hours as he swings and walks along the branches. Their guide hits a tree with his machete to get him to react, they say. And react he does. He's furious, grunting and violently shaking the branches. But it's not the guide's stupid machete blow he should be worrying about. It's that relentless chainsaw whine. 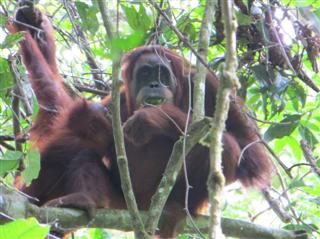 Another mother and child moment

Orangutan Conservancy, one of several organisations trying to save the great ape, cites experts who estimate that orangutans could be extinct in the wild in less than 25 years. It says they have lost well over 80 percent of their last remaining habitat in the past 20 years. The IUCN warns that if the Indonesian government gives the green light for the Ladia Galaska road network in Aceh, it will rapidly fragment most of the ape populations, as will the re-issuing of logging permits.

We set out again next morning. From experience JFK knows just where the king will be - at his favourite fruiting haunt, the massive cathedral tree. He's spot on. There he is, sitting regally on a high branch. He stretches out his long arms and legs, a seven-foot span or more, and swing-walks along the branches, bending each until he can reach out to the next, never free-jumping between them. 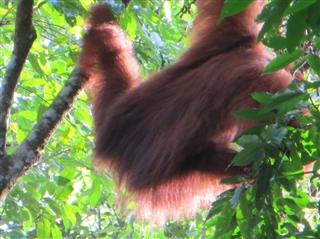 Enter the king - from the rear

He pauses, eating fruit and leaves. JFK says he's 55 years old and weighs almost 200 pounds. But his predecessor is estimated to have weighed in at 400 pounds, so says JFK. He moves on again, slowly, in stately fashion, eats more leaves and berries, and rests. The chainsaws still whine away over the call of the hornbills and the whoosh of their wings.

There's a stirring again in the leaves high above; His Majesty decides to move on to the next tree, and the next. We troop along beneath him up a steep narrow slope. With surprising speed and agility he descends to the lower thicker branches. Kings do this because the thinner higher branches do not support their weight so well. Now he's barely 10 feet from us. He's truly massive, much more so than he appears high up in the tree tops. 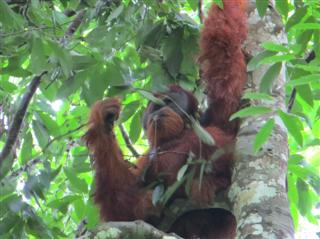 The king - that wretched manicurist screwed up again

The bright red-orange fur on his back is long and hangs loose from his arms and legs. He turns his head and intelligent eyes momentarily towards us, his bright orange-red beard adding to his handsome features, the ample cheek pads of a sexually mature male stretching between his eyes and ears like a ruff framing his face.

Of course, me being me, the camera battery runs dead at just this moment, and even though I've brought an extra battery along with me, I've left it at the river camp - hence no closeup shots.

In no time, he is up the tree again and passing on to the next, and the next. We follow up ever steeper slopes. He starts grunt-gulping. He wants some female company, says JFK, but most of the females give him a wide berth, so to speak, since he is a rough lover, he adds. Today none obeys his summons. 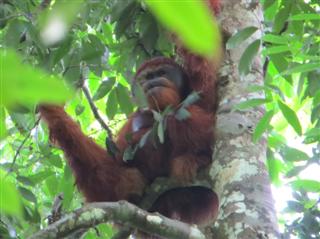 Come on girls, where are you?

Once again he descends to lower branches, again barely 10 feet from us. He's truly fantastic with his massive chest and thick arms and legs, so much larger than any of the others we've seen. Then he's back up the tree again. Orangutan in Malay means people of the forest, and it's not hard to see why they are thus called. Yet although the male orangutan is not as strong as a gorilla he is about seven times stronger than a human.

It starts as a few drops of rain - and it's not even all that cloudy. The drizzle becomes slightly more persistent. Then it dawns on me just as it hits me - His Majesty is peeing. Wow, a great ape golden shower! If you get seven years good luck when a bird craps on you, how many more do you get when a dirty great orangutan pisses on you! Success at last! 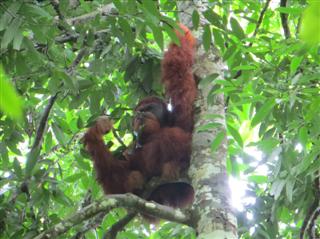 Ahhh, I needed that