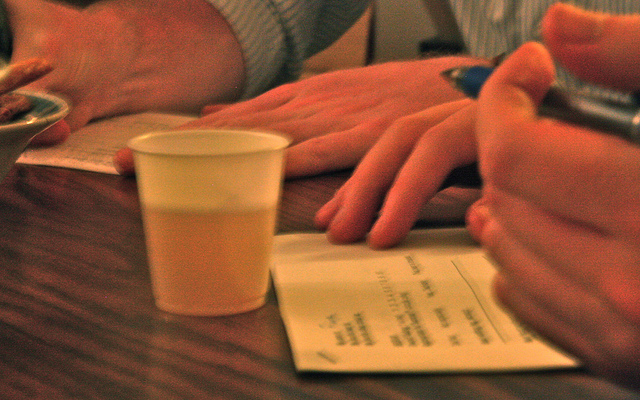 Ahh, summer! Nary a warm breeze wafted o'er my sunkissed cheeks before I thought: man, I could really use a beer right now. In the colder months, I like to sip red wine with my dinner, or treat myself to an olive-y martini. But something about the impending heat (and boy, are New York Summers brutal) puts me in the mood for a cold, crisp beer.

With the hundreds of breweries turning out seasonal ales-local and foreign, micro and macro, cheap and expensive, other adjectives only the beer geeks know-how's a girl to choose her signature summer ale? Fear not! I have conducted a tasting of 9 beers, each unique and special in its own way, and put together this handy cheat sheet to make the choice easier on everyone.

Tasters found this beer light and refreshing, but easily overpowered by the bowl of spiced nuts we had been snacking on. This beer has a little bitterness, but is tasty and nice enough to bring along to a party or a picnic with friends.

Blue Point Summer Ale (NY)
Overall rating: 6.5/10
4.4% alcohol by volume
Ideal setting: backyard BBQ with friends
Drink this with: pulled pork; burgers and dogs.
NB: This was a favorite among tasters who are not beer drinkers

Tasters found this one smooth, and even a bit "watery," although as one remarked, "I could drink this in a large volume"-which says something, being as said taster is a self-proclaimed non-beer drinker. While some may be disappointed that it doesn't have an assertive flavor, that does mean you can drink a bit more of it. This bottle's smooth finish makes it ideal for washing down something from the grill on a hot summer day.

Everyone agreed this was one of the more bitter options we tried, with a strong aftertaste. No one was particularly moved to drink this again, although the consensus was that it would be ideal at a baseball game. Maybe something about it makes you want to yell at people?

Harpoon Summer Beer (MA)
Overall rating: 4.7/10
5.0% alcohol by volume
Ideal setting: on a shoreline-by a river or a bay. Don't ask me why. This was the consensus.
Drink this with: seafood; salad; something sweet

This beer was crisp and a bit bitter, rating just about average among tasters. Everyone agreed they would want to eat this alongside fish or outdoors on a breezy day. Overall, it's very drinkable, but just nothing special. Drink this if you're looking for something relatively low in alcohol and/or you're having an outdoor meal on the water.

Bud Light Golden Wheat (Anheuser-Busch)
Overall rating: 5.5/10
4.1% alcohol by volume
118 calories per 12 oz. bottle
Ideal setting: strolling through a cornfield
Drink this with: cherries; fruit salad; basic American fare.
NB: This too was a favorite among tasters who are not beer drinkers

I couldn't possibly put it better than the product page itself: "Are you thinking 'WTF?!' We thought you might." The inclusion of this beer in the roundup was my primary reason for making it a blind tasting. The group of tasters included both non-beer drinkers as well as a few connoisseurs, and I had to throw this one in to see the general reaction. Surprisingly, this rated quite a bit higher than I anticipated. For the tasters, this beer called to mind "cornfields," "grass smells," and "Ohio," and nearly everyone suggested drinking it with something sweet and "American" like cherries, or french fries-something basic. As for the flavor of the beer itself, it was undeniably sweet and fruity, much less hoppy and more wheaty than its peers. However, most agreed that you just couldn't drink too much of this without feeling sick. It's not a bad option, though, if you're looking for something light on the wallet (and the gut).

Although one taster remarked that it "grew on her," most agreed that this beer was just not up to snuff. A mostly bland beer, the flavors that did come through (honey, floral notes) disappeared pretty quickly. One taster likened it to "liquid molasses," though with a less intense flavor. It's not a bad beer-but I almost found myself wishing it were, if only so it would have some flavor profile at all. Skip it.

I included this because I thought we should taste an imported brew alongside all these domestics-and there was definitely a difference. As compared to some of the other thinner, mass-produced American beers, this beer's taste felt intentional, and more full-bodied. You probably wouldn't want to drink this on its own, however. The consensus was that this beer should wash down something substantial like a meatball sub or a pepperoni pizza. It is a good summer option, since it's light in color and well-carbonated, but not too fruity or floral as many summer brews can be.

This beer had an intense, immediate flavor that didn't linger long. It was a bit bitter, slightly citrusy, and certainly one of the wheatier beers we tasted. Some found the flavor a bit cloying, and the taste a little watery overall. One of the tasters was surprised at how little he liked this, since he is a frequent Sam Adams drinker and an avid supporter of the American Revolution-but tastebuds don't lie. This one felt like the product of a big brewery rather than a microbrew, and it suffered for it. It certainly wasn't a bad beer, though, and everyone pretty much agreed that it would go really well with fried fish: what's more summery than that?

This beer is described as a Czech style Pilsner, but it definitely tasted different than the Urquell, and overall, tasters seemed to like it less. Much like the Urquell, though, this beer has an assertive flavor that lends itself well to sharper foods. Try it with a sharp cheddar or a grilled cheese, or a side of parmesan fries. Overall, this was a solid beer, but not the best of the evening. It is a good option, however, if you're looking for something with a bit more bite and a little more alcohol.

Lily Bellow graduated in 2009 from Harvard University with a degree in English Literature. While in college, she bartended and cooked at the campus pub, and as a result has a difficult time eating chicken wings. She is currently the Assistant Managing Editor for Small Kitchen College.