These 15 new books for May include stirring new fiction from Isabel Allende, a memoir from a 6'7" librarian struggling with Tourette's syndrome, a hilarious novel of a young man's job as a bird tracker and more.

Book Recommendations OWN Simplify Your Life Own Books Summer Books 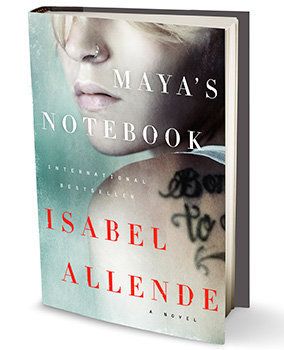 1 / 15
Maya's Notebook
<em>By Isabel Allende </em> "I turned sixteen and my family crumbled away," writes Maya Vidal, narrator of Isabel Allende's gripping new novel, <em><a href="http://www.amazon.com/Mayas-Notebook-Novel-Isabel-Allende/dp/0062105620/ref=sr_1_1?ie=UTF8&keywords=mayas+notebook&qid=1368808138&s=books&sr=1-1&tag=thehuffingtop-20" target="_blank">Maya's Notebook</a></em> (Harper). Maya was raised in Berkeley, California, by her Chilean-born grandmother, Nini, and grandfather, Popo, whose death from cancer leaves her reeling. The downward spiral that follows lands her in court-imposed rehab and an even deeper descent into drugs, violence and crime on the streets of Las Vegas. Her savior? A nurse name Olympia Pettiford, "Madonna of the defenseless." As Maya's yearlong diary begins, she is running from both sides of the law. Nini has sent her into hiding with her old friend Manuel Arias, an anthropologist who lives in a remote village on the southern coast of Chile, on "a tiny island so small it's almost invisible on the map, in the middle of the Dark Ages." By now Maya is a 19-year-old with hair dyed four colors and "residues of the wild life" running in her veins. In a land ruled by storms and tides, with its lingering tradition of magic and sorcery, she finds refuge. But for how long? Allende has earned an international following of millions since the publication of her 1982 novel The House of the Spirits. Here she retains the storytelling magic that is her signature, while deftly juxtaposing the alternating universe of the past -- including Child's dark history of political terror -- and present. At its heart, though, this is a tale of a girl's journey toward self-discovery, of the fierce power of truth, and of the healing force of love. — Jane Ciabattari
Marko Metzinger/Studio D