All photos courtesy of Melissa Azulay.

I've never been to summer camp. Always wanted to. In my 14-year-old fantasies, it was a place you sat on a dock at dusk with the best friend you wish you had at home, telling her your deepest and darkest until a sporty, pony-tailed counselor dragged you kicking and screaming back to your bunk. I was Kristy McNichol in all her feathered-hair-and cut-off-jean-shorts perfection. My best friend a street-wise cross between Blair from The Facts of Life and Molly Ringwald.

I'm 50 now and couldn't squeeze an arm through either leg of Kristy's jean shorts, but I got a taste of camp last weekend. It was all I'd hoped, albeit without Matt Dillon eyeing my curves from across the lake. 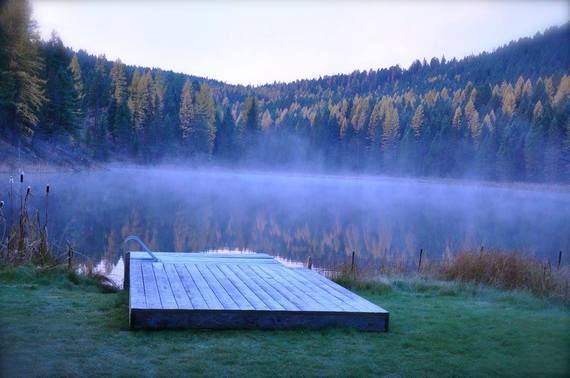 I sent myself to writing camp in the woods of Montana. A retreat actually. Twelve women sat in a circle for three days, warmed by a crackling fire, hot tea, and animal-free food creations that would melt the souls of even the most die-hard bacon lover.

Guided by our leader, writer Laura Munson, we wrote with abandon. Laura gave us "prompts" -- a few words to include in what we were writing and 10 minutes during which time our pens must move. Mine sailed across the lines, releasing what's been bottled up for years with ease and joy. I felt freer than I have since I was 12-years-old, flying through the air on a neighbor's zip line.

Twelve is when you birth your inner critic, I learned. That may explain why I've always felt 12 -- prepubescent pimples erupting within while struggling to maintain the unblemished veneer of normality without.

Don't think. Trust what's in there to come out. Let it bypass the "scared, little girl with a megaphone," as Laura described our head noise. If your intuition, your trust lives, so do you. If the scared little girl triumphs, you're just one of our many walking wounded.

Writing's been the one thing I've wanted to do since I was 5. Lying on our living room's blue shag carpeting making up stories to go with the comics I could not read while my sister grew more and more engrossed with Hagar the Horrible, Peanuts, the Lockhorns, and eventually just tuned me out.

I've written on and off through the years but never with complete commitment. So, at this point, my scared little girl has morphed into a 300-pound weightlifter with one monstrous megaphone.

"Get out of your own way." I've heard that before. I've done Landmark for chrissakes. But it wasn't until I consciously felt my soul running roughshod over my mind did I get the power and freedom in those words.

Way back in third grade, as a new kid, I started editing my speech so no one would notice my healthy vocab and innate weirdness. Unfortunately, what I thought was a kind gesture that would make me more likable was the beginning of a self-esteem-sucking journey of dumbing down who I was. By not honoring my true gifts, I'd passed the megaphone over to a little girl hell bent on pleasing others with little thought for her own well-being.

My version of summer camp also offered something called "equine assisted learning." As someone whose one horse-riding experience years ago resulted in an unplanned jaunt through the Mexican countryside, I viewed horses as stupid, large and strong. "They sense fear," I learned while sliding off my horse into the pool of jello that had been my legs.

With a now entrenched, sweat-inducing fear of anything horse-y, I had to go.

We didn't ride them so much as "be" with them. I entered a large field with my camp friend, Melisa (more Tatum O'Neal than Molly R.) where 30 horses milled about. Sections of the field were cordoned off with loosely strung electric wire. My mind flew to visions of my Mexican horse noshing on long, yellow grass, the feeling of my legs clutching his torso, while my mind begged him to get it together and join the others. As we walked into the field, the horses approached, and I felt all the unknown insecurity of speed dating. Would any of them pick me over the much younger and prettier Melisa?

Breathe. Don't touch the live wires. I didn't want to let down Bobbi, the independent, salt-of-the-earth ranch owner, or seem weak to her. Two majestic horses noticed me but didn't stay. And so it went.

Then I saw Star, a gray, slope-backed pony ridden by Bobbi's 27-year-old daughter, Cedar. Cedar has Down's Syndrome like two of my aunts, so I knew Star would be gentle and sweet. He was a soft furry bundle of warmth wrapped in an all-encompassing horse hug. I stroked the sweet spot down his shoulders while Bobbie talked about all the times Cedar painted and dressed him. 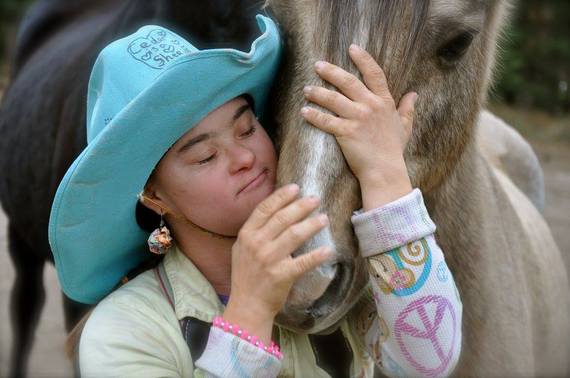 There were 29 more horses and a wide open field yet to explore, so encouraged by Bobbie, I walked on.

She said horses put their muzzle where they feel you need their energy the most. So far, they'd been nosing around my waist. Muffin top intervention? Bobbie asked me to look up. I was surrounded by six geldings. One kept pushing his muzzle into my stomach.

"How much do people push your boundaries?"

She told me to gently nudge the horse with the back of my hand.

"Go ahead. He won't take it personally."

I did. He moved his face away but stayed put. They all did. At the time I thought they were showing me that I belonged -- a rare feeling for me. But now, I realize it goes deeper. By surrounding me, they were telling me "We're taking care of you. You're safe here."

And my stomach? That's where we smash it all down like an emotional trash compactor. Decades of bottled-up desires, words unsaid left to rot. I now hear what my horse friends were saying: "be like us, live here, now, trust yourself, and most important of all -- drop that megaphone, girl." 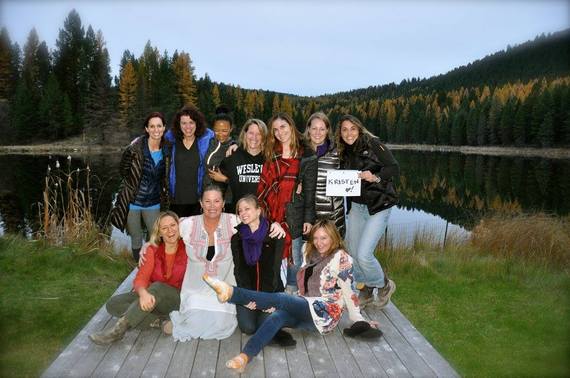