In Palm Springs, temperatures in August easily soar past 100 degrees, but that didn't stop the fun at Splash House earlier this month. Thousands of festival fans made their way out to the desert and partied poolside to the sounds of the newest and coolest electronic music artists. 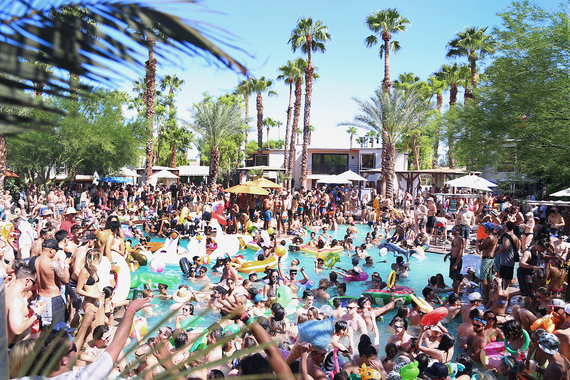 On August 13th and 14th, 5,000 people made their way to The Riviera and Saguaro hotels for hours of festival fun in the Palm Springs sunshine. A number of emerging electronic music producers provided the soundtrack with artists like Gorgon City, Snakehips, Hudson Mohawke, SNBRN, Lost Kings, and more DJing during the two-day event. And for those looking to continue the fun after hours, attendees could make their way to the Air Museum to continue the party with Rüfüs Du Sol, Claptone, Chris Lake, Hotel Garuda, and more.

With the incredibly large number of festivals out there today, they could all start to seem the same after awhile. But that's not the case with Splash House - this is easily a one-of-a-kind event. The event has a unique setup with performances at both hotels and the air museum. Picture a Las Vegas pool party with a little less in-your-face hype and a lot more chill vibes and you'll get the idea. The event is often described as a "boutique festival" given the smaller number of attendees and carefully curated lineup.

Another Splash House event took place earlier on in the summer. Also over two days, the June 2016 event featured a whole other set of artists including Odesza, Jai Wolf, Flight Facilities, and Justin Martin, making it a whole different experience compared to the August lineup.

Splash House began just four years ago and was started by Tyler McLean, who described himself as "a college kid throwing parties" back then. Now only 25 years old, McLean has partnered with Goldenvoice (they do a little festival called Coachella every year, which you may know of) as co-promoters of this music festival experience. "We're co-promoters," he said when describing the relationship. "50-50 equal partners on this thing."

A summer celebration in the hot Palm Springs summer may seem like a not-so-good idea. "[I'm] crazy enough to figure out a concept to throw a festival out in [Palm Springs] in the summertime," McLean explained. However, considering both days and the afterparty were sold out this year, it's safe to say he came up with a pretty excellent idea.

When asked what makes throwing an event like this possible, McLean said that it's a variety of factors that make a festival come together. "[It's about] grinding," he stated. "It's not anyone one thing." Clearly all of those things came together this year as Splash House was a huge success.

Splash House has seen tremendous growth in popularity over the past few years and it will be interesting to see what's in store in 2017. If good tunes by the pool with your festival squad sounds like your idea of a good time, you'll want to be on the lookout for next year's events. It may still be a little on the early side to know any details yet, but you can subscribe to their email list and check out the aftermovie over at splashhouse.com.