Los Angeles is a paradise when it comes to artist studios. There is no such thing as five-story walkups with no hot water here. Keep your big apple, there were snacks waiting for me and my crew at almost every stop. Anthony Ausgang offered us iced tea on the far side of his driveway overlooking Echo Park and Downtown L.A., Carol Es had cookies and crackers at the wait as she guided us from her garage studio to a room inside her Spanish revival cottage in Alhambra to show us some larger sculptural works.

Kim Dingle closed the restaurant she ran in the front portion of her Eagle Rock studio to get back to painting full time, but she had champagne on ice for us. I peered into the studio of Oliver Arms from the upper deck of an Amtrak train leaving town one morning last fall and for all its urban grit, the large shade tree at the entrance and the cooler of bottled beverages made for an enchanting afternoon spot to enjoy his rants about contracts and art fair deadlines. Paradise. Painter Joe O'Neill confesses that he often sets down his brushes for a dip in the pool - the pool house at a friend's place being his studio for more than a decade.

Vito LoRusso and John Schlue share a studio by the concrete LA riverbed and some desolate train tracks. Fighting traffic is not the issue as much as jockeying for a parking space amidst regularly occurring film crews in dire need of the visual authenticity that their small parcel of gravel provides. When we make it to painter Lili Bernard's Chinatown studio, we've been refreshed by a stop to a small Vietnamese cafe and Lili's generous assortment of fruit juices only makes every one of us wonder: What are those poor starving artists in New York City sweating over?

The artists we visited were:

• Oliver Arms - Represented in New York but not in Southern California, this San Francisco transplant has mastered a method of belt sanding oil on canvas pictures into atmospheric abstract masterpieces.

• Anthony Ausgang - Long known as the comic-inspired anarchist who made a name for himself by adding slick animated scenes of naive thrift store oil paintings, Ausgang has seen a renewed interest in his work as its precise painterly aesthetic has stood the test of three decades amidst changing art world tastes.

• Lili Bernard - While art schools are brainwashing students to focus on one or two simplified formal elements and a clever concept as packaging, Lili Bernard stands as the complete opposite of everything fashionable in the jaded art world, composing energetic expressionistic pictures of heroic Orishas, saints, slaves and even politicians with a dramatic, revived palette.

• Kim Dingle - Represented in New York but not in Los Angeles, her expressionistic scenes of prepubescent feminism are the benchmark of assertive, apolitcal feminism. Her wildly independent figures predated the RiotGrrrl phenomenon by a decade and the fighting femme archetype of Kill Bill by twenty years.

• Carol Es - Represented locally and exhibiting prolifically, Carol walks a tightrope between autobiography and poetic transformation. Her paintings incorporate touchstones of the naive and personal with an intimacy of abstracted childhood motifs and the dark humor of mortality.

• Vito LoRusso - A painter of textures to the point of sculpture, his fascination with the surface and its build up is quintessentially a Southern California concern. And unlike most everyone in traffic here, he is a native!

• Joe O'Neill - His strength is a breadth of styles that sways from sign-painting and rigorous illustration to expressionistic portraiture. Never afraid to experiment, he has been known to pick up hunks of plywood he encounters while surfing and turn them into his next big picture.

• John Schlue grew up in Iowa a few acres away from the farm house depicted in Grant Wood's American Gothic. After being saturated in this regionalism, he took the magic of seeing Jackson Pollock's Mural every day at the University of Iowa with him when he moved out west, working as big as he works non-objective.

What you will find amidst the sprawl of the Southern California is that artists are generally pleasant in their own environment and happy to discuss their work. The topics of art world gossip seemed trite and silly when the possibilities of what goes into making a picture were broached. The materials are hardly discussed, the paint is seen as a vehicle. The ideas and emotions are the epic topic tying in all of these players. Outside of the slick galleries and away from the insincere publicists and pitchmen, the painters and object makers let their hair down, uncork a bottle of wine and revel in discussing the pictorial possibilities they alone can control. 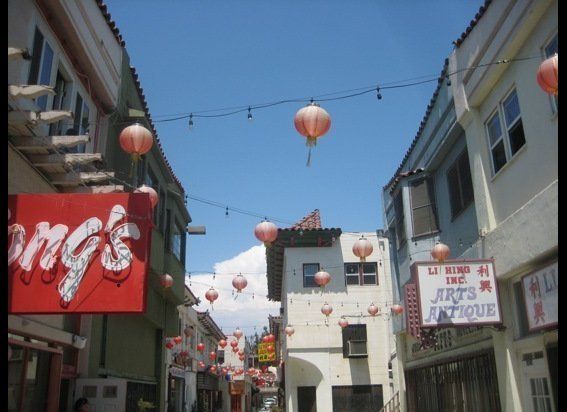 1 / 21
Chinatown is not just Galleries and Gift Shops
LA's Chinatown has seen artist studios thriving amidst the gift shops and art galleries.