With the bubbling volcano of school activity cooled down, and the temporary end of hassled days consumed by homework and lessons, the fair season of summer began, and with it, my travels around the globe. In the course of some two and three-fourths months, I explored the Amazon, encountering strange plants and people, then afterwards, a trip to Europe, where I sipped black coffee and solved mysteries, followed by a journey to Asia where I met lost emperors and scheming empresses.

I voyaged 20,000 leagues across the seven seas, searched for buried treasure while outwitting clever pirates, saved a man from cannibals on a remote island, was almost trampled by a dinosaur in the center of the earth, and stubbornly sat in a dingy boat, as sharks circled round and round. The world was my oyster, and I traversed throughout it-all from the safety and comfort of my room.

In the ink-filled pages of books, words transformed into actions, descriptions into scenes, as my mind became a theater, with the playbill reflecting the novel I held in my hands at the moment. A degree of acting was employed whenever my imagination wandered in a novel-I became a character in a play, my actions and words a mere reflection of a temporary personality, a person other than my usual self.

There was a certain magic about the books, transportation devices that whisked me from one land to another, my body remaining in my chair, but my mind traveling across, above, under, and outside the world. The magic had always been inside the books, but in the sweet haze and carefree days of summer, the wonder of books and sudden time to consume all my hands could hold was enhanced. Walks to libraries and bookstores became daily and weekly routines, as I borrowed or purchased mountains of novels. The time that had been subtracted from my desired reading time by schoolwork and activities was being made up for by each page I read, as lost time turned into all the time, and a book in hand became my standard accessory.

The typical staples of summer, the picnic basket trips to the beach, visits to amusement parks and lolling about in the sun remained, but the sudden amount of free time yearned to be filled. Books were the filling of and between days of frolicking around strawberry fields forever and sipping homemade lemonade, between outdoor play and inside reflection.

The books were not a substitute for traveling -- but they were supplements, fantasy adventures constructed between and throughout a car trip to another state, a cruise to another land, a flight to another country. The absence of teachers and a solid space dedicated to education was not the absence of learning, and the books became my teachers, this one lecturing on how to escape a pack of bandits, that one a lesson on how to survive on a desert island.

Time, so sparse and frugal during the school year, was suddenly heaped upon me by the day, elongated and extended by the adventures springing out of books. Hours could be spent on a trip to a dark trading post, going deeper and deeper into the heart of darkness, on a quest for revenge with a man wronged by his enemies, but now endowed with grand fortune, on a voyage with a captain blinded by a self-destructing desire-but when the journey ended and the book became a book again, nothing in the world about me had changed.

No one else seemed to know, seemed to notice that whenever I closed a book I was concluding an adventure, fresh from the success of one character or the death of another, overwhelmed by the journey I had just taken. There was a secret smugness and pride in that, to know that you alone were privy to the gems inside books, had undertaken fantastical adventures that were purely yours. But there was a pang of sadness too, of regret that others could not experience the same feelings, share in the joy or grief of imaginative ventures transformed from ink and paper.

In such an age of technology, amidst gadgets filled with all the world's information and able to fit into a pocket, high definition televisions, and slim laptops, books have still prevailed, reigning throughout the centuries. Some have been digitized and turned into typed words on screens, with whole libraries inside a handheld device, but throughout history, throughout the wars and the conquests and the revolutions, around the world, books and reading remain universal, available to many people worldwide. A global treasure of stories and lessons, a wealth of history and knowledge braving the ages, a gift through the past, the present, and the future.

As dragons hoard precious gems and gold as their treasure, so books became my treasure, as the number of books lying around my room grew to outnumber the random knickknacks and the piles of volumes was transferred onto shelves, becoming a library. Past the cheesy tourist souvenirs and postcards from my travels, past the scrapbook pictures and fleeting memories, the library was the hallmark of my summer, the product of my labors and token of my adventures. How I spent my summer vacation. But even as the sun cools down and the days become shorter, and summer gives way to autumn, the reading and learning will not. And as time progresses and my travels continue throughout the year, more books will be added and the library will grow, along with my knowledge and adventures.

Recommended books:
• Atlas Shrugged by Ayn Rand (anything by Ayn Rand really)
• One Hundred Years of Solitude by Gabriel García Márquez
• A Confederacy of Dunces by John Kennedy Toole
• Catch-22 by Joseph Heller
• Fahrenheit 451 by Ray Bradbury
• 1984 by George Orwell
• The Age of Innocence by Edith Wharton
• The Count of Monte Cristo by Alexandre Dumas
• Stranger in a Strange Land by Robert A. Heinlein 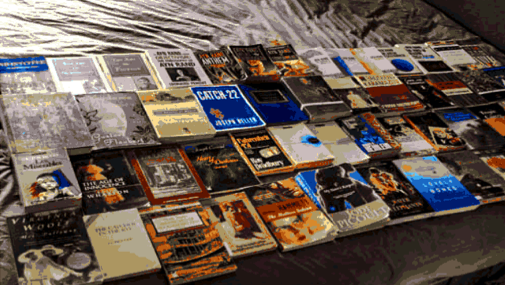