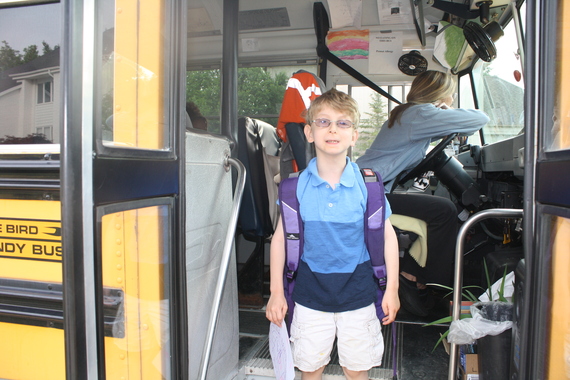 In 45 minutes the school bus will make a quick stop at the end of the driveway and deposit a handful of overjoyed children in my front yard. In just 45 minutes, summer vacation officially begins.

Unofficially, our break started last night. The kids began the evening playing in the sprinklers. My son Evan wore his goggles and carried an umbrella. Because he has autism there are many things he has a hard time with and getting water in his face is just one of those things.

We got ice cream from the ice-cream truck. Evan is allergic to dairy allergy so he ate a coconut milk ice cream sandwich from the freezer. Then he cried because he wanted something from the ice cream man too. We played basketball and flew a remote control helicopter until it got so dark we could hardly see it. At that point we remembered it was technically still a school night.

Wow, don't we sound like the perfect family? I'm sure there was bickering and moments of kids not listening but, really, it was a very nice evening.

This time of year it feels great to be able to walk barefoot in the grass again and we are excited to make s'mores in the fire pit. With a season of outdoor concerts, pools, beaches, bike rides and BBQs to enjoy, summer should be carefree. But it's not.

I have a love/hate relationship with this time of year but not for the same reasons other parents dread June through August. Summer is rough because autism can sap the fun out of it.

Although Evan is ridiculously excited that school is done; without a routine, things get rough and meltdowns come more frequently. The worst part is the lack of predictability surrounding so many summer occurrences. This makes the season very hard for Evan to navigate. Lawnmowers, thunderstorms and fireworks conspire and create a continuous symphony of unwanted music.

At least 20 times a day Evan asks if it's going to "funder" (still working on the th sound). At least when it's raining Evan is not worried about fireworks. Both are unpredictable. Both are loud and unfortunately both are now all too common- particularly at nighttime. It breaks my heart to see Evan fall asleep with his fingers shoved deep into his ears.

Yet another challenge is the daily sunblocking (did I just create a new verb?). It's a sensory nightmare because Evan hates having lotion slathered all over his skinny arms, legs, chest and back. Over the years he has learned to tolerate it because he knows that without sunscreen he cannot swim or play outside and that is very motivating to him (unless he is worried about hearing a siren. He hates those too).

Another summer dilemma stems from the fact that the days are so much longer. Bedtime comes later than during the school year but it's still hard for my 9-year-old son to grasp why he's supposed to go to sleep when there is still daylight.

I know that in the coming weeks I will be reminded of the other reasons that summer can suck. Right now I have less than two minutes before the first bus comes and deposits a soon-to-be third grader at my door step. She will be followed by an almost middle schooler and finally Evan's bus will bring home a soon-to-be fourth grader.

With just two minutes to go before summer is official, I say bring in on - just please, someone, send Evan some earplugs.

More:
ParentsAutismParenting summer vacation
Newsletter Sign Up
Raise the kind of person you'd like to know
Subscribe to our parenting newsletter.
Successfully Subscribed!
Realness delivered to your inbox