Even in a world of conspicuously young tech CEOs, Nick D'Aloisio stands out. On Thursday, the “Internet’s boy genius,” as GigaOM’s Om Malik dubbed him, launched the second, totally revamped version of his news summarization app, Summly. It was also his 17th birthday.

“I just think it’s irrelevant. I don’t understand,” D'Aloisio said of his age in a sit-down interview with The Huffington Post, wearing green pants and multicolored socks that belied the over $1 million in total funding he has received for Summly from the likes of actor Ashton Kutcher and Zynga CEO Mark Pincus. “The only way I see my age coming into this is that I’ve built this for my age, my demographic.”

Point taken. Focus on his iOS app we will: While studying for a history exam, the then-15-year-old D'Aloisio found the process of logging keywords into Google or Bing and skimming search results inefficient. “Why not take the search results and form a synopsis of the content, because what I ended up doing was clicking on a result and going back, clicking on a result and going back,” he said.

So the code-savvy teen developed Trimit, an app that summarized articles into 140-character tweets. The app got the attention of Hong Kong billionaire Li Ka Shing, who invested $300,000 into Nick’s idea, which was ultimately refined in Summly. The Summly app first launched in December 2011.

Summly aimed to solve a rather large problem: the less-than-ideal way people read news articles on smartphones. As news organizations find their feet with Internet publishing, many have strained to adapt content developed for computer screens to mobile devices.

“What we believed is news on the iPhone-sized screen is currently broken,” D'Aloisio said. “So people are just skim-reading the headlines and no one is actually standing in line or on the phone and going, 'I want to read this whole story,' scrolling through a 1,500-word article.”

The first version of Summly, which had 200,000 downloads, was more of a "demo" than a mass market app, which Summly 2.0 aims to be, D'Aloisio said.

The new Summly was created with two key advantages over the usual way people read news on the iPhone, which is in a web browser. First, Summly, like the name suggests, summarizes the news (using D'Aloisio’s painstakingly created algorithm) into a piece of text custom-sized for an iPhone. This means a Summly summary on an iPhone 5, with a larger screen, is longer than a summary on older models. The original Summly condensed articles into bullet-points; its latest iteration summarizes articles into text that has the flow of natural language. 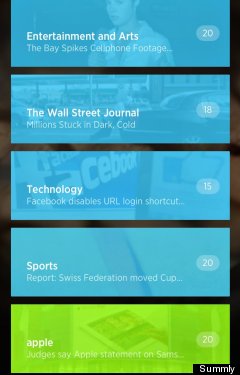 Second, and perhaps more importantly, the summaries are preloaded onto the app each time it's opened. This means no wait time to download news snippets -- unlike on mobile web browsers, they’re all there. With Summly, a user is able to access a newspaper’s worth of “articles” from dozens of publications for browsing, even without Wi-Fi.

Obvious care went into the minimalist design and functionality of the app. Summaries totaling roughly 300 characters are available under customizable topic tiles. After tapping to get to “Technology” or “U.S. News,” one swipes to get between preloaded summaries. A swipe upward takes a user to the publication’s website, a tap allows for sharing on social networks, and a double-tap takes the reader to a longer summary.

Therein lies the rub to Summly. Why go to news websites (and see their ads) if all of the most relevant information is on the app? The Summly team says it's received a warm reception from news organizations.

“I think publishers are saying, ‘Hey, we can get a lot of traffic on my sites.’” said Bart Swanson, a former general manager at Amazon who is now Summly’s chairman. “They’ve taken a viewpoint of looking at what he’s developed and the next generation.”

News Corp. was the first to jump on board, striking a deal to prominently feature The Wall Street Journal, The Times of London, and The Australian in the app in their respective countries. Summly, which aims to expand into Android and Windows phones and into languages other than English, likes the idea of micropayments, or small costs of a few cents, instead of hosting ads in order to make money. Right now, the app and its contents are free. 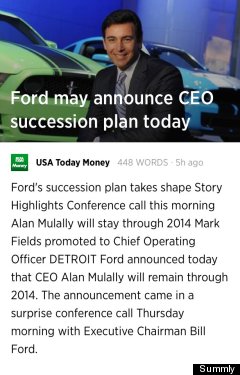 While the smoothness and colorful display of the app draw people in, it's the summaries themselves that will get them to stay. For most of them, it would be easy to mistake that they had been written by humans. For a few others (e.g. at right), syntax fails and non sequiturs will have to be tolerated.

But those are minor criticisms. Summly is smartly designed and easy to get drawn into. D'Aloisio is clearly onto something, and suddenly it’s easier to forget he’s a kid with two years left in school.

“Pfft,” D'Aloisio said, while slumping back in chair in HuffPost’s offices. He’d just taken a red-eye from London to New York before the interview and was feeling a little worn out.

“He’s a lot younger than me, he should have tons of energy,” Swanson, who had joined D'Aloisio for the interview, said.