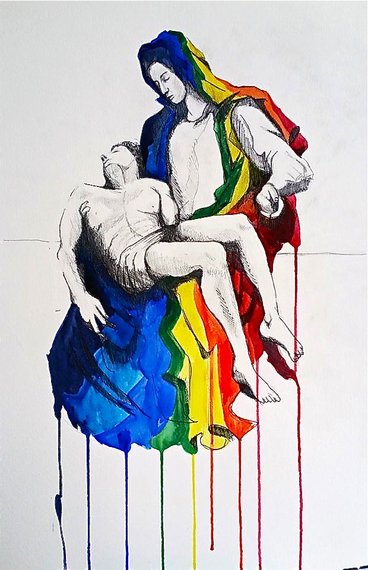 The Orlando massacre is the 179th mass shooting so far this year in the United States of America. It will not be the last. There's too much madness, too many guns, too much hate to hope otherwise. We are angry and we are sad, but then what? Gun worship seems the most powerful religion in America. From presidents to schoolchildren, the blood of countless victims stains its altars. And however much we rage and moan we feel powerless to stay the hand of sacrifice.

Each time it happens, causes are discussed, solutions proposed, and we cry, 'Never again!' The pundits wring their hands, the NRA and gun-makers pause briefly to reload, Congress turns a blind eye, and then rat-a-tat-tat! More bodies strewn across our public spaces. The cycle repeats itself endlessly.

Songwriter Dan Bern summarized the search for answers in his powerful "Kids' Prayer," written after the Springfield, Oregon school shooting in 1996:

It's all the killing day and night on television
It's all the movies where violence is as natural as breathing
It's guns and bullets as easily obtainable as candy
It's video games where you kill and begin to think it's real
It's people not having God in their lives anymore
Or it's all of it, or none of it, or some of it, in various combinations ...

As a hate crime directed against the LGBT community, Orlando adds a disturbing new dimension to the plague of gun violence. Whatever blend of madness and calculation drove the killer, he didn't invent homophobia. He just fed off of it. It is still, sadly, in plentiful supply.

Decades ago, James Baldwin, who was both gay and black, wrote about the American capacity for self-delusion as to the extent of its own sickness. Facing up to our social pathologies, whether racism, bigotry, nativism or gun violence, would endanger the national myth of innocence. Better to remain silent and pretend everything is fine.

"But if we say we have no sin, we deceive ourselves" (I John 1:8). A sin unconfessed only makes us sicker. In a 1961 conversation with Malcolm X, Baldwin said:

In a gesture of protest, a Connecticut Congressman has vowed to abstain from the "moment of silence" which seems to be the only Congressional response to mass shootings. "Our silence does not honor the victims; it mocks them," said Rep. Jim Himes.

Or in the words of Dan Bern, how many Orlandos will it take before we "summon up the sanity to scream?"