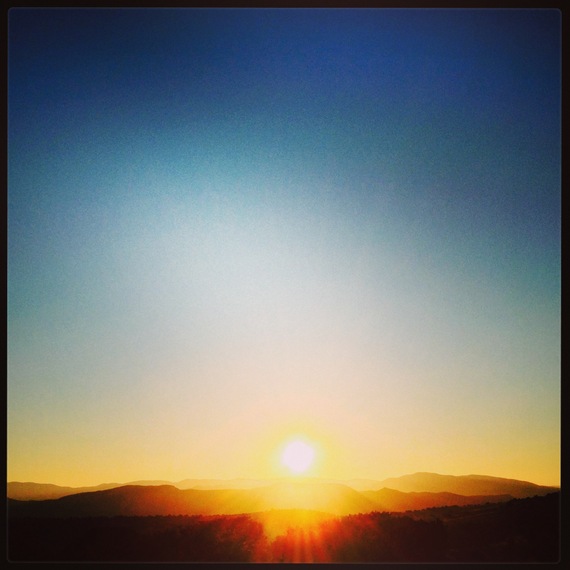 The Spiritual Light which is hidden within the sun is the most excellent light. It is shining through the hearts of all living creatures in the form of consciousness. - Yajnavalkya-Samhita in Gayatri by I.K. Taimni

Over the last decade there has been an increasing number of articles on the subject of "sun gazing" or "sun eating." Many of these articles suggest that a person can attain superhuman qualities by absorbing light through the eyes. The objective being to replace food with light while eliminating all physical ailments.

There is fascination coupled with skepticism for the person interested in such an undertaking. The notion that a human can subsist without eating is a provocative if fanciful one. The idea that a person can gain supernatural abilities by conquering disease itself is even more alluring.

In a recently released documentary titled Eat the Sun, the film's main character, a young Olympic hopeful, is intent on following a foolproof sun gazing protocol that he discovered in his search for enlightenment. The regimen: Look at the sun daily until reaching an intake period of 40 plus minutes consecutively. The goal: Conquer hunger after nine months. The film documents the protagonist's journey and his struggles, as well the demise of the guru whose sun gazing method, he claimed, could cure all illness.

Having been a so-called sun gazer all my life, trained extensively in the ancient art, I am very much aware of the physical, psychological and spiritual benefits of irradiating the self with sunlight. I am also aware of the misinformation that abounds on the subject -- much of it available via the internet -- that only serves to misguide the novice, whether in search of illumination or merely bent on improving physical health.

I am here to tell you that the sun is a powerful, sacred and living organism available to humanity for the attainment of spiritual knowledge and for the evolution of our species. Someone asked me not long ago what the purpose of solar viewing is. My answer: To expand the senses so that we can experience our true nature, which is akin to light -- existing somewhere within space and time but beyond them.

The real purpose of learning to work with sunlight, first as a stimulus of the mind/body but more importantly as the carrier of supra-physical information for spiritual benefit, is to re-vivify the self. This transforms one's own seemingly inert energetic make-up to that of a radiating star. In our schoolroom science experiments we have seen a substance change from one state of matter to another. In the case of water it can go from gas to liquid to solid yet maintain the same molecular structure. Similarly, with solar viewing, the individual can take on new states of being while retaining the human condition. The key is to attune oneself to higher levels of energy.

The technology of working with the sun is an ancient one newly rediscovered in modern times. The rush to participate in this new science speaks perhaps to the natural desire within the human being to seek light. The first thing to remember, however, when approaching sun viewing is that the body and the spirit are both in need of nourishment. Be careful not to confuse one form of food with another.

Thou Who givest sustenance to the universe,
From Whom all things proceed,
To Whom all things return,
Unveil to me the face of the true Spiritual Sun
Hidden by a disc of golden Light
That I may know the Truth...
- Gayatri

CAUTION: Viewing of the sun can be hazardous if not exercised properly. Do not attempt sun gazing without instruction. For information, contact Sean Savoy, licensed teacher in Cosolargy®, the system of restored ancient light-energy techniques for personal awakening.

NOTE: This article originally appeared as Sean Savoy's "The Light Factor" column in the December 2012 issue of the Reno Tahoe Tonight Magazine.