Nearly a decade ago, Sun Jifa lost his hands in a fishing-related explosion.

To make matters worse, he soon realized that he couldn't afford the prosthetic hands recommended by the hospital.

Instead of wallowing, though, the 51-year-old man from Guanmashan, Jilin province, northern China, just decided to build his own bionic hands.

"I survived [the fishing accident] but I had no hands and I couldn't afford to buy the false hands the hospital wanted me to have -- so I decided to make my own," he explained to the Croatian Times.

After eight years of tinkering, he says he finally developed a working model that allows him to grip, hold, and mimic other necessary movements via a system of pulleys and wires.

"I control them with movements from my elbows and I can work, love normally and feed myself just like anyone else," he told the Daily Mail.

"The only drawback is that steel is quite heavy so they're tiring to wear and get hot or cold in the extremes of summer and winter," Sun added to the Daily Mail.

According to Xinhua, an estimated 24 million people in China have limb disabilities and would benefit from rehab services and greater prosthetics development.

Check out more images of Sun Jifa's self-made limbs below:

PHOTO GALLERY
Sun Jifa Made His Own Arms After Losing Them In Fishing Accident
Download
Calling all HuffPost superfans!
Sign up for membership to become a founding member and help shape HuffPost's next chapter
Join HuffPost 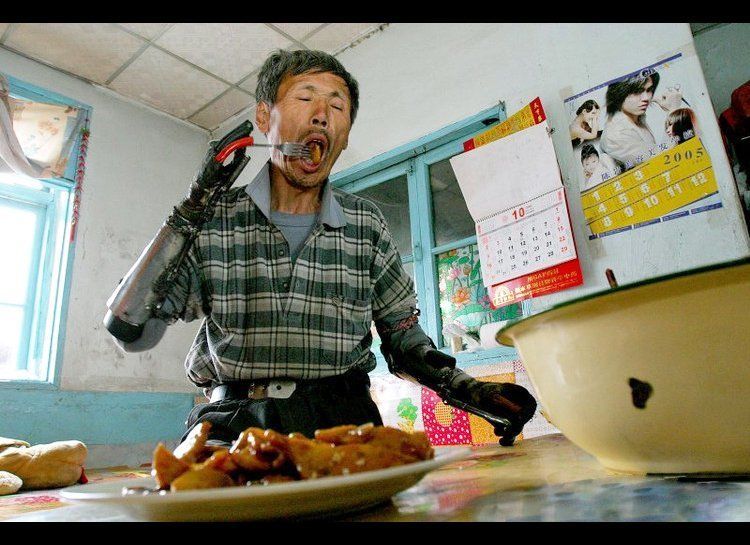