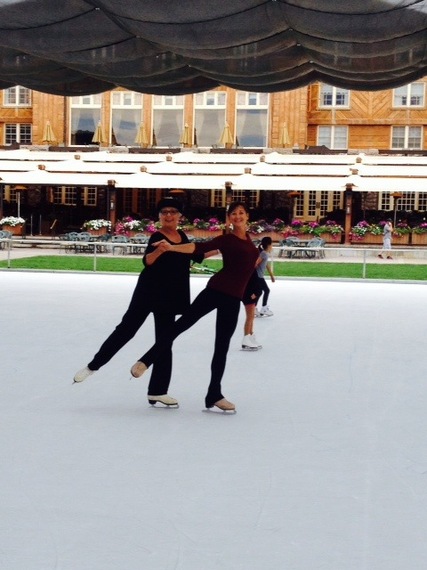 We are often wobbly.

We are sometimes breathless.

And we are gliding into old age together, having found our new tribe.

We all have a condition fondly referred to as LOSS: Late Onset Skating Syndrome.

Some of us began figure skating as children and became very good at it. Some of us even competed, or became medalists in dance, or skated in shows, but then stopped for a few decades as life took over and demanded more of our time. Some of us have fallen in love with skating and taken it up when they turned fifty or sixty years old. Alison Bers and Lee Kleinecke of Mill Valley, California, took up skating, and then ice dancing, when they retired. They've been doing it ever since, and are having the time of their lives.


We all have several things in common: We love the ice, and the swish of our blades on a fresh sheet of it; we love the music we can move to, stroking and gliding, learning to turn and working on mastering every move going backwards as well.

We meet each weekday of the summer season at 9 a.m. We are met by one of Sun Valley's glamorous professionals, most of whom also skate in the ice show, which features World, and Olympic champions every Saturday night. The pros (who fight to teach Coffee Club: they all ask for a turn) guide us through a series of challenging moves for half an hour.

Half an hour is enough, because many of us need a rest after that much concentrated effort. It's then we gather for coffee and fruit and pastries before heading back out onto the ice to practice our new moves. Once a month we go out to dinner, to catch up on our lives and laugh about aging.

And to celebrate. Because what we have discovered, besides a host of new friends from all over the country, is better posture, more energy, and something we knew we were beginning to lose, which is our balance.

One new and dedicated fan of ice skating is Billie Olson, 45, who owns Powerhouse Pub and Bike Fit Studio in Hailey, Idaho. Billy was diagnosed five years ago with early-onset Parkinson's disease. Skating star and teaching professional Stephanee Grosscup lovingly roped Billy in as a skating partner in a yearly fund-raising event called Battle of the Blades, where SunValley's ice pros seek out popular teachers, merchants, docs and nurses in Hailey and Sun Valley to learn a routine and skate in one star-spangled evening program. The whole town turns out to cheer and proceeds go to worthy causes. Billy was nervous about it but chose to try it out. When he had practiced with Stephanee every day for one to three hours a day to learn their routine, he found his musculature improving, as well as his balance.

"I kept skating as often as I could, and two years later, my doctors were floored. My muscle control is so much better. This physical activity really helps. Bicycling and ice skating seem to do the trick. They keep me moving."

Here he is with Stephanee last week, in a photo by photographer Becky Smith: 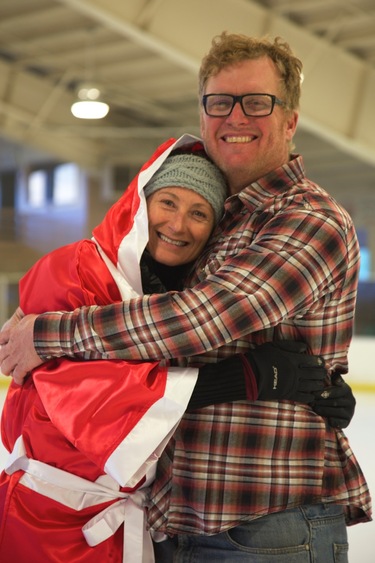 We skim straight down the rink on one foot, having a contest to see who can glide the farthest with just one beginning stroke. We practice 3-turns, mohawks, backward and forward edges, working hard not to wobble. Wobbling is our default stroke, but we don't care: we are mastering something we thought we could not do at this age. For safety, some of us wear the fashionable version of a helmet, called an Ice Halo just to feel a bit more secure, as hitting the back of our head is the last thing we need. Here are what our halos look like, and men wear them too. 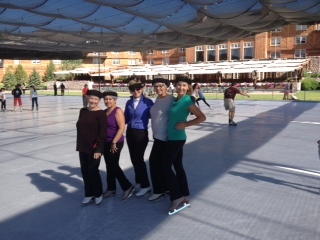 Yet we work with that fear and uncertainty, gasping at the risk, often complaining to one another ("I just hate inside threes...") but we challenge ourselves to master the moves and practice them over and over.

"I get on the ice, and start skating backwards, and my friends say, 'How do you do that?' And the answer is, I just do. It's muscle memory. I did it as a kid and my muscles remember! However, I cannot remember what I had for breakfast this morning," laughs Marilyn Alcamo, the leader of the Coffee Club, who has decorated her ice halo like a true show skater: 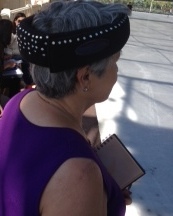 Jane Hancock says, "Exactly. I try not to miss one day."

Jane just turned 82. Here she is with super pro and past World Pairs Champion Anita Hartshorn: 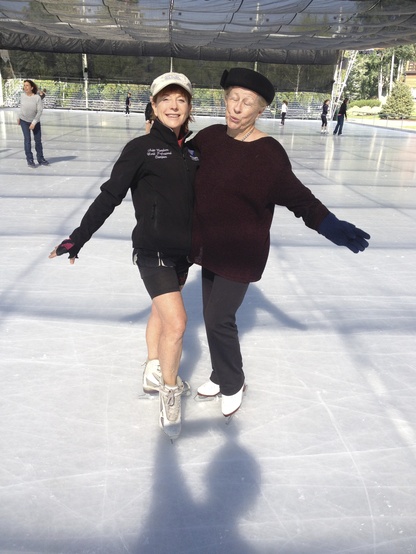 Jane's eyes are closed with sunshine in them, and pure pleasure as well.

Sure, we don't bend our knees and glide as the pros do. We push off, lean and swing, and then hurry to steady ourselves. Some of us look like real ice dancers. Others of us look like nervous storks. We try not to mention the twinges in our hinges.

We do it for all the best things in life: balance, strength, companionship.

And the most important one of all, of course: joy.