It's been a long, hot summer, and for many of us, our skin is certainly feeling the effects. Without proper protection, like sunscreen, clothing and shade, the sun's ultraviolet rays can have damaging effects on the skin -- the most immediate, perhaps, being the dreaded sunburn.

At the root of it, a sunburn is damage -- and ultimately, death -- to some of the cells of the epidermis layer of the skin. In technical terms, "ultraviolet damage causes free radical production and oxidative stress, which causes DNA damage," dermatologist Neal Schultz, M.D., host of DermTV, explains to HuffPost. This then "causes a cascade of different tiers of chemical and cellular mediators of inflammation and damage." In recognizable terms: inflammation is the redness, swelling, and sensation of discomfort (or burning) that you get with a sunburn. And the induced cell death and the concomitant inflammation are responsible for the peeling skin several days after your initial burn. 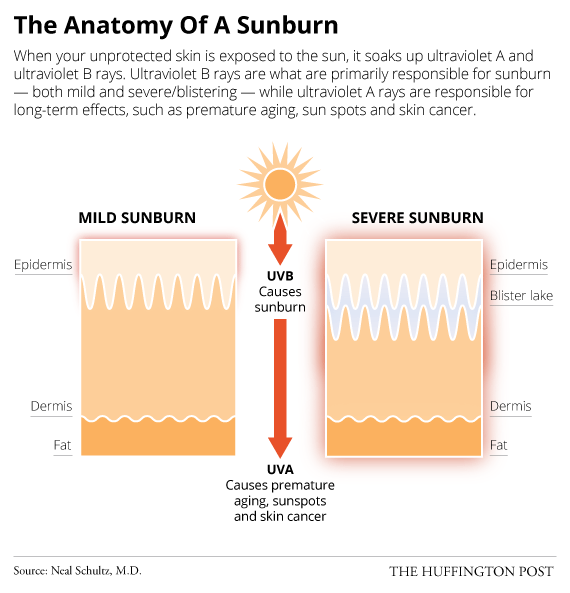 Even turning slightly pink is a sign of injury to your skin, says David McDaniel, M.D., FAAD, director of the Institute of Anti-Aging Research and co-director of the Hampton University Skin Of Color Research Institute. It's an indicator that you've reached the "minimal erythemal dose" (MED) -- the lowest dose of sun exposure needed to produce a sunburn. The MED differs from person to person.

McDaniel analogized the idea of increasing UV exposure and sunburn to a seesaw: You slowly add more and more weight to one side of the seesaw until it tips over. That tipping over is "what happens when your body's protective defense mechanisms can no longer block or neutralize the damage in the event of a sunburn," McDaniel says.

With especially bad burns, all the damage caused by sunburn also leads to engorgement of the blood vessels from the second layer of the skin, the dermis. Liquid ends up being released from this process, and that liquid needs someplace to go -- which manifests as a blister. "Because the epidermis has been damaged so badly, that liquid is able to literally cleave a lake, a space, to occupy between the epidermis and the dermis, and that's the blister formulation," Schultz explains.

Schultz recommends not tearing off a sunburn-related blister, as it will increase infection risk. Instead, he recommends cleaning your hands and a needle with alcohol, and then using only a slight amount of pressure to push the needle through the blister. Then, gently push on the blister to get the goo -- or serum -- out, before covering the blister with antibiotic ointment and a bandage.

The time it takes for a person to develop a sunburn, as well as the severity of the sunburn, depends on several factors, such as the UV index (which could be influenced by cloud cover) and altitude. People in higher climes, for instance, face risk of a worse burn because they're closer to the sun.

Skin type's susceptibility to sun damage, as well as how long a person with that skin type is exposed to the sun, also are also big factors in sunburn. Dermatologists generally use a skin classification system called the Fitzpatrick Skin Type to determine who is at highest risk for burns and skin cancer. There are six types, ranging from fair to dark -- people with Type 1 skin are extremely fair, for instance, and burn easily from the sun (and also face a high risk of skin cancer, including melanoma). People with Type 6 skin, on the other hand, are extremely dark and do not burn easily at all (though they are still at risk for skin cancer from sun exposure, as well as UVA's premature aging effects).

The timing of a burn -- how long it takes for a person to become burned after being exposed to the sun -- also depends on how much UV light you get, as well as the skin's threshold for burn. "If you put a type 1, 2 or 3 person out on a beach, at midday sun, the fairer person will exhibit signs of a burn faster," McDaniel explains. Some people's burn threshold could be triggered in just 15 minutes, while it could take longer for others.

Our bodies do have natural defenses against the sun -- the first being your skin's thickness, followed by the pigment in your skin. In fact, when you get a tan, think of it as a partial self-protective mechanism. "Your skin is trying to put up little umbrellas, whether it's freckles or a nice even tan," McDaniel explains. "If you look at the pigment, it's like a little umbrella over the DNA, trying to protect the DNA." (And yes, McDaniel says, a tan is a sign of skin injury.)

Of course, one of the best ways to protect yourself from the sun is to apply broad-spectrum sunscreen with an SPF of at least 30 -- and make sure to use enough of it and reapply if you're sweating or swimming. (For more tips on properly applying sunscreen, check out this piece here.)