By Melaina Juntti for Men's Journal

You were out on the boat all day, you forgot to reapply sunscreen and before you knew it, you scored a nasty sunburn. Or maybe you were just mowing the lawn for an hour -– maybe it was even cloudy -– and it didn't even cross your mind to put on sunscreen. Now you're scorched.

No matter how many times we're told we should use sunscreen every day, sometimes we fail. And when that happens, and your skin is blazing red, you've got to treat it. "Sunburn may seem like just a temporary situation," says Robert Friedman, M.D., a dermatologist at New York University's Langone Medical Center. "It looks bad, it hurts, it peels, but it can also cause long-lasting damage to the skin, such as wrinkles or even skin cancer."

That's because sunburn directly damages the DNA of skin cells, says Whitney Bowe, M.D., a dermatologist in New York City. "Although prevention is best, if you quickly treat a sunburn, you might have a shot at minimizing the damage done to the cells," Bowe says. "You want to help the skin repair itself as quickly as possible." Here's what to do.

Get Out Of The Sun
This sounds like a no-brainer, but it's crucial –- and something people too often don't do. "As soon as a sunburn becomes evident, get out of the sun," says Bowe. Some damage has already been done, and you don't want to harm your skin any more. That means moving the backyard BBQ inside, calling it a day in the garden or popping up the umbrella at your patio table. "Stay out of the sun until the burn fades," says Friedman. 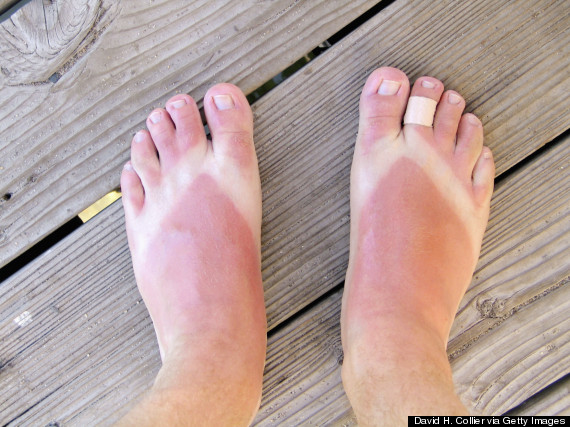 Most sunburns aren't severe enough to send you to the ER. Even if a couple of small blisters pop up, it's usually safe to treat the burn at home. "But if you develop blisters on more than 20 percent of your body, seek medical attention immediately," says Bowe. You should also head to the hospital if you feel nauseous, get intense chills or run a fever.

Take A Pain Reliever
For sunburns that you can treat on your own, over-the-counter painkillers can take the edge off. If the burn's not so bad –- mainly your skin just feels a little tender -– Friedman suggests popping an ibuprofen (Advil), which acts as an anti-inflammatory to reduce swelling and ease pain. If you also have a headache or mild chills, go with acetaminophen (Tylenol), he says.

Take A Cool Bath
It's also important to cool the skin down, says Friedman, but skip the shower -– the continual blast of water on your scorched skin will not feel good. "I suggest taking a bath to cool down the skin gently," Friedman says. Also skip the soap, which will dry skin out even more. Instead, add a few scoops of baking soda to your bath. It's cooling and helps your skin retain moisture.

Use Aloe
If you're away from home and can't catch a bath, blot your burned body with a cold compress to draw out the heat. Or smear on aloe vera. "Aloe is a cooling agent and an anti-inflammatory," Friedman says. Get the oozy juice straight from an aloe plant if you have one, or else use a store-bought gel.

Avoid Benzocaine And Lidocaine
When you got sunburned as a kid, your mom might have broken out the big aerosol can of Solarcaine and sprayed you down. We're guessing it hurt like hell. That's because it contains lidocaine, a local anesthetic that at first stings the skin, then numbs it with the end goal of cooling it down. It tends to work, but Bowe cautions against using sprays, lotions and creams with lidocaine or benzocaine (a similar chemical) because they can cause irritation and allergic reactions.

Use Lots Of Lotion
After your bath or compress cool-down, slather on lotion. But if you have any small blisters, leave those spots alone, Friedman warns. "When choosing a lotion, reach for something that is both moisturizing and hydrating so that it helps trap moisture in the skin," Bowe says. "Look for ingredients like ceramides, glycerin or soy. I also like lotions that contain oatmeal, which is particularly soothing. Some fancier creams contain antioxidants like vitamins C and E, which can also help tame inflammation in the skin. But avoid creams with petroleum, because those will trap heat in your skin." Friedman adds that dabbing on small amounts of 0.5 percent or 1 percent hydrocortisone cream, sold over the counter, for a day or two can relieve some discomfort. 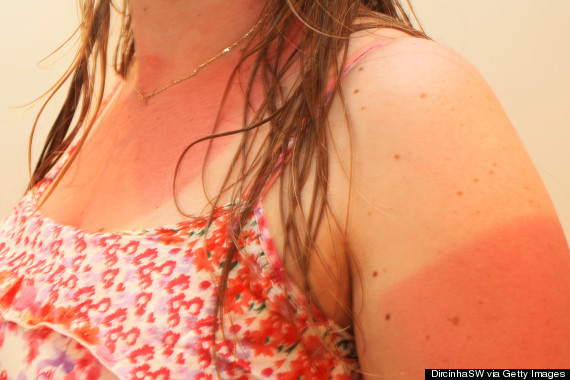 "Bad sunburns cause a process called vasodilation, where your blood vessels dilate and you lose water from your skin very quickly," says Bowe. "This can lead to dehydration, fatigue and even heat stroke if not treated." Start sipping water immediately and keep drinking it to be sure you stay hydrated. "Coconut water or other waters with added electrolytes can be even more effective at preventing dehydration," Bowe adds.

Don't Get Burned Twice
Don't let yourself forget how much sunburn sucks. Use your current misery as motivation to get in the habit of applying broad-spectrum sunblock every day, especially through the rest of the summer. Look for one that is SPF 30 to 50, guards against both burn-causing UVB rays and wrinkle- and cancer-causing UVA rays and is water-resistant so it'll stay put when you sweat or swim. Mineral-based blocks with zinc oxide or titanium dioxide tend to work best. Apply 15 minutes before heading outside, and reapply every two hours.

More from Men's Journal:
The New Rules of Sunscreen
The 6 Best Full-Body Sunscreens to Buy
The Health Benefits of Sunshine