Rebellion takes on a task almost as impossible as Irish nationalists trying to throw the British out of their country in 1916.

A five-part, three-night Irish series that premieres Sunday at 9 p.m. ET on Sundance, Rebellion tries to tell the incredibly complex story of the Easter 1916 Rising. 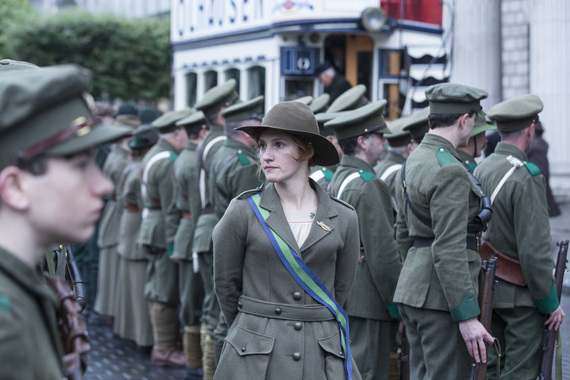 In real life, the Rising was crushed by the British in a few days, though as with almost everything in Irish history, no Twitter-length summation could tell the whole story.

Rebellion tries to convey the spirit and essence of the Rising, through the lives of several dozen characters on its many sides.

That approach makes for better drama than a straight documentary, though the series came under fire when it was shown in Ireland earlier this year for taking historical liberties as well as shortcuts.

RTE, the Irish filmmakers, were doubtless expecting criticism even after creating the most expensive production in Irish public broadcasting history, with an estimated budget of six million euros.

A hundred years after the Easter Rising, Ireland remains internally torn by the legacy of British rule. The interconnected religious divisions are critical as well, but Rebellion focuses more on the political antagonism generated by what Irish nationalists had long seen as an occupying and oppressive British government and military.

One opening scene in particular sets the symbolic tone. In 1914, two years before the Rising, a group of friends gathers to celebrate the song-and-dance stage success of three bright-eyed young women who perform as The Three Graces.

After a few increasingly short glowing speeches, one wealthy patron begins singing "God Save the King." As the camera pans the room, we see the hearty accompaniment of some guests juxtaposed against the stony silence of others.

The three women become central characters, which in itself gives Rebellion a different tone, because stories like this are so routinely recounted through the men. 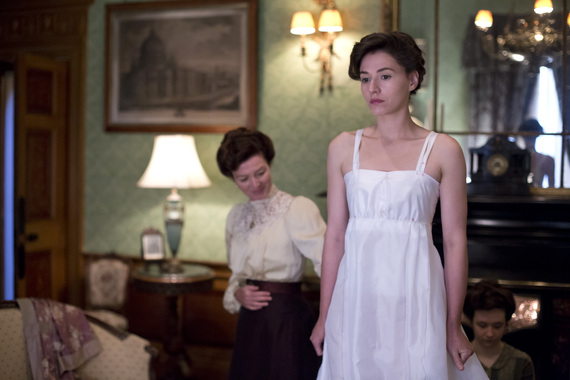 Elizabeth Butler (Charlie Murphy) (above) comes from a wealthy family that, in accordance with tradition, thinks it can promise her in marriage to the "right" man. That would be Stephen Lyons (Paul Reid), a British soldier who would secure the family's alliances with the ruling side.

Elizabeth's own view is less traditional. She is enrolled in medical school, despite her mother's admonition that the only way a woman can better her station in life is through marriage.

More significantly, Elizabeth has secretly joined the rebel battalion led by Countess Constance Markievicz (Camille O'Sullivan), which commits her to an active role in the Rising.

Needless to say, this isn't the wedding dowry her family or husband were expecting. 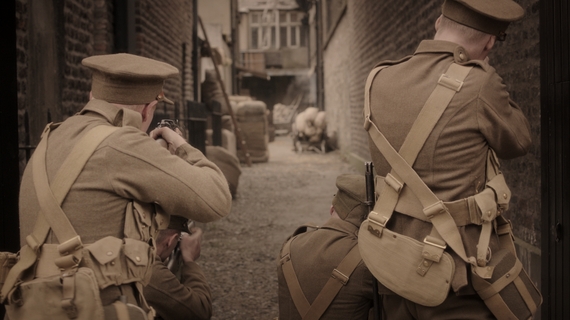 Nor did Arthur Mahon (Barry Ward), when he enlisted in the British Army to fight the Germans , expect to instead find himself facing off against his brother Jimmy (Brian Gleeson), an Irish rebel.

Actual historical figures weave in and out of Rebellion, including Countess Markievicz and Patrick Pearse (Marcus Lamb), a leader of the Rising.

To the credit of writer Colin Teevan and Finnish director Aku Louhimies, the real-life figures are presented as the other characters would have seen them - as authoritative leaders who were not without their human quirks and flaws.

Rebellion portrays the ruling Brits mostly the way Irish nationalists saw them, as arrogant and often brutally indifferent to their subjects.

The series also captures the near-blind optimism of the rebels, who were convinced they would have the popular support to hold off the British army at the same time their own internal chaos reduced that optimism to myopia.

On the other side, Rebellion periodically lapses into melodrama. 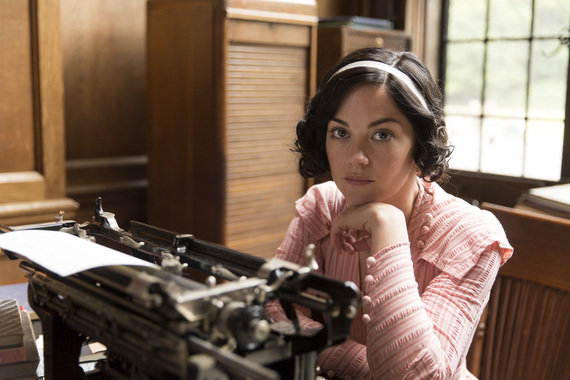 One of the women, May (Sarah Greene) (above), starts an affair with her boss, prominent British official Charles Hammond (Tom Turner).

When his wife shows up at the office and it's clear he has no intention of leaving Mrs. Hammond for the girl who types his memos, May pilfers a document that proves pivotal to plans for the Rising - even though May herself has little sympathy for the cause.

In a show that features strong women, relying on a spurned woman for this critical turn feels soapy.

That said, Rebellion illuminates an historical period and an event about which most Americans know little, so on this side of the pond we're apt to be less sensitive about smaller nuances and more attuned to the overall picture.

Rebellion has a strong kinship to Mercy Street, the U.S. PBS drama about a hospital during the American Civil War. In both shows, a lethal and highly emotional conflict has divided family and friends, and now they must recalibrate their lives according to their consciences and their perceived duties.

Rebellion has a strong and large ensemble cast as well as a rich visual palate.

If it's not a perfect history lesson, or a perfect drama, it leaves us with a better understanding of why, after the Rising, the poet William Butler Yeats wrote, "A terrible beauty is born."