Another day, another calamity wrought by the fossil fuels industry. The latest? Over 75,000 gallons of oil spilled out of a downed tanker and into the Sundarban Delta straddling Bangladesh and India. A UNESCO-protected world heritage site, the Sundarbans are the world's largest tidal mangrove forest, and, as home to hundreds of endangered Bengal tigers and riverine Irrawaddy and Ganges dolphins, it is one of the most bio-diverse places on Earth.

Transporting tens of thousands of gallons of oil through one of the most fragile and magnificent ecosystems on Earth -- what could go wrong?

It seems that no one at the Padma Oil Company bothered to ask. In the absence of any concerted government clean-up effort, the post-atrocity game plan, so far, has desperate, unprotected, and ill-equipped villagers sponging, spooning, and netting oil out of the water. That they are more or less fishing for oil carries a bitter irony when you consider that these same villagers are forbidden from fishing in the Sundarbans, while enormous commercial oil tankers are given free passage. The POC is offering to buy the oil back -- do I smell a new cottage industry? 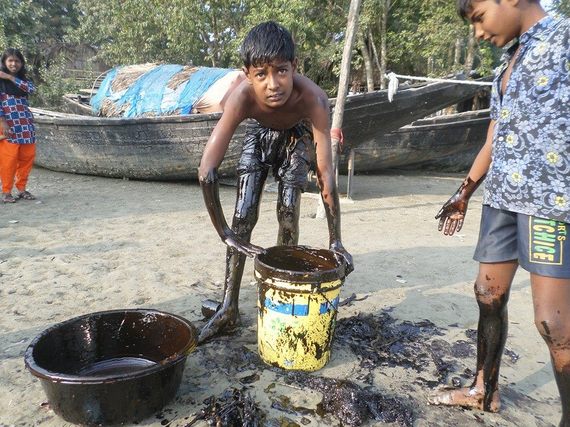 Fortunately, environmentalists in Bangladesh have been vocal in their response to the oil spill. They are calling on the government to effectively coordinate the relevant ministries to identify the affected areas, and then to clean away layers of oil in the water, on the banks of the Shela river, and from the mangrove roots which are being suffocated.

They are further demanding that the government provide local communities the proper tools and protective gear to assist in the cleanup effort, and that it assess, treat, and compensate these communities for the health risks and damage to livelihoods caused by the spill. Advocates are calling for an immediate and permanent ban on all commercial trade routes through the waterways of the Sundarbans, and UNESCO has even warned of possibly revoking the heritage status.

Of course this only represents one phase of the cleanup. Holding the responsible parties accountable is absolutely necessary in ensuring that these sorts of catastrophes don't happen again.

As such, activists are hoping that the Sundarbans oil spill will serve as a wake up call against the proposed Rampal Power Plant. For even as the poisonous oil spreads throughout the arterial system of rivers, tributaries, and canals of the Sundarbans, plans remain underway for the creation of the coal-fueled power plant. Located adjacent to the treasured mangrove forests, the 1320-megawatt power plant will require 4.72 million tons of coal per year, which in turn will require around 60 ships, each carrying 80,000-tons of coal. The proposed route for transporting this coal from the ports to the plant cuts right through the Sundarbans. Even without the kind of catastrophic shipwrecks we saw, these coal-carriers travel uncovered, releasing harmful toxins in the form of coal dust, sulfur, and other dangerous chemicals. The plant itself is even worse, releasing toxic gases like carbon monoxide and sulfur dioxide into the surrounding areas (aka the Sundarbans).

The stark inability of the Bangladeshi government to handle the current crisis bodes terribly for the even-higher stakes catastrophes that could result from the construction of the Rampal Power Plant. As such, activists both local and international are now coordinating their efforts to stop construction of the plant. Allowing these plans to go through would represent yet another victory of profit over humanity, and an increasing disregard not only for the biodiversity of the Sundarbans, but for life itself.

Those who want to help protect the Sundarbans can start by creating awareness of what is happening on the ground and spreading the good word through 350.org and Avaaz petitions against the Rampal Power Plant. 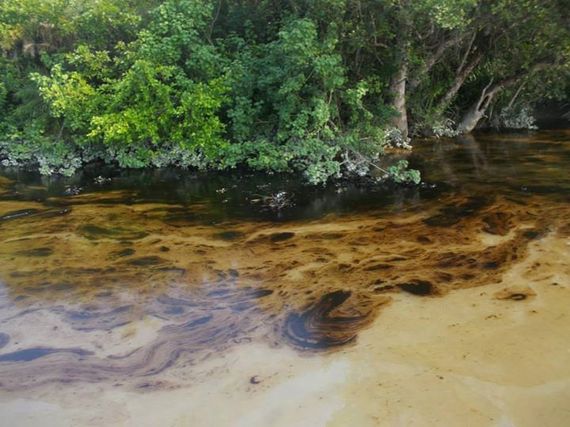