Sunday of the "Week of Eating In." I am squeaking in under the wire with this entry. All week I have been thinking about what I, a penny-pinching freelancer who likes to cook and for whom eating in (and no take-out) is the default setting, would write about. On a week that brought a New York Times feature on robots that can cook ramen, I thought about writing in praise of small, low-tech kitchens -- mine. I thought about commenting on the litany of bulletins that arrive daily in my inbox announcing the FDA's latest food recalls. This week's included pecans, salami, cheese, and granola bars tainted with salmonella -- reinforcing my extension of Michael Pollan's exhortation to eschew food with ingredients your grandmother wouldn't recognize: avoid anything cooked in a factory.

It's about 52º in my corner of Portland, Oregon. Scattered clouds. Camellias, daffodils, snow drops and violets in my yard are up, along with crocus, and bluebell buds. This morning, between sips of coffee, I planted new mint, oregano, and parsley plants, and put some primroses in the back deck boxes. To replace a defunct rhododendron I planted a small red osier dogwood and on the hot sunny side of the house, a canadice grape vine that promises prolific fruit suitable for jams and jelly. (I'm a big fan of making preserves -- small batches, small jars.) Then I went inside and mixed up the dough for tonight's chard and cheese tart.

Cut shortening into flour until mixture is crumbly, about the texture of very coarse cornmeal. Then drizzle in very cold water and mix -- I like to use well washed hands -- until dough just comes together. The faster you do this and less you handle the dough, the lighter it will be. Since I'm not making a decorative pie crust, I'll simply press the dough into the baking pan by hand, making sure it's even and not too thick. I first saw this done by a friend of my parents when I was about 10. She was a painter who'd been a Vogue model and made this seem glamorous.

The recipes I'm looking at in the Greens cookbook call for onion. I don't have one but I've found a few mushrooms and a couple of little sunburst squash from a few days ago, so I think I'll saute them with some garlic in olive oil before wilting the chard in a big cast iron skillet. Low light, big lid; don't overcook.

Three or four eggs beaten, mix in 1-1.5 cups milk. Then break some goat cheese into small but not tiny chunks -- (I'll throw in some feta as well), maybe a few tablespoons of grated parmesan, some black pepper and grated nutmeg, and if I'm feeling extravagant I'll add some of the saffron threads that were a Christmas present. Pour about half the milk and cheese mixture into the pie crust (I'm using a rectangular enamel baking dish), lay in chard then pour in remaining milk mixture. I may lay a few thin slices of Swiss cheese I found in the fridge on top before I put the tart in the oven. Bake at 375ºF until a knife stuck in comes out clean; about 40-45 minutes. Top and crust should be a golden brown.

We'll have a salad -- spinach, sliced oranges, and walnuts. If I'm feeling ambitious I'll mix up a flat bread to cook while the oven's hot to go with the tomato sauce I'm making by slicing up a cup or two of cherry tomatoes and cooking them slowly in a heavy saucepan with olive oil. (Nod to Elizabeth David; bonus: no worrisome food can liners.)

Now, I'll go back to tidying up the winter bedraggled front porch pots, check on the tomato sauce and have another cup of coffee. I'm guessing there will be enough leftovers from this evening to jump-start another week of eating in. 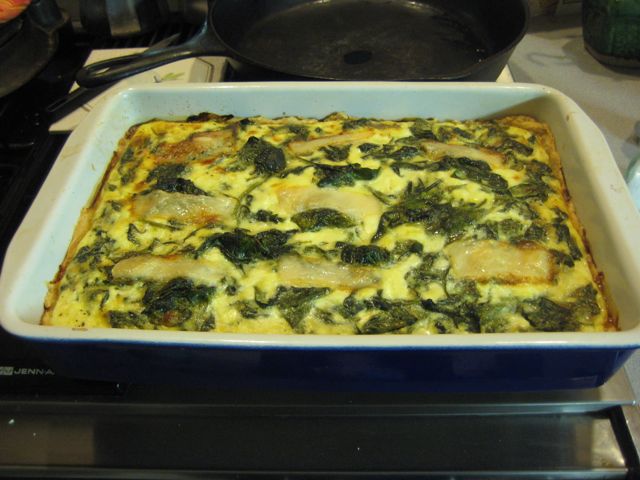