One of the authors of a controversial Sunday Times article alleging that Edward Snowden's actions endangered the lives of British spies defended the story in an interview on CNN Sunday.

The article, by Tom Harper, Richard Kerbaj and Tim Shipman, claims that Russian and Chinese authorities have gained access to encrypted documents leaked by Snowden, the former National Security Agency contractor who gained worldwide notoriety in 2013 by releasing a cache of classified NSA material. The Times story, published this past Sunday, cites multiple anonymous U.K. government sources who claim that British intelligence agents have had to withdraw from a number of countries because Russia and China were allegedly able to identify them using the documents in question.

The Times article doesn't make it clear what evidence exists, if any, to support these allegations. That's what the CNN interview was trying to pin down.

Asked by CNN's George Howell how senior British government officials know that Russia and China have indeed breached the encrypted files, Harper replied: "I don’t know the answer to that. All we know is that this is effectively the official position of the British government."

Harper went on to say that the claims in the story are "obviously allegations at the moment from our point of view and it’s really for the British government to defend it."

But the headline on the story contains none of the skepticism expressed by Harper. It reads simply: "British spies betrayed to Russians and Chinese."

During the interview on Sunday, Howell asked Harper: "So essentially you’re reporting what the government is saying, but as far as the evidence to substantiate it, you’re not really able to comment or explain that, right?" 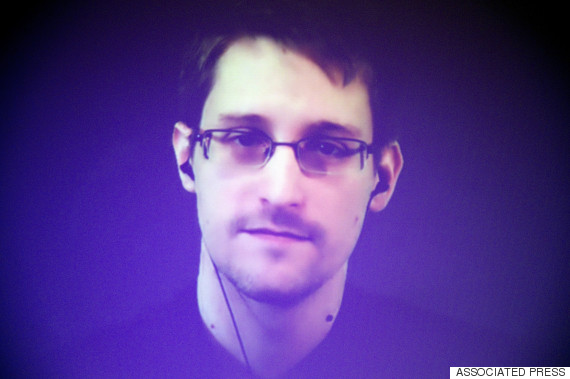 Former U.S. National Security Agency contractor Edward Snowden is seen on a giant screen during a live video conference for an interview as part of Amnesty International's annual Write for Rights campaign at the Gaite Lyrique in Paris, Dec. 10, 2014. (AP Photo/Charles Platiau, Pool)

In a statement sent to The Huffington Post, a spokesperson for the Times said the paper stands by the article.

"This story was responsible journalism and another example of The Sunday Times setting the news agenda," the statement said. "We reported what various reliable and well informed sources from within the government told us. We fully stand by our story, as did the BBC which also had it confirmed by government sources in its reporting yesterday."

Government officials using the media to anonymously attack Snowden -- without offering evidence for their claims -- is nothing new.

Michael Calderone reported for HuffPost in 2013 that Obama administration officials were anonymously claiming that Chinese and Russian authorities had likely already seized the Snowden documents.

Snowden has always maintained that, after he gave the documents to reporters in Hong Kong, he destroyed his own copies of them, according to The Intercept's Glenn Greenwald, one of the journalists who first met with Snowden when he was seeking to publicize the classified information.

As for British intelligence agents being compromised, Ryan Gallagher at The Intercept, who's worked with the Snowden archive for more than a year, wrote on his blog Sunday, "I’ve reviewed the Snowden documents and I’ve never seen anything in there naming active MI6 agents.”

The danger of letting government officials launder unsubstantiated claims through the media was on full display during the lead-up to the Iraq War. Journalists like The New York Times' Judith Miller regularly gave U.S. officials the opportunity to anonymously claim that Iraq had weapons of mass destruction, without providing any proof for those assertions.