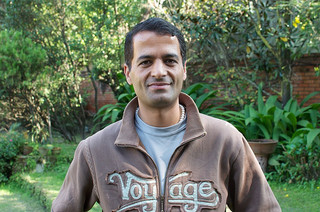 There is not one single gay bar in Nepal. Yet this small country, which ranks near the bottom of the Human Development Index, emerges as a world leader in progressive laws supporting LGBT individuals.

The man behind all of this is Sunil Pant, Founder and Director of the Blue Diamond Society, Nepal's LGBT organization.

Under Pant's leadership, the Blue Diamond Society convinced the Nepali Supreme Court in 2007 to legalize same-sex marriage and create a legal third gender for transgender people. The following year Pant was elected to Nepal's parliament as a member of the Communist Party of Nepal.

Pant continues to push the envelope. This fall Nepal will be hosting Asia's first Gay Olympics. This will be Asia's first-ever multi-sport games for the LGBT community. Additionally, last month Pant launched a campaign to request Facebook's Mark Zuckerberg to create a third-gender category on user profiles.

We met with Sunil Pant in Kathmandu as part of our mission to find the world's "Supergays":

What are you most proud of in your work?

I'm most proud of the Supreme Court decision in April 2007. The Blue Diamond Society took the government to court. I did not realize that the documentation of human rights abuses I did over the years -- the piles of photographs, medical reports, and incidents -- could be so useful to the courts. The judges studying those could not believe the level of inhumane treatment that had happened from the security forces.

While setting up a strategic plan for the case, I had some hesitation with our lawyers and activists here, because I didn't think we could demand marriage equality at this stage. Our society seemed too far from it. We also didn't want to drag into court the question of sodomy and what is natural or unnatural. I wanted to stick with very fundamental issues: freedom from torture, equal access to health, education, jobs, and end of violence. Basic safety.

The court case started building up from them. The judges asked about the problems we have. We talked about gay and lesbians being forced into marriages. So the judges ordered the government to draft a same-sex marriage law. They also asked the government to amend all the discrimination laws against LGBTI [people]. We talked about difficulties for transgender individuals. A lot of them do not have ID cards that match their gender. So then the court ordered that a third identity for transgenders be created.

So you were never expecting this outcome?

I thought there would be a positive outcome. I thought maybe we'd get 10 percent of what we were asking for. But they gave us 100 percent.

I underestimated the judiciary. They are more progressive than society, the government, and culture. It was the first time I ever appeared in the court, and I did not understand how farsighted the judges can be on human rights. Dealing with local police and the bureaucracy is hideous and slow. I thought judges were from a similar culture, but I was proven wrong.

It's very exciting. It's a historic parliament, because we are writing a new constitution. It is also larger than the past parliament we used to have. Being able to represent the LGBT [community] is extremely energizing and fulfilling.

You recently petitioned Mark Zuckerberg of Facebook to create options for users who don't identify as male or female. Tell us about what motivated you to make the request. Have you received a response?

It's about addressing the fundamental part of who we are and how we identify ourselves, which is denied for trans people. Only a few countries have started respecting trans people.

Looking at the popularity of this social media, I thought Facebook would help to educate hundreds of millions of people around the world by including the third option for trans people and others who don't identify as man or woman. But I am unpleasantly surprised to see no reaction from Facebook. This is wrong.

Nepal is soon to host Asia's first Gay Olympics. Tell us about the local reaction to this international news. What will the event be like?

The first LGBTI games in Nepal has been reported in local media, too. People in general are supportive here. We have many sports clubs. National athletes and coaches have extended their support. We are very exited.

See a video of our journey to Nepal, with clips from the interview with Sunil: