Unusually low water levels in the Stockholm harbor have led to the discovery of two sunken warships believed to be more than 400 years old.

The 17th-century vessels were found by marine archaeologist Jim Hansson while he was walking around Kastellholmen island with his girlfriend. According to his account in The Local, Hansson knew he had spotted a ship because of the pattern of wooden stumps protruding from the water's surface.

"If it had only been one or two beams sticking up, I may not have noticed it," he told The Local. "But I saw immediately that it was a shipwreck. You could clearly see the bow and the stern." 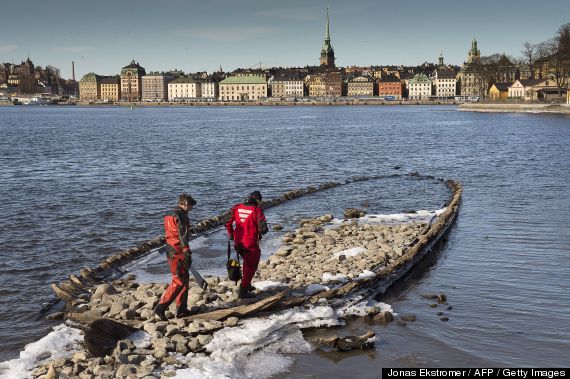 Marine archaeologists Jim Hansson and Goran Ekberg of the Sjohistoriska maritime museum investigate on March 28, 2013 a 17th century ship wreck that was discovered recently due to unusually low water in the sea penetrating central Stockholm. It might be a prize ship taken by Swedish forces during one of the numerous wars between Denmark and Sweden in the 17th century. (JONAS EKSTROMER/AFP/Getty Images)

Rumors of a hidden ship have circulated for years, but the revelation of two such vessels came as a surprise to local residents, CNN iReport notes.

Hansson, who works for Stockholm's Maritime Museum, identified the boats on his personal blog, writing that he believes one to be the Grå Ulven, or "Gray Wolf," which sunk in 1670, while the other may be the Den Stora Draken, or "The Big Dragon."

Swedish newspaper Expressen reports that scientists confirmed the identity of Grå Ulven, having known of its existence in the harbor since at least 1940. Wood samples from the second ship are being sent to the National Museum of Denmark in Copenhagen to conduct tests using dendrochronology, or tree-ring dating.

According to The Local, Sweden captured Grå Ulven from Denmark in a 1659 battle near Ebeltoft Cove, one of many maritime confrontations in a period of ongoing war between the two countries.

Measuring 30 meters long, Grå Ulven has been compared to another, more famous 17-century warship of similar size. Vasa was raised from Stockholm's harbor in 1961 and has become one of Sweden's top tourist attractions as the centerpiece of its own museum.

See the video above from YouTube user volvoew50 for first-hand footage of the newly revealed warships.