The zippy eight-minute jaunt from the Sun to Earth is the very last part of a much longer journey that started in the dense core of the Sun thousands of years ago!

You would be surprised to know that once a photon of light is produced among the nuclear reactions at the core of our Sun, it takes a very long time for it to reach the surface. Just how long is an interesting question in itself. If you Google this question or look it up in your textbooks, you are likely to get an answer that ranges from 50 million years to a few thousand years.

How is it possible that such a simple question has such a huge range of "answers"? It all depends on how you do the calculation.

Once a photon of light is born in the core of the Sun, it travels at a speed of 300,000 kilometers per second until it collides with a charged particle and is diverted in another direction. Imagine this photon bullet ricocheting off every proton that it strikes. Now we have to figure out how far from the center of the Sun this photon bullet gets after each collision. This is known as the "random walk problem," or more colloquially the "drunkard's walk problem."

The drunkard starts at a lamp post at night and staggers forward taking the same step size, but after each step he turns randomly in directions of forward, backward, left or right. How far does he get from the lamp post after the Nth step? The answer in two and three dimensions is given by the formula distance = step size x square root of N. If his step size, L, is 2 feet, it would take him 7 million steps and 3 months to travel one mile!

The estimate we just got is based on purely geometric considerations. It assumes that the protons are mathematical points in space that the photon has to hit in order to be deflected. In fact, protons have a size of about 10^-15 meters. A photon sees them as a disk with a circular area of 3x10^-30 square meters. In physics this area is called the "geometric interaction cross-section." To interact with protons, the photon has to travel a distance of about L = 1/(density x cross-section). If the average density of the Sun is 10^30 protons/meter^3, then L = 0.3 meters, so the travel time to the surface is about 200 years! Why should we reject this estimate? The Sun isn't the same density throughout, and the actual cross-sections are larger than the geometric ones and depend on photon energy! 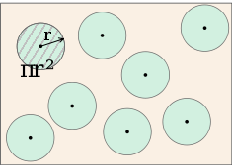 A Much Better Estimate

Stars are held up against their own weight by a balance between gravity, which tries to collapse them, and thermal pressure from the hot plasma, which tries to dissipate them. Detailed models of how this works lead to a very hot, dense core where the fusion reactions occur. This core extends about 200,000 kilometers from the center. Its average density is about 100,000 kilograms/meter^3. On top of this and extending to 500,000 kilometers from the center is the so-called radiative zone, which has an average density of 1,000 kilograms/meters^3. Finally we reach the convective zone, which reaches all the way to the surface of the Sun at 700,000 kilometers, with an average density of 1 kilogram/meter^3. 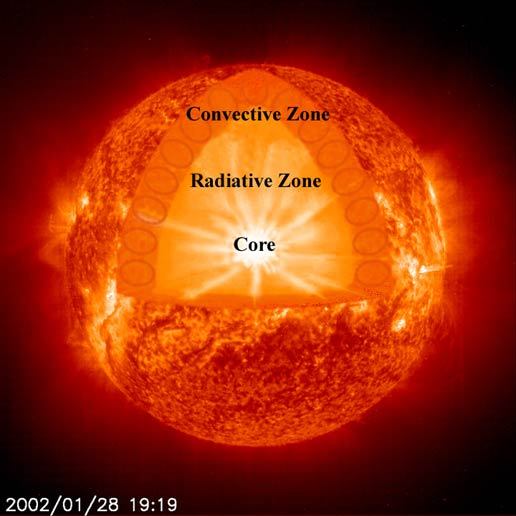 There is one other thing too. Photons do not interact with charged protons (called proton Compton scattering) as though they were only defined by their geometric cross-sectional area. To a photon, a charged proton looks huge if the photon carries a small amount of energy, and much smaller if it carries a lot of energy. When you factor in the correct physics, the average step size in the core region is about 0.0001 meters; in the radiative zone it's about 0.001 meters; and in the outer convective zone it's about 0.003 meters. The total time taken to reach the surface is about 44,000 years!

Because the density of the Sun changes from lead near the core to something a million times less dense near the surface, we have to work with a model where density continuously changes as we get farther from the core. This calculation was done by astronomer
Romas Mitalas at the University of Western Ontario in 1992 using a detailed model of the Sun's interior that also accounts for the interaction cross-section changes with photon energy. When you calculate the photon escape time with this more accurate physics-based model, you get 170,000 years!

In all these estimates we are really not following the same, single photon from the core to the surface! In fact, the original photon has divided into millions of new photons by the time its original energy reaches the surface. This makes the answer to the original question a much trickier physics problem than we can discuss here!