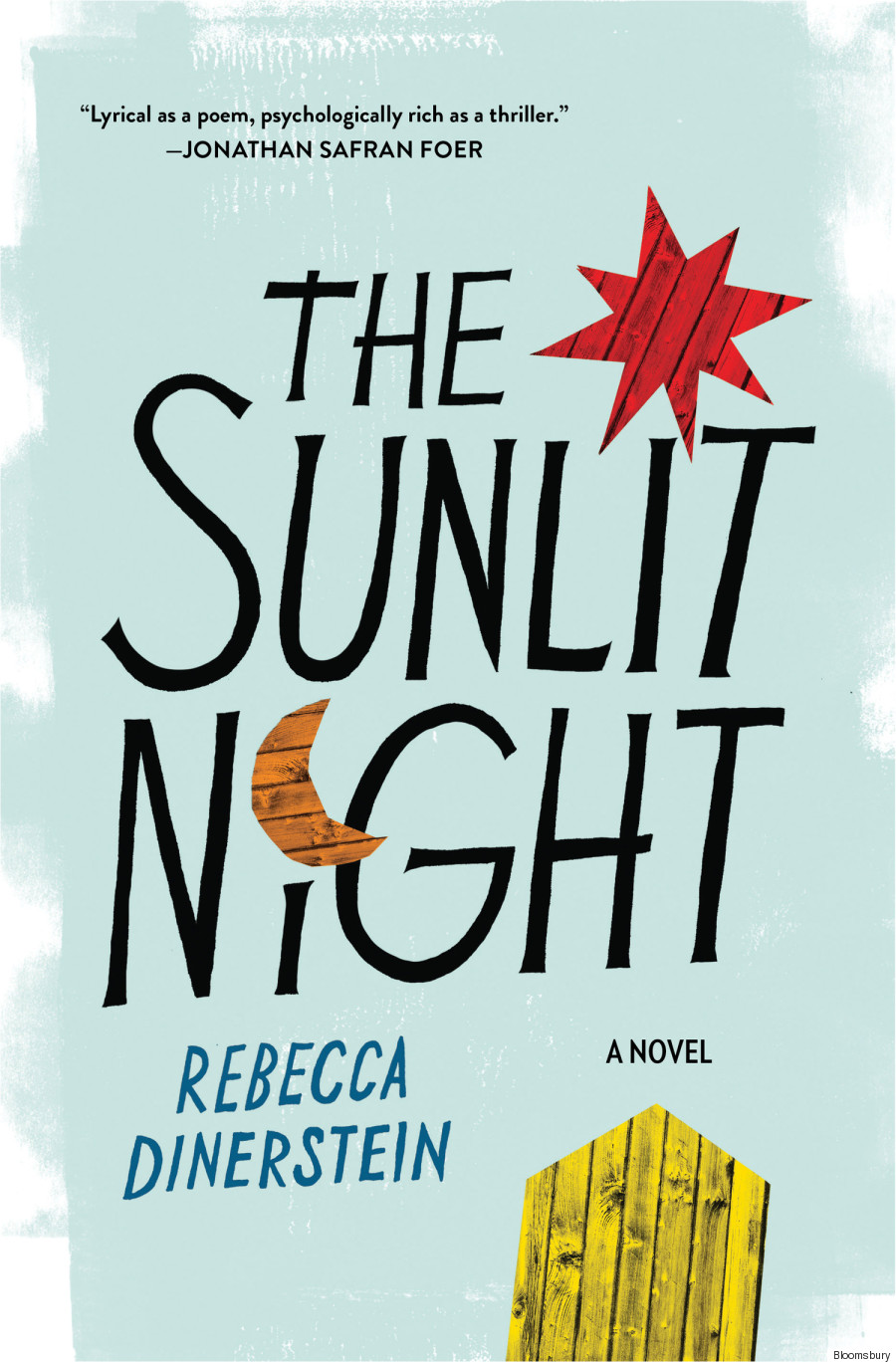 When you get far enough north, you reach a latitude at which the sun no longer sets during the summer months. (It also, incidentally, doesn’t rise during the winter, but that’s a far less romantic image.) You can look out the window in the middle of the night and find the sun resting comfortably on the horizon, imbuing the sky with a warm reddish light like a perpetual sunset.

It’s a seductive setting -- isolated, beautiful, alien -- and an inspired one for Rebecca Dinerstein’s debut novel, The Sunlit Night. Dinerstein draws two standard characters of New York City literature -- the neurotic, artsy young woman; the identity-conflicted Russian Jewish immigrant -- then implacably pushes them out of the city, all the way to a small island in the Norwegian Sea where it’s daylight for weeks on end.

Frances, shaken by a brutal breakup with the college boyfriend she’d intended to follow to Japan for the summer, takes an artist’s residency at the Viking Museum on the island. With her quarrelsome, eccentric parents on the brink of divorce, and her younger sister’s unexpected engagement stirring up even more family drama, the dream-like remove of the Far North is a welcome escape.

Yasha has lived in Brighton Beach with his father for ten years, ever since his mother sent them off to New York and then failed to follow them as promised. His father runs a bakery with his help; Yasha’s springy curls and aloof manner makes him an object of desire amongst his female high school classmates. But his father’s sudden death leaves 17-year-old Yasha with a final duty to the one person he loves: to bury him at the top of the Earth, where it’s peaceful.

While Frances spends undifferentiated hours of the sunlit day and night helping the resident artist, Nils, swathe a barn, inside and out, in shades of yellow paint for a major art installation, Yasha arrives with a motley entourage: His father, in a cheaply made casket; his coquettish, self-absorbed mother, who’s made a sudden reappearance with a new boyfriend in tow; his uncle, escorting his brother’s body.

Two lost young souls adrift on a mostly unpopulated island, Frances and Yasha move inexorably into orbit around each other. They find comfort in their shared need, their shared youthful confusion, and the unending light surrounding them. Except, of course, that the light isn’t unending. With autumn looming, the two have to decide whether to follow the sun, together or alone.

The oddball humor and pensive lyricism of Frances’s narrative, as well as Yasha’s poignant quest, feel alive and engaging, but the unlikely romance between Frances and Yasha (reminiscent of something from a Wes Anderson film) smacks a bit of fairy-tale wish-fulfillment -- or even a device to ensure the two narrative seem adequately linked together. As offbeat and quiet as their courtship is, it ultimately jars against their dreamlike, inwardly focused narratives.

It’s their individual stories, which give Dinerstein ample opportunity to explore the infinite shades of light and how subtly it governs the rhythms and textures of our lives. Both the pure light and pure darkness offer healing power in the sheer disconnect they create from the gray of the everyday, and Dinerstein evokes this powerful shift with blunt, visual language that brings the reader back to the most basic senses.

The Bottom Line: Despite its Pollyannaish moments, The Sunlit Night heralds the beginning of an intriguing career in fiction during which Dinerstein will hopefully continue to take us off the beaten path.

What other reviewers think: Publishers Weekly: "With provocative insights about the cruelty of abandonment, the concept of home, and the limits of parental and filial love, Dinerstein’s novel is a rich reading experience."

Kirkus: "Dinerstein’s writing is light and lyrical, and her descriptions of the far north are intoxicating."

Who wrote it? The Sunlit Night is Rebecca Dinerstein’s debut novel. She previously published a bilingual English-Norwegian poetry collection entitled Lofoten. She lives in Brooklyn, and researched The Sunlit Night during a fellowship in the Far North, on an island in the Norwegian Sea.

Opening lines: “In the moment after Robert Mason’s condom broke he rolled off me, propped himself on his elbow, and said, ‘What you do doesn’t help anybody.’”

Notable passage: “The world was perpetually visible, so I looked at it. Conditioned by hours in the Yellow Room, I saw the landscape in colorblock. The midnight sun came in shades of pink. The fjords rushed up onto white-sand beaches, and the sand made the water Bermuda-green. The houses were always red. They appeared in clusters, villages, wherever there lay flat land. Mountains rose steeply behind each village -- menaces and guardians. Each red house was a lighthouse, marking the boundary between one terrain and another, preventing crashes, somehow, providing solace. Nils told me, ‘There are no dangerous animals here, bare flott,’ which meant either ‘only nice ones’ or ‘only ticks.’”

Station Eleven (Emily St. John Mandel)
Amazon
Yes, we know. “Everyone says it’s so good.” That’s because it IS so good. “Station Eleven” follows the before and after of an apocalypse, inducing an epidemic. Post apocalyptic fans and non-fan alike will love this book that weaves together plot lines in a way that seems effortless. The incredible characters are heightened by the way that they fit into one another's lives.
All The Light We Cannot See (Anthony Doerr)
Goodreads
This historical fiction novel is on every book list and in every Indigo catalogue. “All The Light We Cannot See” is the stunningly written tale about a young French girl who is blind and a tech-savvy Hitler youth whose paths collide in the most unexpected of ways. Although the novel takes place in WWII, it’s the story of two complex characters rather than a Holocaust novel, as the horrific events are more of a backdrop than a centre point. This book will leave a handprint on your heart.
The Girl on the Train (Paula Hawkins)
NYCBookWorm
Initially marketed just to lovers of “Gone Girl,” look around any train/subway, and you'll see dozens of people sporting this book as a clutch. And yes, this book is as good as people say. It’s as thrilling and engaging as “Gone Girl,” complete with equally frustrating characters. But its plot line and mystery could not be more different. “The Girl on the Train” will make you anxious and uncomfortable, and you will love every moment of it.
Night Film (Marisha Pessl)
Goodreads
“Night Film” was another one of those books people were talking about before it was even released. Author Marisha Pessl’s career started with a bang when she released her debut novel “Special Topics in Calamity Physics,” giving fans high hopes for when she released”Night Film” seven years later. Readers will want to dive into the creepy world of “Night Film,” where a director's daughter has mysteriously died by suicide, thereby sending a disgraced journalist on an adventure to find the real story. Beware of reading before bed — this book is creepy in the best and most psychological way.
The Perks of Being a Wallflower (Stephen Chbosky)
Amazon
“But I've seen the movie” will never be an excuse for not reading a great book. Especially one as short as this. Stephen Chbosky’s novel about Charlie, a boy who writes to his unnamed friend about his innermost thoughts and feelings, is profound and beautiful. Charlie is one of YA fiction’s most iconic, kind-hearted protagonists yet. Pick it up and read in in maximum two sittings. Just because everyone else likes it doesn't mean you shouldn't experience it for yourself.
Vicious (V.E. Schwab)
Goodreads
Victoria Schwab’s fantasy novel “Vicious” was the name on every book blogger and vlogger’s tongue when it was released, with respected names in the community like Jesse George singing its praises. “Vicious” does not fall short. The novel about a pair of superhero best friends turned nemeses is a whirlwind, sucking you in from page one.
Gone Girl (Gillian Flynn)
Gillian-Flynn
Once a book becomes a movie, it automatically rises in star status. When this happens, there are two types of people: the people who will refuse to watch the movie to read the book, or will just watch the movie. In all honesty, read the book. It doesn’t ruin the movie. “Gone Girl’s” half diary format makes the story that much more haunting and suspenseful. Thriller lovers will want to read this, regardless how “mainstream” it is.
The Book Thief (Markus Zusack)
Pixgood
The movie adaptation of this historical fiction novel is known at a much smaller scale than “Gone Girl.” “The Book Thief's” hype comes from the books unique narrator and Markus Zusack’s stunning way with words. This Holocaust novel is so much more than just another book taking place in World War II. People have a good reason to tell you to read this.
The Fault in our Stars (John Green)
Wikipedia
Wait. You haven’t read this yet? This young adult book about two cancer patients falling in love is not only heartbreaking, it’s also beautiful. For a book based on these topics, it’s surprisingly funny and optimistic in the way these two characters grow to view life and one another. John Green’s profound one-liners have earned this book its current super-star status, and don't be turned off by its genre — after all, if "The Catcher In The Rye" was released today, it would be marketed as young adult too.
Miss Peregrine's Home for Peculiar Children (Ransom Riggs)
Amazon
Book enthusiasts were flying off the handle when this book with creepy black and white photos hit the shelves. “Miss Peregrine's Home for Peculiar Children” is strange in the best possible way. From its inventive characters to its dark themes and its creative fantastical world, this book is worthy of its hype in all facets. Although odd, this book will keep you on the edge of your chair.
Harry Potter Books 1-7 (Harry Potter)
Wikipedia
It’s a mystery why this even has to be on this list. But yes, there are people in this world who haven’t read this series and have no desire to. J.K. Rowling opened up fantasy to a generation of readers with her incredibly developed characters, a villain for the ages, and a world where witches, magicians and creatures live together. The book's vocabulary has crept into common usage (hello, Muggles!) and Hogwarts can never be over-rated. At least give these books a chance.