The sky lit up again tonight, brilliant crimson hues above reflecting on a calm river's surface to double the effect. Every night for the past week, since my mother's death seven days ago, we've been treated to one after another of some of the most amazing sunsets I've ever seen in the decade we've lived here along the shore of the Indian River. There have been storms - rain, wind, at times thunder and lightning that shakes the house and frightens the dogs - off and on during the day, and at times in the overnight hours, but without fail the evening sky has been an artist's palette of yellow, orange, fiery crimson, palest turquoise, deep purple, blue and gray.

Of the many things my mother loved - reading, playing hoss, piano music, watching small children - her unfailing love of the endless display of the beauty to be found in the heavens has been most on my mind this week. When she and my father were still able to visit us in Florida, one of her favorite activities was sitting on our back porch at sunset watching the progression of the end of day. She had a deep appreciation for even the skies others would not find so compelling - so many days out and about in the car, right up to and including the last drive we took in York a few months before she died, she would say "look at that beautiful sky!" I'd look out the window and see only overcast, angry bruised clouds scudding overhead, or unremarkable blue with a few puffy white clouds floating, a view that seemed ugly to me. But she saw beauty -- in the showy sunset, in the ordinary, in the impending storm.

I think she saw a lot of life that way as well, particularly in her later years. She spoke often of what a good life she'd had, beyond anything she could have imagined growing up, how lucky she'd been to "land" my father, how proud she was of each of her four children and all of her grandchildren and great grandchildren. She saw her life as truly blessed despite the trials and challenges she'd faced, despite the progressing failings of her body that Parkinson's wrought. As her faculties declined, she was still able to find joy in the small moments of her days. Sitting in her wheelchair on the porch at the nursing home I'd see her turn her face to the sun, close her eyes, and inhale deeply from the breeze ruffling her hair. Any small child, no matter whose, could still bring a smile, and the sight of my father, any of us kids or grandkids lit her whole face. She declared herself "ready to go home" on many occasions in the final year of her life, but she never once complained about God taking his time coming to get her, or about the circumstances in which she found herself as she waited for Him.

She herself didn't sparkle or shine like the sun; she referred to herself as an egghead and she lived her life for the most part in the wings of the stage rather than front and center. And she was happiest there, preferably with a good book. She saw herself as plain looking, although she was always beautiful to me. On the few occasions I saw her in the limelight she was clearly uncomfortable. But she took such joy in the accomplishments of all of her offspring. It was as if she made them the sunset and she was content to be the river beneath the glow, reflecting it back. She spoke freely to us and to others about her pride in what we were doing with our lives. She loved to sit and listen to Cherie or I play the piano, or Chris the organ, or Melanie sing. She loved to hear about the ripple effects of her life in the form of her grandchildren's activities. On many occasions I heard her proudly recounting one achievement or another of theirs to staff and visitors.

Her appreciation of the stormy skies reminds me now in this time of grief and loss that there is beauty and value in all circumstances, in the dark clouds of an approaching storm as much as the resting peace of a sunny day. After all, the most glorious sunsets this week have been created by clouds lingering that catch the sun's rays and create such colorful displays. The sun's path overhead is no different from one day to the next; the thing that makes each day's sky unique is the cloud pattern between us and the sun, never the same twice, sometimes peaceful and sometimes an angry tumult. As I sit here on the dock and watch the sun drop below the horizon to the west, I notice that even after it's gone, the sky is still lit up. It's a little that way for us left behind here - she is gone, but our world is still illuminated by the traces of her presence left behind. And I smile as I picture her with God right now, pulling strings as a new arrival in heaven to get Him to paint the sky for us in a final gift. 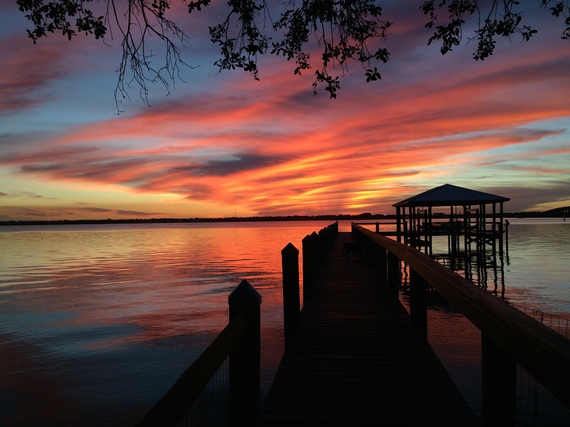