Reactions have been swift and fierce to the Thursday morning news that the nation's tenth-largest paper, the Chicago Sun-Times, was gutting its entire photography staff.

From rival paper the Chicago Tribune, to the Chicago Newspaper Guild, the Sun-Times' leadership decision to axe its award-winning photo team that included Pulitzer-winning photojournalist legends like John H. White was roundly criticized. 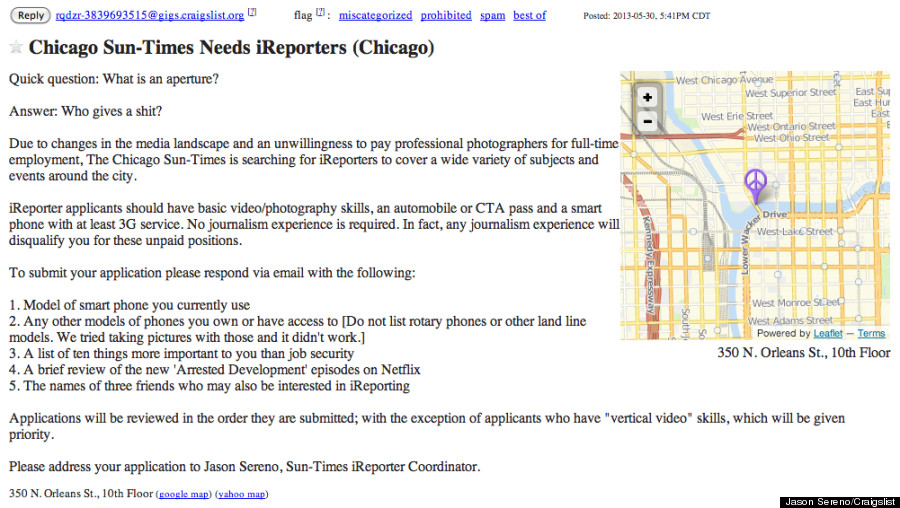 Not to be outdone, Chicago-based media production editor Ian Arsenault made a mockup of the Sun-Times front page following the announcement:

Tribune photojournalist Alex Garcia slammed the Sun-Times' move as "idiocy," noting the photographers laid off were not mere "button-pushers" but "journalists and trusted members of their communities."

"Some of them were deeply connected to areas of Chicago in ways that a freshly minted multimedia journalism graduate from New York will never be," Garcia added.

Chicago Newspaper Guild President Dave Pollard said during an interview (video, embedded) with WTTW's "Chicago Tonight" there had been "no indication" the layoffs were coming down during the union's negotiations with the Sun-Times owners, Wrapports LLC, back in August.

Scott Stewart, one of the Sun-Times photographers who was dismissed Thursday, called his former employer's decision "horrific."

The union representing the photographers plans to file a bad-faith bargaining charge with the National Labor Relations Board, according to WBEZ. In the meantime, Sun-Times reporters are being trained in "iPhone photography basics," according to Poynter.

"In the coming days and weeks, we'll be working with all editorial employees to train and outfit you as much as possible to produce the content we need," managing Sun-Times editor Craig Newman told staffers in a memo, according to media critic Robert Feder.

"You say a picture is worth a thousand words, and my Canon Snapshot [sic] they issued me — they're only going to get 350. I cannot do what [Stewart] does."