It might not have been the cleanest Super Bowl in recent memory, but we certainly were entertained to a high level.

This was not, as some have written, the greatest Super Bowl ever. It was properly hyped, then a dud, then weird, then exciting. It reeled in what had been a runaway train of ennui, and you can thank the 49ers for that. Exciting to the last snap. But the Ravens got it done.

Here’s a look at who stood out during a fascinating week in New Orleans:

Joe Flacco — I won’t belabor the point. He was great. Eighteen-million-a-year great. Of his 11 incompletions, I counted four clear drops. Flacco will be Eli Manning: He’ll frustrate us with his inconsistency, and then he’ll thrill us with his effectiveness and cold-nerved will in the most clutch of situations. In many ways, that makes him more human and interesting than the more robotic (though obviously still amazing) QBs such as Drew Brees and Tom Brady. For me, Flacco’s finest hour was the third-and-short audible. A back-shoulder fade against man defense? Risky when it’s about 10 inches to a first down and all the momentum is going the other way and the clock is not the Raven defense’s friend. But Flacco delivered a strike that helped bleed another three minutes off the clock and add three points that allowed the Ravens to take the safety at game’s end. Sure, he threw some great long passes in Super Bowl XLVII, but it was the little things that made Flacco great. None were bigger than that throw.

Anquan Boldin — ... And that catch. Boldin had two catchable balls clang off his hands in the game, but he was a monster otherwise, including on that 15-yard grab in the fourth. That was the big one then, but the TD grab to open up the scoring set the tone. Boldin was eating Chris Culliver’s lunch all game (foreshadowing) and taking advantage of man coverage. The scramble rollout-and-throw by Flacco to Boldin for 30 yards was incredible — both guys not giving up on the play, a theme that would pervade in the postseason for these Ravens. Although they punted on that drive, it flipped field position and kept the 49ers pinned in their own zone. That was another underrated element: starting field position. It hurt the 49ers early and often.

John Harbaugh — He came off as likable and serious at the same time — it can be done, Jim! — and clearly was more comfortable with Harbaugh story time all week. John handled the Ravens’ practice situation well during the week with some slightly unfavorable conditions and clearly had his team prepared for the early part of the game. They knew they had to throw to win, and pass protection was excellent most of the game. The fake field goal? I am ambivalent on it. I like the chutzpah, and they were a finished block from Ed Dickson away from getting it; the Niners clearly were caught napping. But giving up three points that point felt a little unneeded. That would have made it a two-TD game, and no Super Bowl team ever had blown more than a 10-point lead. You also could tell that Jim Harbaugh was better equipped to handle the game delay, but John stanched the bleeding when he had to and squeezed every last bit of plasma from a very tired and tattered defense. He and his staff were aggressive at every turn — including Jim Caldwell’s play-calling and Dean Pees’ well-timed zero-blitz on fourth down (we won’t talk about Jimmy Smith’s fistful of jersey) in the red zone.

Jacoby Jones — Easily could have been named MVP, although Flacco was a well-deserved choice. But Jones had the game’s two most explosive plays — the 56-yard TD catch to make it a 21-3 game and the 108-yard kick return to bump the lead to 22 points. After Beyonce’s performance, it appeared that Jones’ kick return would put a ring on it. That wasn’t quite the case, but his explosive speed was too much for the Niners to handle much of the night. Jones also was one of the few players who was happy with the power outage, as he was on the sideline throwing his guts up, he said. But the New Orleans native stepped up on the biggest stage and delivered two haymakers.

Colin Kaepernick — He’s a full-fledged star now, although clearly a media-shy one. NFL teams will spend the offseason breaking down the read-option and will try to Kaepernick-proof their defenses, but he showed in Super Bowl XLVII that he’s a rare threat to be reckoned with. Only four receivers caught passes, but Kaepernick made the most of them — an average of 18.9 yards per completion. And you could tell the Ravens seemed shocked at how fast Kaepernick (7-62-1 rushing) was, even though they clearly had practiced against speed. He has to avoid those 1-2 badly off-target throws per game, but Kaepernick no doubt is special.

Alex Smith — Smith handled himself like a consummate pro all week, answering the same four questions about his future, and the 49ers rewarded him by naming him a pre-game captain. Although he wasn’t able to go out a champion, and there could be a trade market, which might not hook him up with the team of his choosing. But Smith comes out of this week looking good, despite the negative result in the game and him not taking the field after the coin flip.

New Orleans — The power outage was bad. No question. But the city was a terrific host all week, and that should allow it to return to the regular Super Bowl rotation. Police and city officials kept great control of things, and the fans soaked up a great place that was made for big celebrations. Let’s hope the former is a non-factor and the latter is a major reason why the Super Bowl returns here, in 2018 or as soon as possible.

Chris Culliver — He helped his team reverse a 17-0 deficit in Atlanta with a big pick. But things steadily have gone downhill since. His anti-homosexual comments in the run-up to the Super Bowl were idiotic, ignorant and an unneeded distraction for his teammates. Then, Culliver went into shutdown mode when asked about them, expressing his contrition in a somewhat flaccid and repetitive manner. In the game, the Ravens targeted him time and time again and never let up. He was burned for several big catches (including two 30-yarders to Boldin) and was called for a huge third-down pass-interference call with 8:30 remaining that kept the ball in the Ravens’ hands as they barely clung to a two-point lead with a gassed defense needing salvation. Culliver was the Goat of the Game and the Dope of the Week. Quite a double billing.

Jim Harbaugh — The losing coach gets a ton of credit for leading his team back from 22 points down, and he appeared to have his club better prepared for the madness of the power outage. Harbaugh made a smart, gutsy challenge in the fourth quarter, but his team’s play-calling on the 49ers’ final drive in the red zone was mystifying. Did Harbaugh’s nervy style have his team too tightly wound as it committed penalties and turnovers en route to a 14-3 deficit? Also, it’s worth noting that his post-game complaints about missed called came off as petty. One Harbaugh came off this week — from start to finish — as the more likable and personable, and it was not Jim.

Roger Goodell — Tough week for the commimsh. He avoided getting a bad plate of etouffee — and no truth to the rumor that Greg Aiello served as his personal food taster. But Goodell had to feel like an outsider at the Super Bowl with Saints fans decrying his image, and then the power going out on the Superdome was a shocking development that made the league look bad. Did Roger kick out the plug? Of course not. But his face is on the league, and someone has to answer for the strange screw-up. Some will blame Goodell, fairly or not. I liked his sense of humor on the matter at his Friday press conference when asked about the fans’ reception to him, but Goodell can’t be thrilled — ratings or not — that the two biggest story lines coming out of XLVII were the blackout and a non-call on pass interference.

Ray Rice — Ineffective most of the night until a 12-yard run in the fourth quarter, and his fumble couldn’t have come at a worse time. He half-heartedly complained to the ref that he hadn’t caught the ball, but Rice knew he did. Reports after the game suggested that Rice was a bit too chatty and obnoxious for a player who had such a poor game and almost was pulled for Bernard Pierce (had he not been banged up briefly, he might have taken Rice’s carries), but hey, whatever, Rice won a ring.

Donte Whitner — Not a great game. He was out of position on the Boldin TD and bit hard inside on the Jones TD pass. Whitner also had a facemask called on him after letting Ed Dickson get wide open on a 14-yard catch. Although Whitner helped out in run support, he was exposed against the pass.

Aldon Smith — Where was he? The stat sheet says he had two tackles and a QB hit on Flacco, but I do not remember either. Smith’s disappearance and the lack of a pass rush elsewhere put the secondary in a bad spot. The Niners’ defense wasn’t the same since the win over the Patriots in Week 15.

Vernon Davis — Had some big grabs (6-104-0 receiving), but also two key mistakes — an illegal formation penalty on the first play of the game that was a 25-yard net loss, and a catch he probably should have hauled in from Kaepernick with 3:32 left in the game. The pass hit his hands. He could have caught it. That probably would have given the 49ers a late lead if he hangs on. The 49ers were undone by missed or flushed-down opportunities all game. 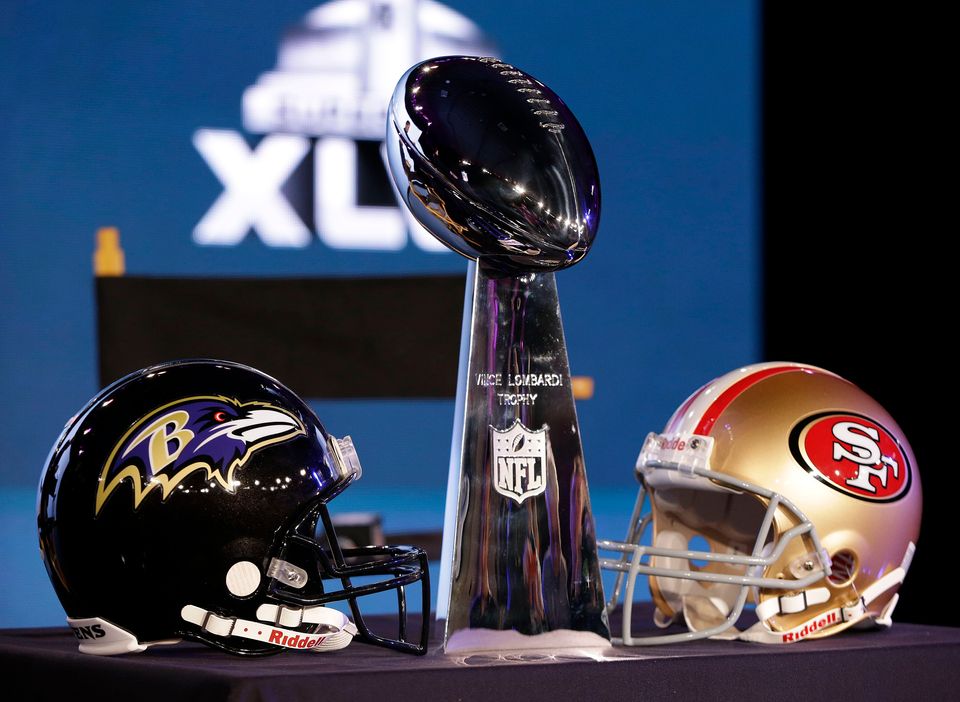