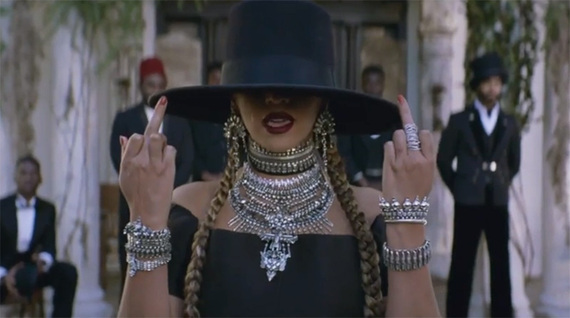 For two weeks I've been contemplating on writing my thoughts on the backlash (or for better words, black-lash) I've seen from fans that view Mr. Cam Newton as some 'thug' that uncomfortably inserts in blackness in sports media every opportunity he gets. I am not mad at him at all, so I knew if he didn't win the Super Bowl the sports racist trolls would come from behind their white sheets and call him every racist epithet they could spell correctly. Then Beyonce dropped her unexpected video with a new song entitled, "Formation" that declared her love for black aesthetics and acknowledging the police brutality that has been the cause for several protests over the past couple years while giving life to what we now know as the Black Lives Matter movement.

Cam Newton and the Panthers have had an incredible record this season and Newton has been under heavy scrutiny for 'dabbing' and being entertaining to fans. Apparently that has been rubbing more conservative fans the wrong way and they have been showing their disdain for the star quarterback for some time now. To make matters worse, other professional athletes have been weighing in on his personality too.

Twitter and Facebook (I wasn't going to check Reddit) showed some of the most vile, racist comments towards these two entertainers so much so that it ruined the entire mood of social engagement during the Super Bowl. I dared myself to search for certain words and I found such nasty and deplorable posts that I felt like I should screenshot them all and give them the platform they feel they deserve. I mean, if you're going to be a racist-bigot, be proud of it, right? 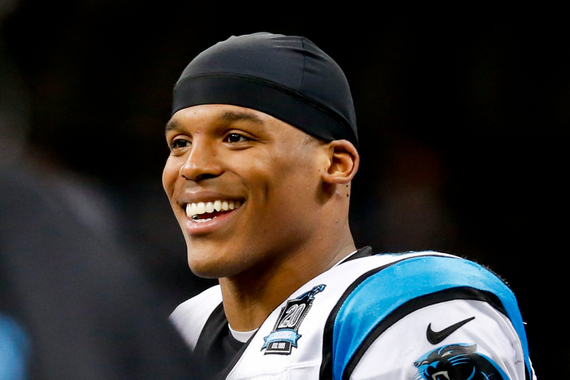 There is no secret that athletes have their share of personal issues that at times disagrees with the persona their organization may want them to have. Take for instance Ben Roethlisberger for the Pittsburgh Steelers who has been accused of sexual assault. Then there is Patick Kane of the Chicago Blackhawks who has been accused for numerous assaults. Don't forget Jonny Manziel for the Cleveland Browns who clearly exhibits behavior of an abuser and possible substance abuse, never gets called a 'thug' or unprofessional. Meanwhile, Newton is not exempt from such description. But it's okay, Newton just flashes his million-dollar smile and dabs away accordingly. 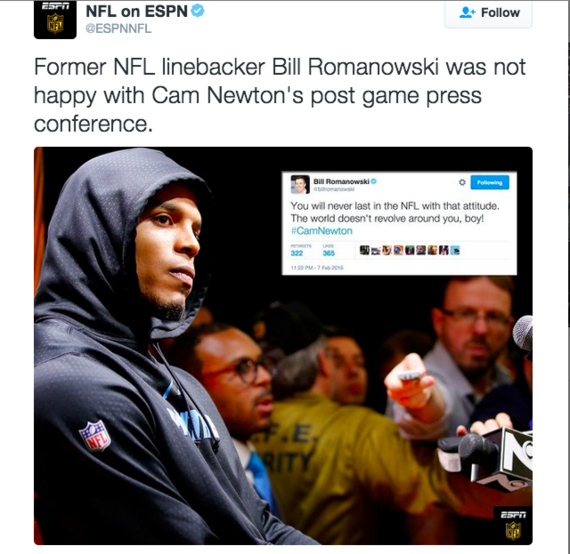 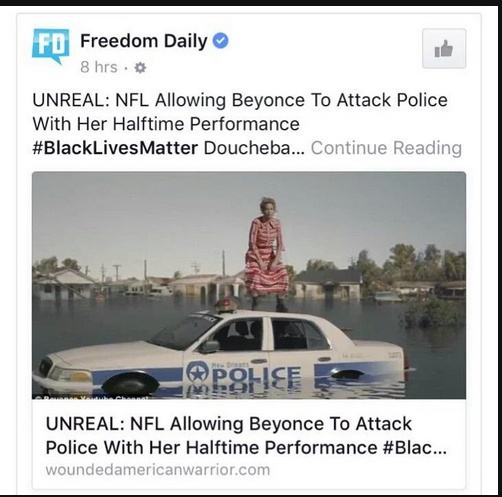 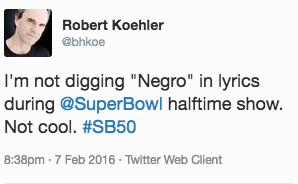 "I like my Negro nose with Jackson 5 nostrils / Earned all this money, but they never take the country out me," Beyonce proclaims on her new song that has already produced an irrelevant boycott that nobody really cares about. I'm not sure how her declaration for her own perception translates to being "Anti-Cop" but then again, we are living in a country and time where Donald Trump is a serious presidential candidate and all of his supporters are offended by any public acknowledgment that spotlights injustices caused by racism. Can you believe that? Instead of getting upset that innocent and unarmed people are being killed in the custody of officers, these simpletons are offended by the message, " Stop killing us."

Even Bill Romanowski referred to Cam Newton as a 'boy' on his Twitter feed. He gave a weak apology and deleted it. It's pretty clear that black entertainers are only good for their talent; as they are expected not to express any feelings on current events that may affect their families, friends or even themselves.

Beyonce is a different issue all together because she's being attacked on both sides. She's being attacked by white people who are offended by her sinking a cop car in a video instead of using that anger to push for better government emergency responses. They are not comfortable with Beyonce using the word 'Negro' at the Super Bowl. I even saw comments that alluded to the lack of diversity Beyonce has with her dancers. Then I noticed black people complaining that Beyonce is not black enough to make such grand statements. Pro-Blackness is not under some litmus test. How I define my blackness might not work for everyone and since black people aren't a monolith, it is only logical that pro-blackness is something unique to the individual black person. Pro-Black or pro-blackness is an action word: proactively-black. To be proactively black you must be actively acknowledging the ills and oppressions that not only affect you but others like you, that to me is what pro-blackness is. Does Beyonce have to show up to a Black Lives Matter march to solidify her blackness? No. Does she have to dye her golden tresses dark and rock a natural afro to be pro-black? Absolutely not. Beyonce is wealthy and influential enough to stick up her middle fingers and laugh at your attempts to boycott her.

Overall, I'm proud of both Beyonce and Cam Newton. I look forward to seeing Cam Newton win future Super Bowls and I look forward to seeing Beyonce evolve more as an artist. Oh, and to all the bigots that troll black media spaces to insert their "well actually" and " All Lives Matter" bullshit, please turn your computer off and go try to change life for the better good. Try changing a life of someone that doesn't look like you or have the same opportunities as you do.