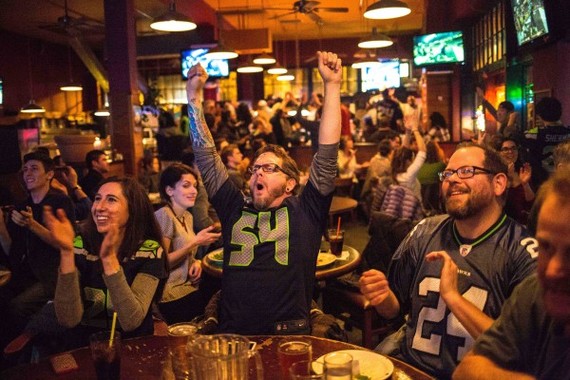 Did your home team make the Super Bowl this year? If so, congratulations!

Also, you may be more likely to get the flu.

Sorry to be the bearer of bad news, but it's actually a super interesting phenomenon!

The findings come from a study just published in the American Journal of Health Economics.

The study's title is worthy of mentioning Success Is Something to Sneeze At: Influenza Mortality in Cities that Participate in the Super Bowl

Think about it: in the weeks leading up to the final one, we are more likely to go out, meet up for a drink, or gather to eat at a bar showing the game. If we are a bit under the weather, friends or die-hard fans may coax us to show up just for a bit.

While hanging out, you high five people, pass along a drink, and dip into that bowl of chips with your hands just like everyone else!

The flu virus spreads through saliva, which can spread further than you think through coughing, sneezing or even just talking. With this knowledge, it's no wonder Super Bowl success for a city comes at a health cost.

The findings also showed that the overall flu impact "is about seven times larger when the peak of the flu season occurs closer to the Super Bowl than when it is held about three weeks or more before or after the peak."

What kind of impact?

As you may know, the flu can lead to death, especially in those with chronic conditions, the very young or elderly.

Even if you're healthy, the flu can lead to serious consequences, including death. Of course this could be avoided by everyone getting the flu shot along with these other vaccine must-haves.

Nationwide about 5.6 people per million die from the flu annually; that rate increases to about 6.6 in the Super Bowl-contending areas.

Besides mortality rates, the cost of the flu (in related doctors visits, medications and hospitalizations) are nothing to sneeze at. The annual cost of seasonal influenza to our country is about $100 billion! (Journal Vaccine)

You may be thinking that of course some NFL team regions are more prone to the flu than others, due to weather and geographical differences. It's pretty cold this time of year in Denver; right Broncos fans?
Well, the economists on the study thought of this too. They found that flu mortality was NOT higher in these areas in the years before and after the contending big game year. This rules out the region itself being the difference - and points to the Super Bowl as the difference!

Although the study focused on people over age 65, these aren't the people necessarily visiting the bar or Super Bowl party. A relative could come home from a party and transmit the virus; your friend who works at a nursing home could pass along the virus to someone at work, making a vulnerable patient sick; you could come home and bring it to your child.

So what's a proud NFL fan do to prevent being a flu statistic? The same as the losing team fans should do! Common sense should prevail:

Wash your hands frequently! If you can't get to a sink, use a hand sanitizer with alcohol.

I'm an advocate for hand sanitizer at every bar anyway - think about everything you touch before you grab that bite to eat!

Don't shake hands or high five if you don't have to. What's wrong with a good "fist pump" anyway?

If you're feeling ill, stay home - even if the party sounds too good to miss!

If your sick friend came anyway, avoid him or her like the, um....well you get the idea.

Cover your nose and mouth while coughing/sneezing. This is also a good idea if you're in a crowded bar and you're forced to talk closely with someone.

As for the Super Bowl party spread, I must add two pet peeves of mine all season round:

• Double dipping into that guacamole or artichoke dip is never a good idea, especially during flu season!

• Try to grab servings for yourself instead of using your hands to grab those nuts out of the same bowl everyone else did!

Since inebriation can lower our common sense - fellow partygoers may need reminding on these tips. Don't hesitate to remind someone to cover their mouth if they're coughing - you'll be doing them a favor too.

This is a great story because it illustrates how interwoven health and our socialization trends are. Health, economics and societal trends all affect each other and should be studied in tandem.