Just days before Sunday's pro football championship game, the broadcaster announced that it sold the last Super Bowl TV commercial at a price of $4.4- $4.5 million per 30-second spot. That represents a sharp increase from $4 million last year and looks particularly strong because the overall TV advertising climate is poor. 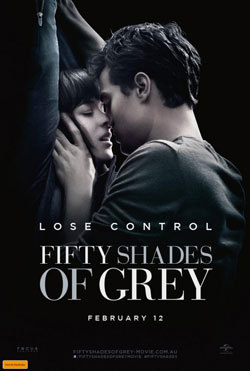 Eroticism doesn't mesh with the beer and chicken wings crowd

The other five Universal movies with commercials are Jurassic World, Minions, Furious 7, and Ted 2. That's $22.5 million in face value advertising and other commercial inventory was sucked up with spots for NBC TV programs and corporate sibling cable networks.

What's going on? I wonder if NBC made a conscious decision to prop up what is broadcasting's marquee event by giving the appearance that inventory is tight with spots from corporate siblings.

Certainly, movies get value with the Super Bowl audience usually running 110 million persons in the U.S. -- nearly one third of the population. Movies typically take 4-10 of the 60+ Super Bowl ads, but only three movie spots were from other film studios this year. Movies find the Super Bowl a simple buy because commercials just stitch together scenes from a film, so the ads are inexpensive to produce.

Keep your eye on the audience ratings for Oscars telecast, which is scheduled for Feb. 22 on ABC Television. The Academy of Motion Picture Arts and Science -- which confers the Oscars -- is nervous about weak viewer interest, because the nominees for best picture are mostly esoteric and out-of-the-mainstream independent-style films. In early January, the academy revealed it set up a $5.5 million promotion fund to stoke interest in the telecast this year, which is a first. It aims to protect its Oscar telecast money machine that brought it $97.3 million last year.

What I'm hearing is that ABC Television ad sales are brisk at $1.9 a 30-second spot. But if Oscar audience levels disappoint, the impact will be felt next year in muted advertising buys. Hence, the academy deployed the promotion fund.

The Super Bowl and the Oscars (known in TV as "the Super Bowl of women" because it draws a large female audience for its fashionable clothing and actress glamor) will always be big draws. It just seems some below-the-radar manipulation is at play to inflate perceived value.