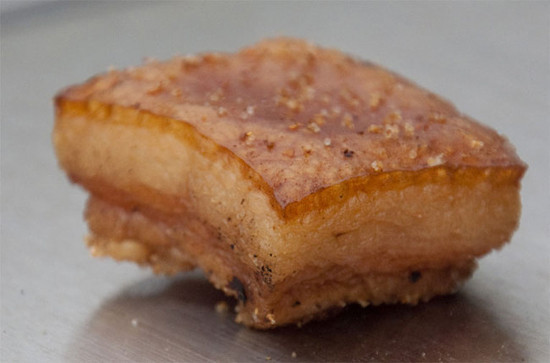 It is often said that nothing on the hog is wasted except the squeal. The bristly hairs are used for paintbrushes; the ears are used for dog treats (and people treats in some restaurants); the fat, called lard, is coveted by bakers for flaky pie crusts; pickled pigs feet are found in jars in bars and smoked trotters are used for flavoring soups; cheeks are chic in hip restaurants; intestines, called chitterlings (a.k.a. chitlins), are an acquired taste in the South, but soul food for descendants of slaves; the fatty layer streaked with muscle beneath the skin of the belly is everybody's fave, bacon; and the skins are used to make cracklins and rinds.

Cracklins are not the same as pork rinds or pork skins which are made from just the skin of the hog (see sidebar at right). Cracklins are the skin with the layer of fat beneath.

Cracklins are deeply woven in Southern culture, especially among African American and Mexican immigrants. In Puerto Rico, Mexico, and the Philippines, they're chicharrons con gasa. In New Orleans, they're called grattons. I call my radically different crispy, salty, and crunchy chunks "Gold Nuggets". No matter what you call these cousins of bacon, only chocolate is more decadent and only crack is more addictive than homemade cracklins, and there is a big difference between storebought and this recipe.

My recipe is a vast improvement over storebought or any home made cracklins recipe you'll find. It is not traditional. Just better. And here's why. They are not deep fried and they won't break your teeth. They take longer, but they are worth the wait.

My Gold Nuggets are addictive when served warm and fresh as a snack with beer, perfect for watching the game. They can also be added to beans, greens, soups, stews, eggs, or as a salad topping, mixed into cornbread batter adding a tasty crunch. Use them wherever you might add bacon. I once floated them in a cream and pumpkin soup. They. Were. Incredible.

Mark Singleton is VP of Sales & Marketing for Rudolph Foods Co., the largest producer of cracklins and rinds in the world. His company bought 120 million pounds of skin last year. They begin with hairless skin with the subcutaneous fat attached from the shoulders and hams (rump), slice them into strips, smoke them and cook them to break down the collagens and connective tissues and begin rendering the fat. They then simmer them in lard to render most of the remaining fat. They are then drained, and dried to form "pellets" ready for frying. Their ingredient labels couldn't be simpler: Pork skins and salt. No preservatives.

The results are hard and crunch loudly. Frankly, for snackin I prefer commercially made rinds to cracklins. But commercial cracklins are great for cooking. My wife smashed some and baked them into a bread. They ranged from pea sized to powder. The moisture of the dough softened the big chunks slightly and the powder made a smashing flavor throughout the loaf. I pounded them to bread crumb size and coated some fish filets with them and pan fried them. OMG.

Singleton speaks wistfully about his version of Mofongo: Cracklins and boiled plantains mashed together, formed into balls and fried. Rudolph's website has some tasty looking recipes using cracklins and they invite more.

I started with the traditional recipe: Deep fry the skins and subcutaneous fat layer in oil for about 6 to 8 minutes until they are GBD (golden brown and delicious). And doubly greasy. And the skin can get really really hard. Like shard hard. And frying them also makes a horrible mess. They can pop and spatter all over the stove and floor. I wanted to avoid the mess, tame the hardness of the skin, and add some flavor. So, of course, I took them outside.

I decided to try to tame the hardness by pouring about an inch of water and an inch of oil in a Dutch oven and placing it on the side burner of my grill. My theory was that the water would boil first and much of the fat would render out of the rind leaving softened skin and fiber until all the water boiled off and then they would fry the traditional way with the remaining oil.

Well, it almost worked. After the water boiled off after about 60 minutes at 212°F, the surface of the liquid got still as the temp rose to about 300°F and then the cubes of skin and rind started exploding. We're talking serious percussive bangs here. Pork skins flying four feet in the air followed by plumes of hot oil that burst into flame when they hit the burner. The skins bounced on my deck and drenched my grill in oil. I had to don safety glasses and my grill gloves, and when I was done, I had to powerwash the deck and fend off the dog at the same time. But the cracklins were good.

So I next took a batch and boiled them in water sans the oil, and then moved them to my gas grill at 225°F. I put wood chips on the burners to make smoke. Within an hour the skins turned a nice dark golden brown, but the fat remained gelatinous. So I cranked it to about 400°F to render more fat. Bingo. Killer cracklins. Crispy, chewy skin that was not painfully hard. Rich unctuous, juicy, crunchy, bacony fat, and slightly smoky meat.

The final step was to buy a whole sparerib section, skin on. This is the section from which a lot of bacon is made. I used my filet knife to remove the skin, fat, and left a thin layer of meat on. I set the ribs aside for another meal.

Ingredients
Pork skins with fat attached and, if possible, a little layer of meat at the bottom. You can order from a butcher or just order a raw shoulder (butt) or raw ham and specify you want it "with skin on". Do not get a cooked or spiral ham. Then cut the skin and fat layer off the meat. Leave a little meat on them if you like. I like.

About the spice mix. When I am too lazy to make my own, I love Tony Chachere's Creole Seasoning or Zatarain's New Orleans Traditional Creole Seasoning on my cracklins. A good barbecue rub like my recipe for Meathead's Memphis Dust will work fine too. Hot sauce is also popular in N'orleans.

Do this
1) Combine the spices in a bowl.

2) If there is some hair remaining on the pig skin, burn it off with a butane lighter. Do this outside. You know what burning hair smells like. Then wipe the skin clean. The skins are hard to cut, even with a sharp knife, so put the skins in the freezer for 30 to 45 minutes and they will stiffen and be easier to cut.

3) With a sharp knife, cut the skins into strips about 1" wide. Don't cut them into squares yet or they will fall through the grill grates into the fire. If you have a perforated pan or a mesh like Frogmats (at right), you can cut them into squares. Otherwise, leave them as strips.

4) In a large pot, cover the skins with water and boil for about 30 minutes with the lid on. Discard the water and rendered fat. This step renders a lot of fat and breaks down the fibers that make the skin impenetrably hard.

5) Place the now puffed up strips fat side down in a smoker or grill and smoke over indirect heat at about 225°F for an hour. Then crank the heat to 400°F to render more fat for 45 minutes or more until they are GBD, but not dark brown. If you have charcoal grill, move them over direct heat and put a pan with water between the cracklins and the flames or they will make a blazing inferno. Now you have a choice. Once again, think bacon. You can cook them until they are really crispy, or you can remove them when they are still moist and juicy. You pick. Try some both ways and decide which you like best.

6) Lay some clean newspaper the counter, cover with a layer of paper towels, and dump on the cracklins. If you've done it right, there will be little grease to absorb. While they are still warm, transfer to a bowl and sprinkle liberally with the spice mix. Let them cool for about 15 minutes and cut them into squares if you cooked them as strips. Serve.

You can store them in the refrigerator in zipper bags for a week or two. After then they tend to get rancid. To reheat them, warm at 200 to 250°F in the oven or grill. But not the microwave. They can explode! 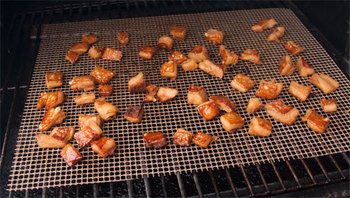 What are your favorite snacks for watching football?