In 1969, a Minnesota-born artist by the name of Fritz Scholder painted a portrait he dubbed "Indian with Beer Can." The image shows a stark figure in sunglasses and a cowboy hat, sitting with his arms crossed and teeth bared before a can of Coors. Unlike many studio paintings that came before it -- the ones that pictured Native Americans as indomitable or mystic figures detached from Whiter society -- Scholder's portrait was mundane, lower class, uncomfortable. It didn't shy away from the taboo of alcoholism in indigenous communities, nor did it cover up America's distaste for acknowledging poverty and alienation in the Indian Nation.

"Indians in America are usually poor," Scholder remarked to a newspaper a few years later, "sometimes derelicts outside the value system, living in uncomfortable surroundings. We have really been viewed as something other than human beings by the larger society. The Indian of reality is a paradox -- a monster to himself and a non-person to society." 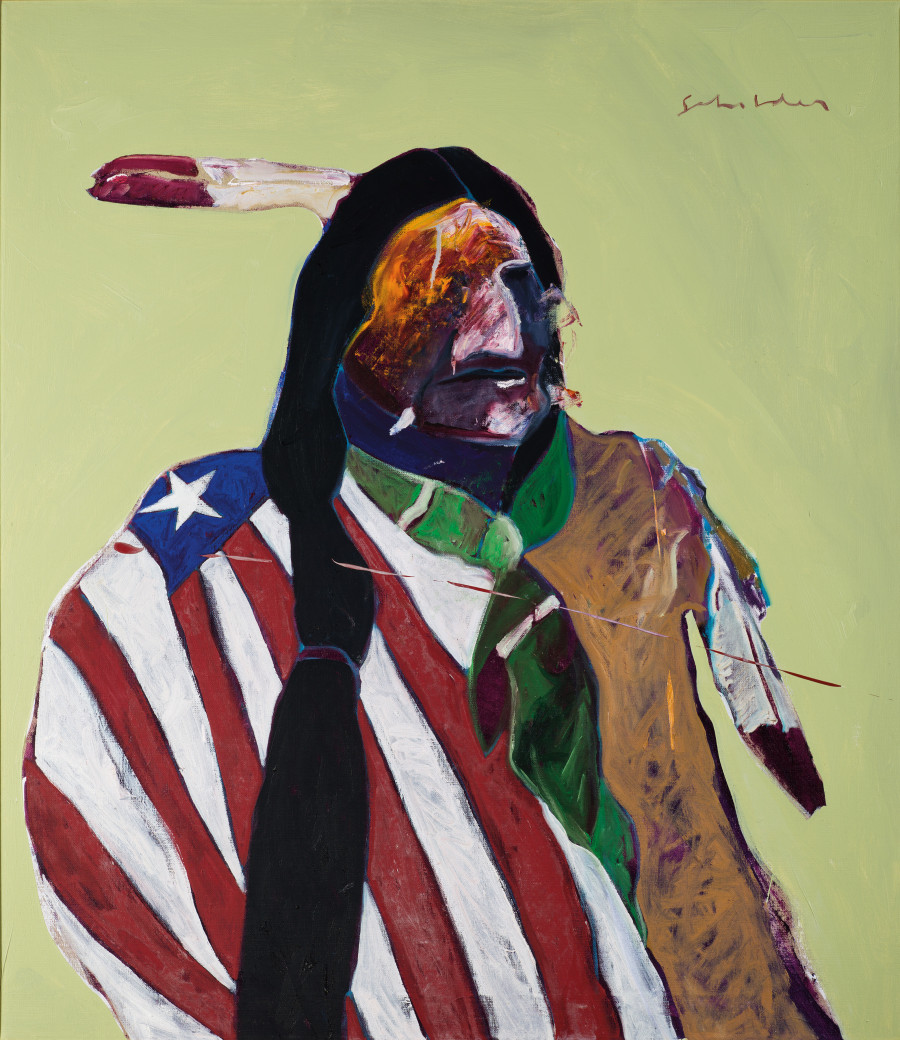 Back in the late '60s and '70s, Scholder's pop art drew attention good and bad, and it continues to do so today. "It's still haunting; it's still devastating seeing these white teeth, a distorted face to suggest a skull," Comanche author Paul Chaat Smith explained to NPR in 2008. "You can't see the figure's eyes, they're behind sunglasses -- incredibly arresting and powerful work even today, but back then it was extraordinary."

Part of the sensation surrounding Scholder's works boiled down to the fact that the artist wrestled with his own Native American heritage. Despite the fact that his paternal grandmother was a member of the Luiseño tribe of Mission Indians, Scholder publicly claimed that he wasn't American Indian and that he would never paint American Indians. Some critics not-so-silently saw this as fraud.

Yet Scholder became most known for his "Indian" series, a collection of portraits that rendered his subjects as conflicted rather than stoic, familiar rather than mythic. Not long after he began teaching at the Institute of American Indian Arts, his works openly explored the contemporary identity of American Indians, forcing stereotypes off the canvas and forging, rather reluctantly, what would arguably become the basis for contemporary Native American art. 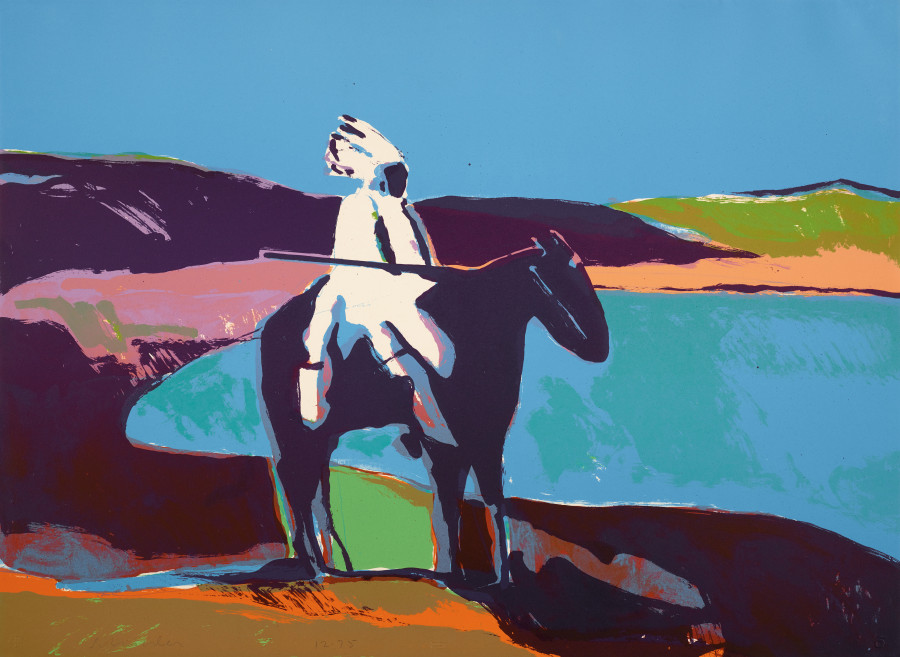 Collector and Denver Art Museum patron Kent Logan elaborates: "Despite his repeated denials that he was not an Indian and would never paint Indians, the emotional intensity of these 1970s portraits dismisses any notion that Fritz Scholder was not personally invested in a protracted, tragic, and still unresolved Native American experience."

Scholder's works are set to go on view this fall at the Denver Art Museum in an exhibition titled "Super Indian," drawn from the painting "Super Indian No. 2." Covering the portraits he made between 1967 and 1980, the pieces reflect a time period colored by the rise of the American Indian Movement (AIM) and the aftermath of the broader civil rights movement. While pop art was sweeping the states -- and evidence of this can be seen in Scholder's figuration, reminiscent of Philip Guston and Wayne Thiebaud -- sociopolitical art was taking hold too.

"Scholder was not a protest painter," John P. Lukavic writes in the exhibition's catalog. "He did not 'dig Red Power.'" But his desire to break up stereotypes and urge Americans to confront an un-romanticized portrait of American Indians was nothing if deliberate. 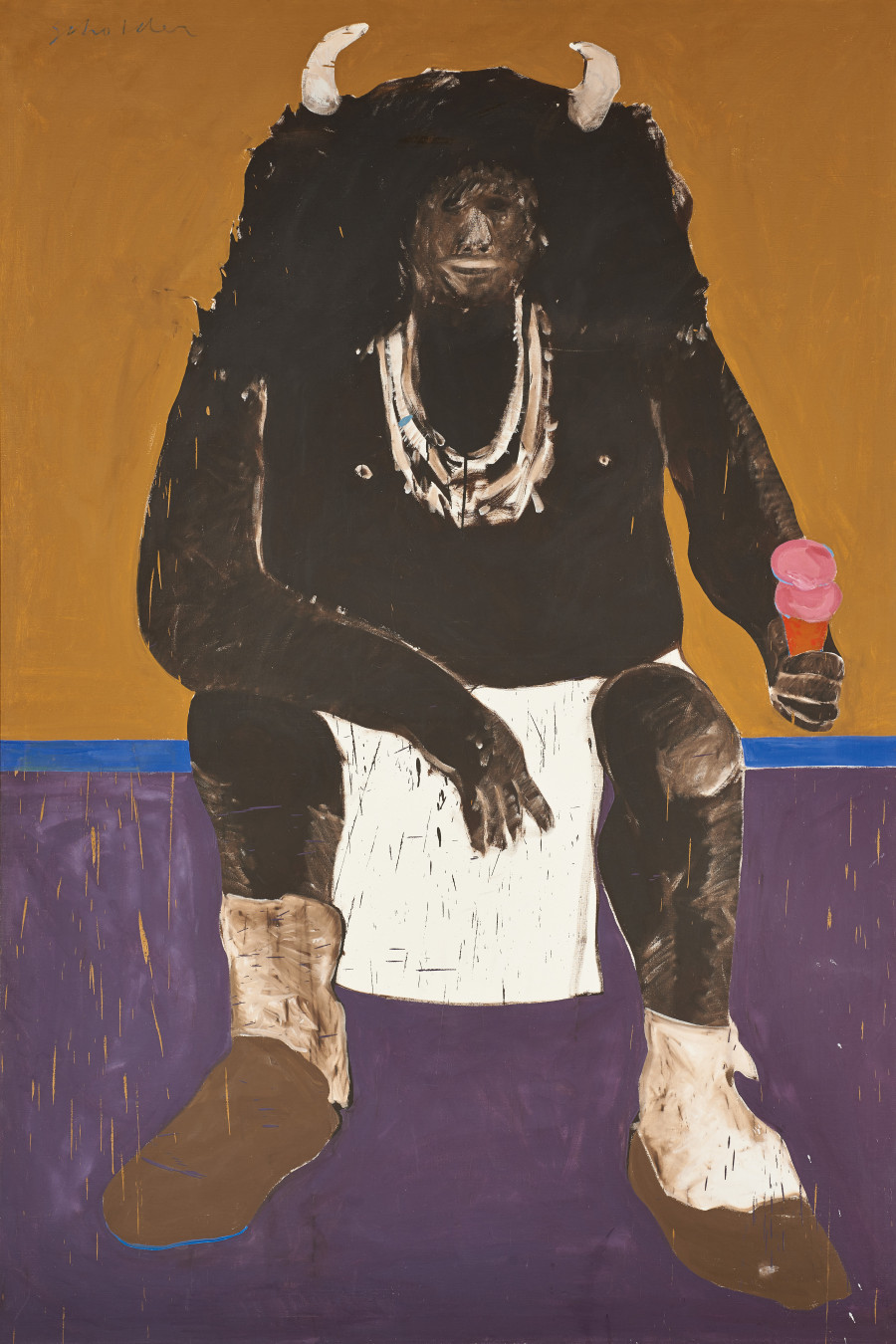 Fritz Scholder, "Super Indian No. 2," 1971. Oil paint on canvas; overall: 90 × 60 in. Promised gift from Vicki and Kent Logan to the Collection of the Denver Art Museum © Estate of Fritz Scholder.

Besides "Indian with Beer Can," Scholder painted Sioux chiefs and Hopi dancers, but for every traditional scene there's a portrait loaded with hidden meaning. Titles like "Mad Indian," "Monster Indian" and "Insane Indian" hint as much. His bright color palettes morph into abstracted bodies equipped with clenched jaws and clenched fists, revealing subject matter both harrowing ("Indian Dying in Nebraska") and tongue-in-cheek ("Hollywood Indian"). Operating under a simple M.O. -- "Real not Red" -- he built a complex representation of the 20th-century American Indian before he died in 2005, one never free of controversy.

"Here is what Scholder’s work forces me, and other Indian people of a certain generation to remember," Paul Chaat Smith writes on his blog. "That we used to have short hair and wear IHS glasses. That we passed for white. That our grandparents were raised by the army. That we drink. That we weren’t always about tradition, that most people we knew didn’t care about it either, until not so long ago when suddenly everyone did and then pretended that we always had cared about it. That we often we hated ourselves, and sometimes we still do. That life is ugly and beautiful, that monsters are real. And that death is never far away."

In response, Scholder would probably have fallen back on his typically cryptic but nonetheless powerful prerogative: “I felt it to be a compliment when I was told that I had destroyed the traditional style of Indian art, for I was doing what I thought had to be done.” 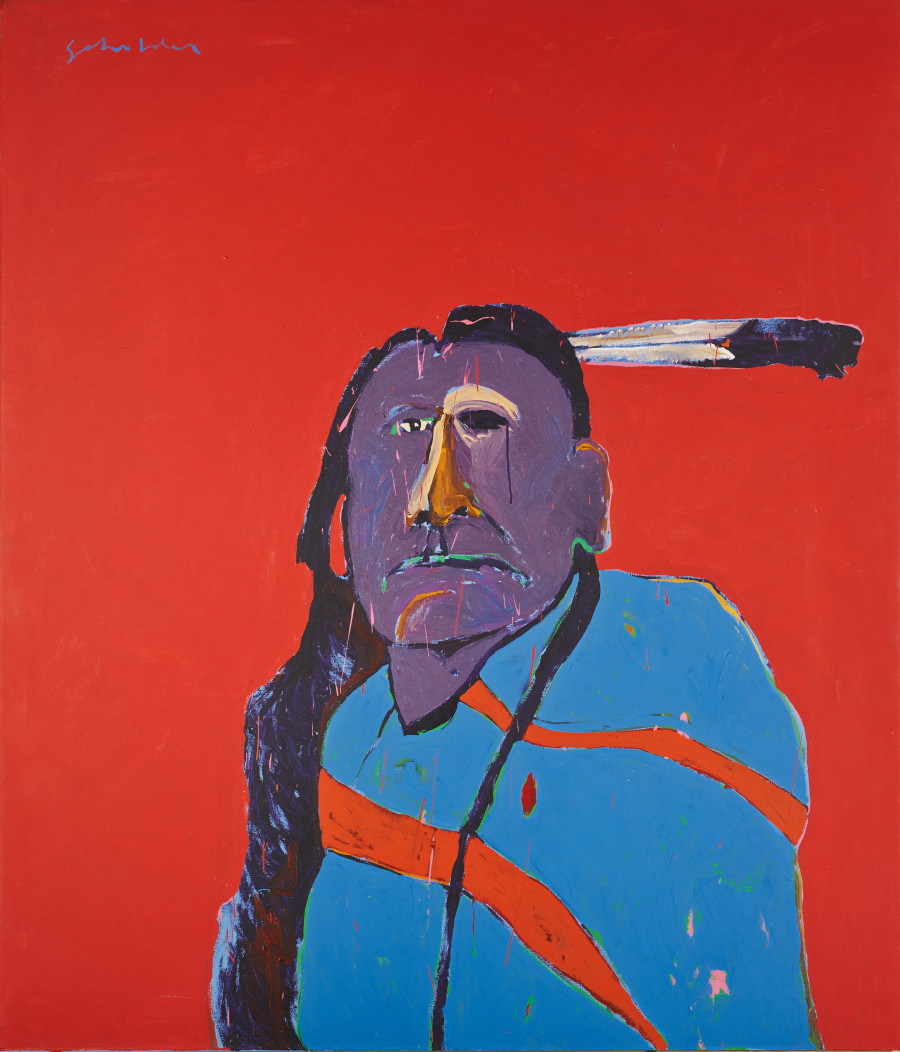 Fritz Scholder, "American Portrait with One Eye," 1975. Acrylic paint on canvas; overall: 80 × 68 in. Collection of Vicki and Kent Logan. © Estate of Fritz Scholder. 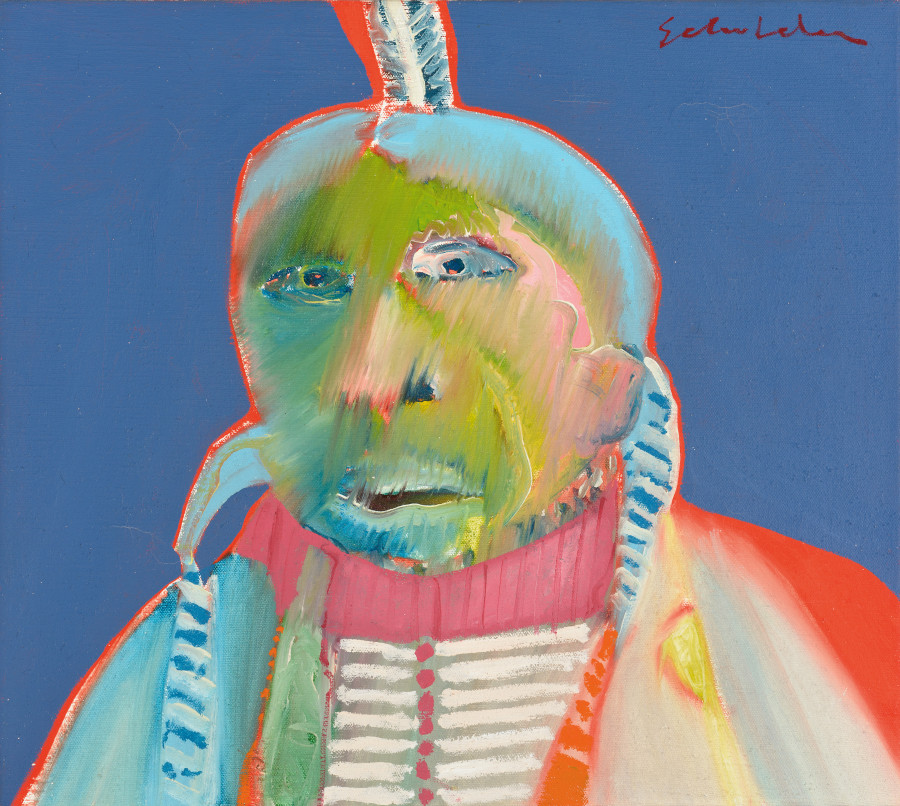 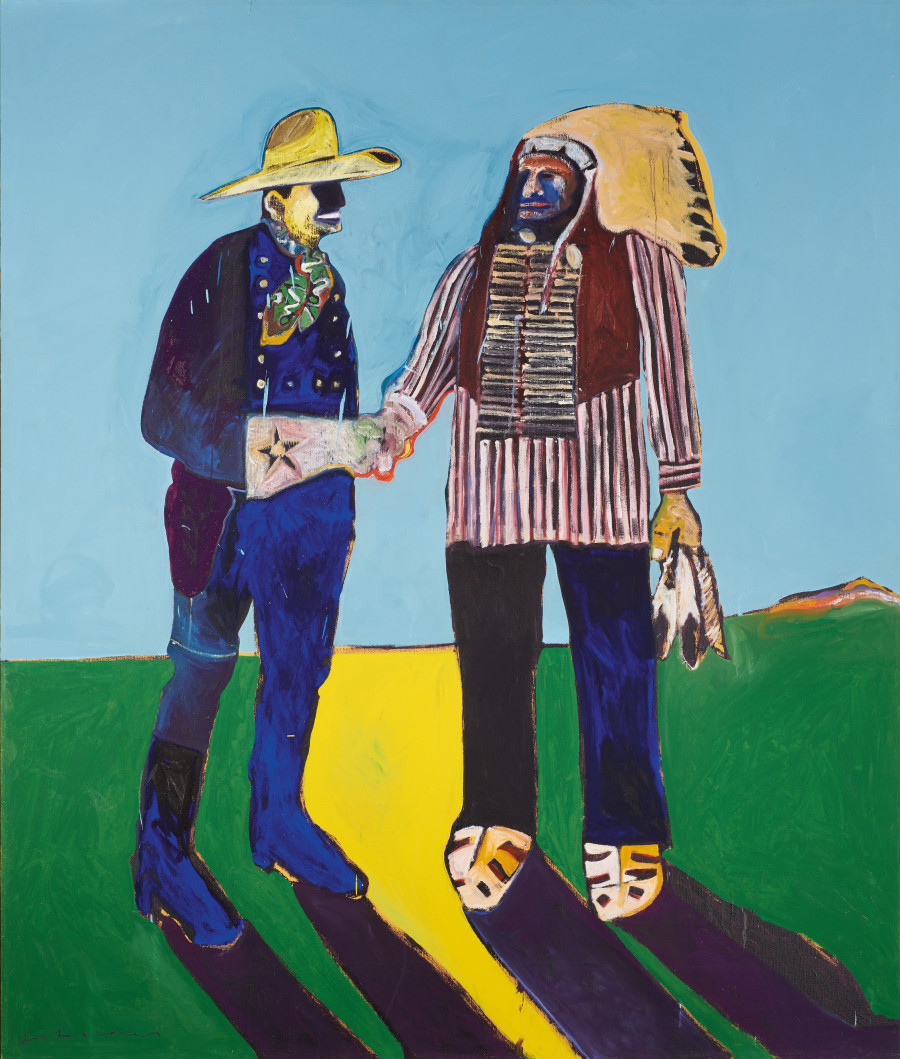 Fritz Scholder, "Matinee Cowboy and Indian," 1978. Oil paint on canvas; overall: 80 × 68 in. Promised gift from Vicki and Kent Logan to the Collection of the Denver Art Museum. © Estate of Fritz Scholder. 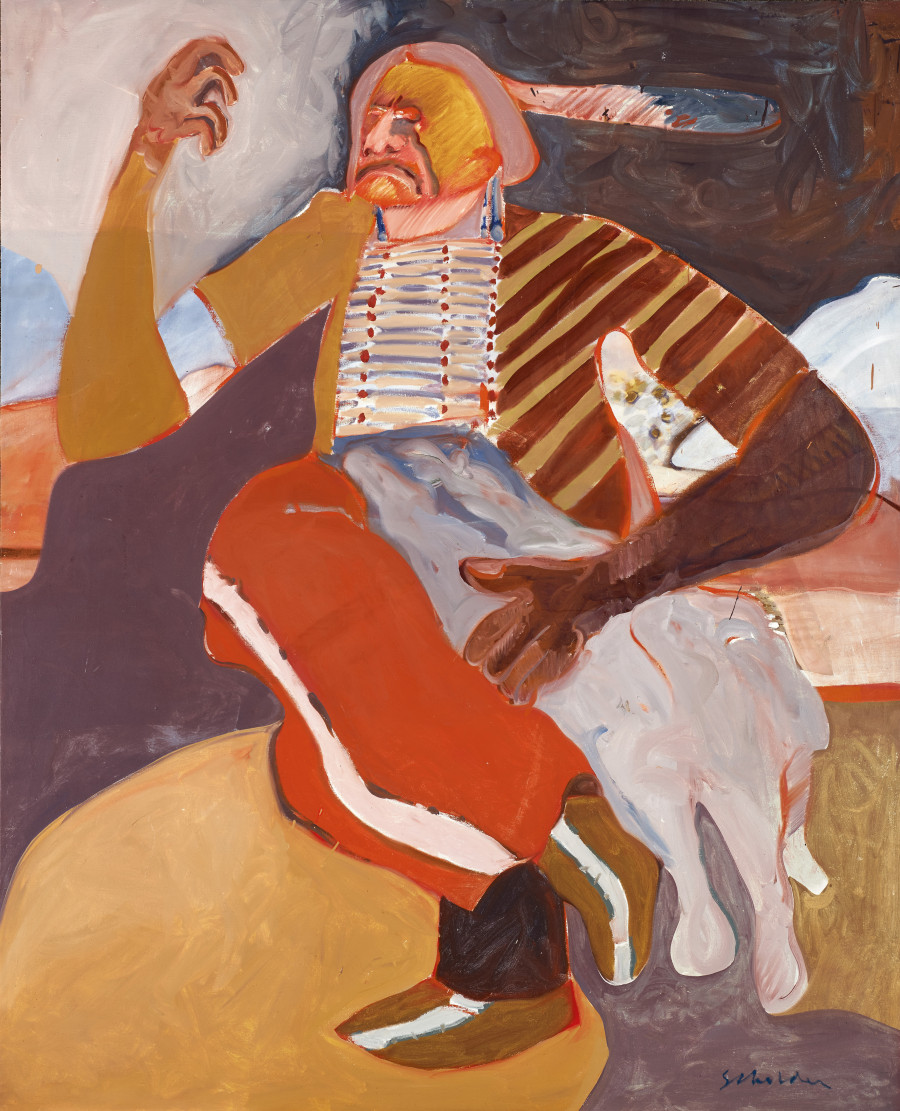 Fritz Scholder, "Mad Indian," 1968. Oil paint on canvas; overall: 71 × 60 in. Promised gift from Vicki and Kent Logan to the Collection of the Denver Art Museum. © Estate of Fritz Scholder. 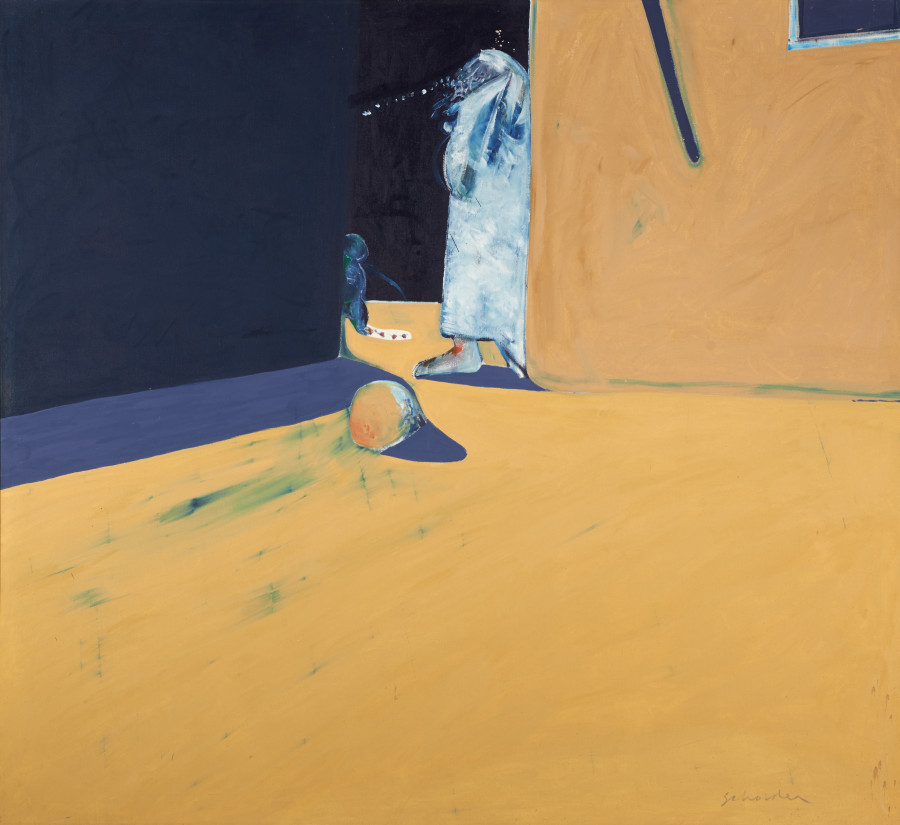 Fritz Scholder. "Indian in Taos Pueblo," 1970. Oil paint on canvas; overall: 65 × 70 in. Promised gift from Vicki and Kent Logan to the Collection of the Denver Art Museum © Estate of Fritz Scholder. 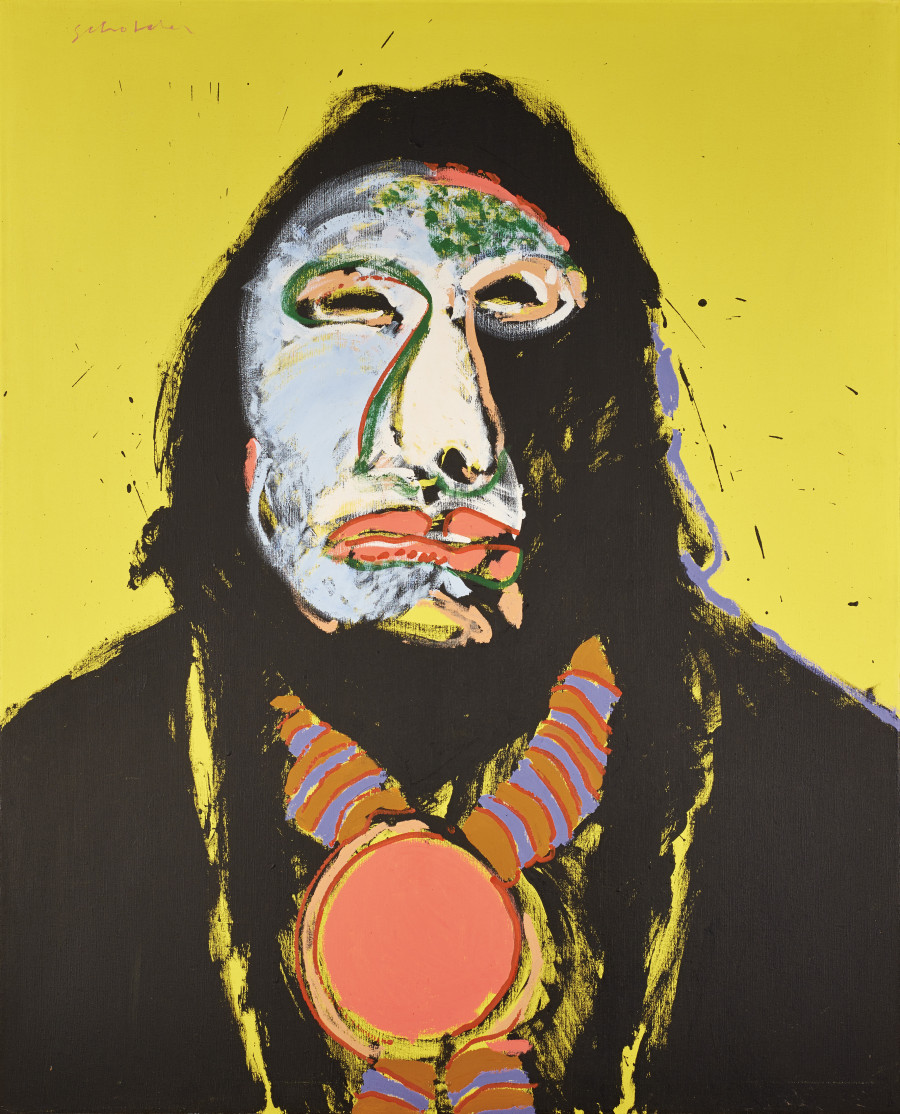 Fritz Scholder, "Insane Indian No. 26," 1972. Acrylic paint on canvas; overall: 68 × 54 in. Promised gift from Vicki and Kent Logan to the Collection of the Denver Art Museum © Estate of Fritz Scholder. 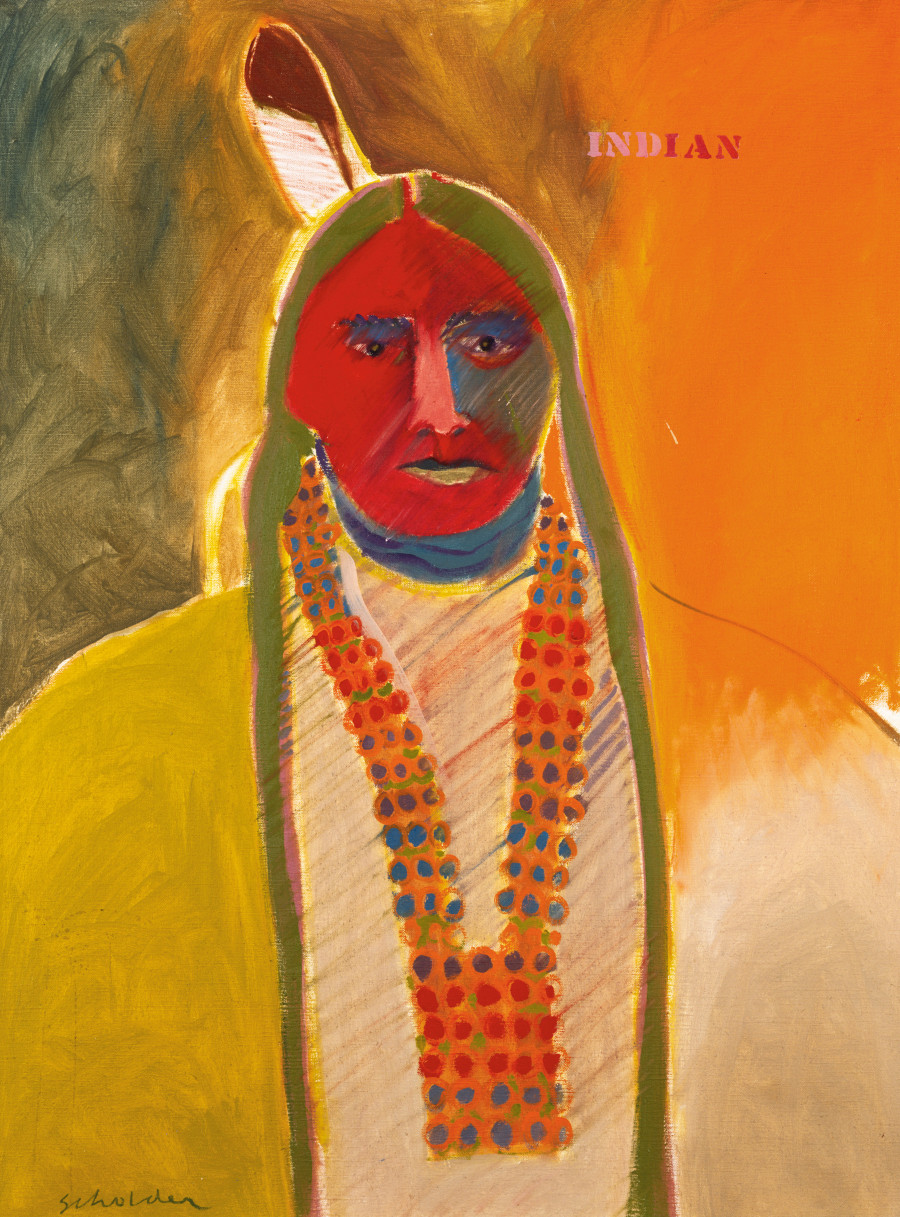 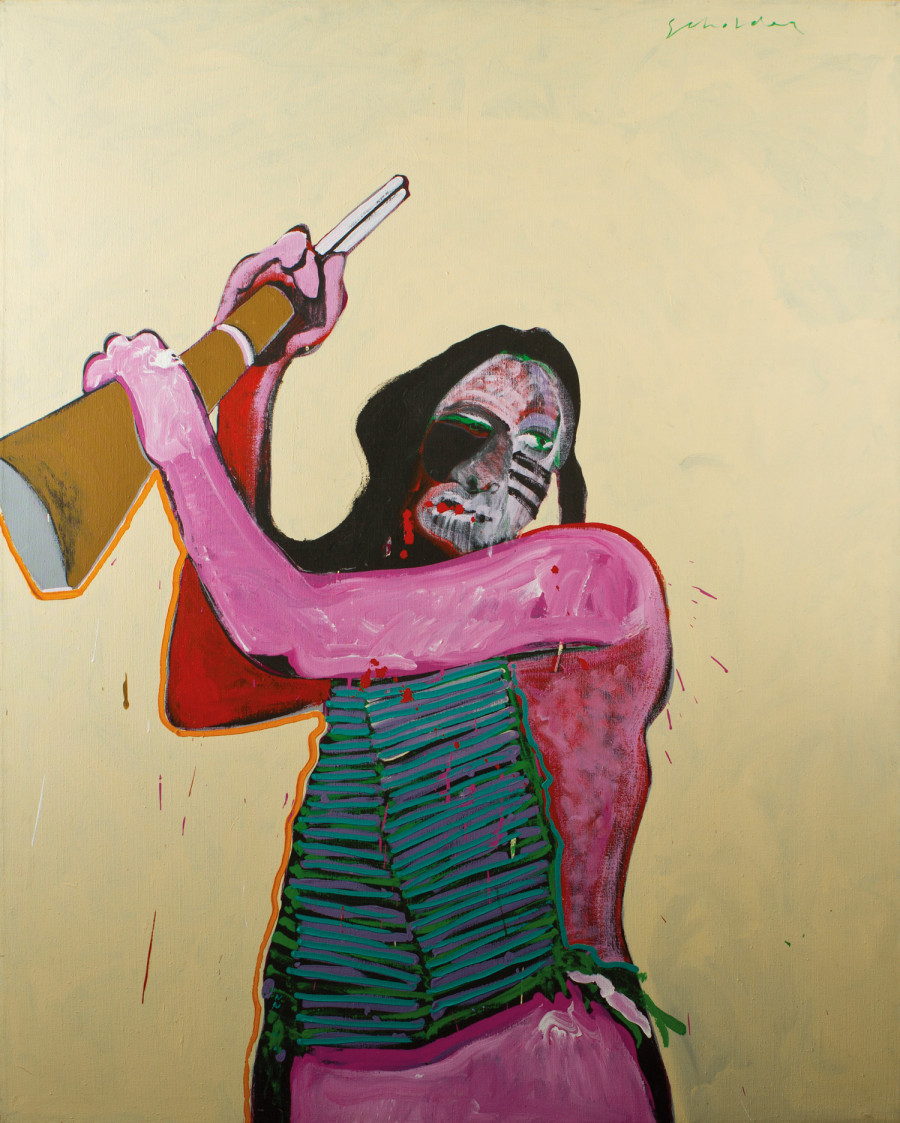 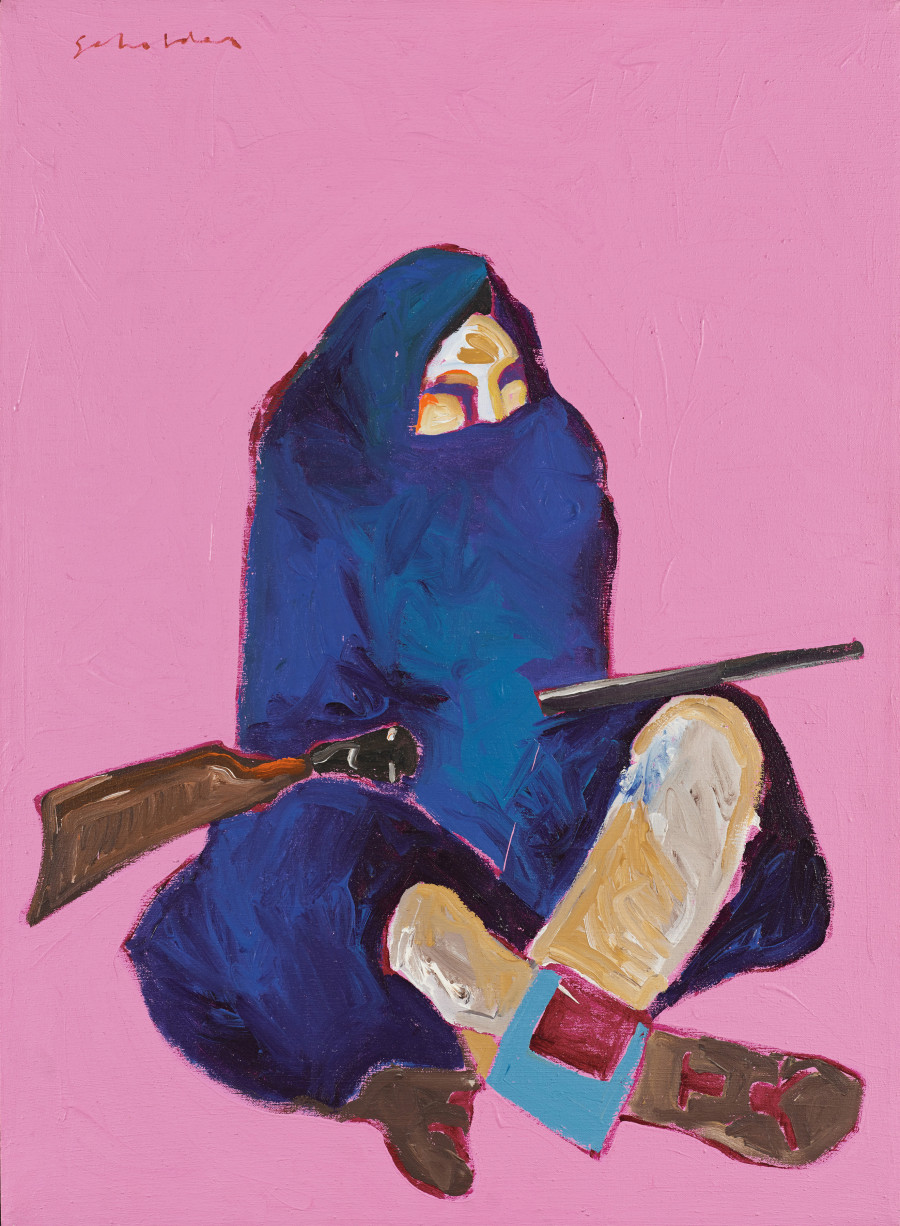 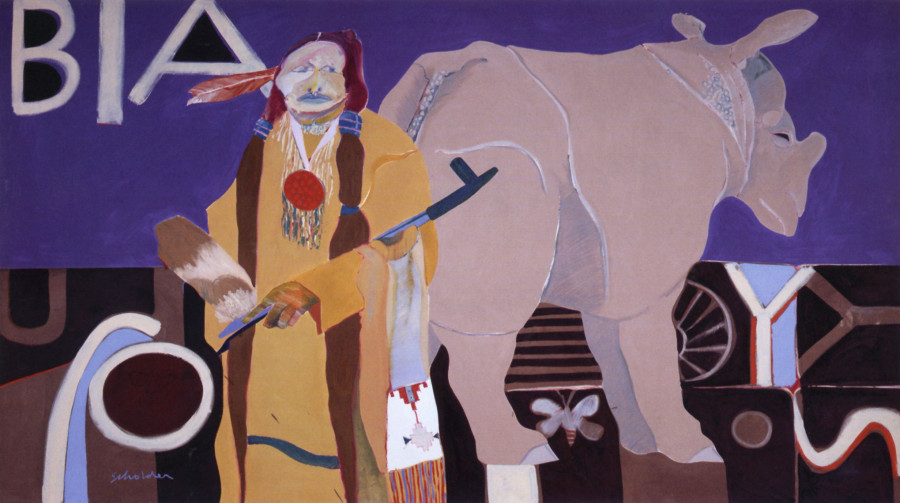 "Super Indian" is part of the Denver Museum of Art's "overall initiative to expand the visibility of contemporary art by American Indian artists." The exhibition, featuring 40 rarely seen paintings and lithographs, will be on view from Oct. 4 to Jan. 17, 2016.