WASHINGTON -- Contributions to super PACs fell in April from the month before as the Republican presidential primary race ended. The unlimited money political committees that report finances monthly -- many super PACs only file every three months -- raised $12.4 million in April, $10 million less than either March or February, and down nearly $20 million from January.

The drop in super PAC fundraising shows how the new fundraising committees have settled on pseudo-independent roles supporting one candidate for election. Super PACs came into existence after after two court decisions, including the U.S. Supreme Court with its Citizens United ruling, freed corporations, unions, and individuals from many campaign finance restrictions. Contributions to super PACs that backed Newt Gingrich and Rick Santorum, who suspended their presidential campaigns last month, made up more than 70 percent of the difference between super PAC contributions in April and those in each of the first three months of 2012. 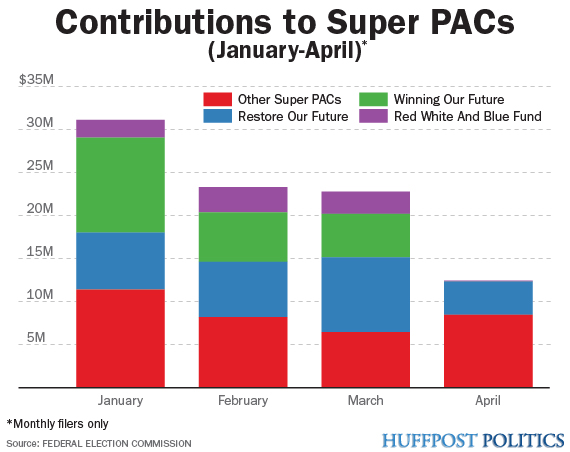 Donors giving more than $500,000 remained the biggest providers of super PAC funds. There are 84 donors who have given more than $500,000 to super PACs, accounting for 66 percent of all super PAC donations for the 2012 election cycle. In April, donations of $500,000 or more came from five donors and totalled $5.79 million, slightly less than 50 percent of all contributions for the month.

New contributions from six donors put them in the $500,000-plus club in April. The top donor for the month was a first-time contributor, the National Association of Realtors. The trade group, which does not disclose its donors, contributed $1.81 million to its own super PAC. The original source for the contribution wasn't disclosed.

Conservative donors Jerry and Marilyn Hayden joined the $500,000-plus club after giving $300,000 to Club for Growth Action, the super PAC run by the conservative non-profit of the same name. The couple previously gave $410,000 to the Club for Growth super PAC and another conservative, tea party-backing super PAC, FreedomWorks for America. The Haydens were thanked by billionaire Charles Koch for their donations during the annual Koch meeting for wealthy conservatives.

The final new $500,000-plus donor was Bain Capital managing director Stephen Zide. He doubled his previous giving by contributing $250,000 to Restore Our Future in April.

Texas industrialist Harold Simmons, the second-biggest super PAC donor, dropped another $1 million into the Karl Rove-linked super PAC American Crossroads. That contribution brought his total to $17.7 million when combined with donations made by his wife and through his company, Contran Corp.

Bob Perry, the third-biggest super PAC donor, put $100,000 into the Texas Conservatives Fund, a super PAC backing Texas Lt. Gov. David Dewhurst's Senate bid. Perry's April contributions would have been higher, but the pro-Romney Restore Our Future reimbursed a $750,000 contribution he made during the month.

The American Federation of Teachers pushed its total super PAC giving up to $1.6 million with a $300,000 contribution to Majority PAC, which is backing Democratic Senate incumbents and candidates.

Sen. Jim DeMint (R-S.C.) continued to be the only member of Congress to make significant investments in super PACs. DeMint gave $200,000 from his campaign coffers to Club for Growth Action to bring his total giving to $700,000. The contribution came as the Club super PAC spent $1.45 million to defeat Sen Dick Lugar (R-Ind.) in a primary campaign. The very conservative DeMint uses his leadership PAC to support his favored conservatives in Senate primaries, but never against incumbents. By contributing to the Club for Growth super PAC he has found a way to keep an arm's distance while directly challenging his colleagues.

1 / 208
Sheldon Adelson And Family (R)
Sheldon Adelson, the Las Vegas casino magnate, and his family have combined to give $53.69 million to super PACs in the 2012 election cycle. At first, Adelson pumped money into Winning Our Future, the super PAC supporting Newt Gingrich, but now he is funding groups backing Mitt Romney and congressional Republicans. Adelson is ranked on the <em>Forbes</em> list of the richest Americans at number eight, with $21.5 billion in net worth. Sheldon Adelson and his wife, Miriam, gave $15 million to Winning Our Future. His daughters Sivan Ochshorn and Shelley Maye Adelson each chipped in $500,000. Another daughter and her husband each gave $250,000. Adelson and his wife have also given $20 million to Restore Our Future (supporting Romney), $5 million to Congressional Leadership Fund, $5 million to YG Action Fund, $2 million to Freedom PAC (supporting Connie Mack), $1.5 million to Independence Virginia PAC (supporting George Allen), $1 million to Ending Spending Action Fund, $1 million to Treasure Coast Jobs Coalition, $1 million to Patriot Prosperity PAC (supporting Shmuley Boteach for Congress) and $250,000 to Conservative Renewal PAC, $250,000 to Texas Conservatives Fund (both supporting David Dewhurst) and $190,000 to Hispanic Leadership Fund. Adelson remained in the number one spot among super PAC donors after counting contributions for August. He has allegedly <a href="https://www.huffpost.com/entry/sheldon-adelson-to-lavish_n_1600149">given in excess of $70 million</a> when contributions to non-profit groups like Americans for Prosperity and the Republican Jewish Coalition are included. His involvement in politics revolves around his support for the state of Israel, <a href="https://www.huffpost.com/entry/sheldon-adelson-newt-gingrich-israel_n_1195867" target="_hplink">in particular the policies of Prime Minister Benjamin Netanyahu</a>. His business, along with that of other super PAC donors, <a href="https://www.huffpost.com/entry/sheldon-adelson-bribery-super-pac-donors-fcpa_n_1602694" target="_hplink">is also under investigation</a> for violations of the Foreign Corrupt Practices Act.
Getty