These are just some of the memorable lines from the many attack ads run during the all-but-officially decided Republican presidential primary. None of those attacks, however, came from any of the candidates mentioned in them. Instead, they were all made by super PACs, independent political committees allowed to raise unlimited sums from corporations, unions and individuals, often run by former aides of the various candidates.

Leading the charge by a significant measure has been Restore Our Future, the pro-Romney super PAC.

Having made their debut in presidential primaries after two court rulings, most prominently the Supreme Court's Citizens United ruling, super PACs drove spending, particularly on attack ads, in the primary election like never before. Spending by independent groups like super PACs exploded by more than 300 percent from the 2008 primary season.

In 2008, independent group spending in both the Republican and Democratic primaries totaled $26.11 million. That number reached $83.87 million in the 2012 primary, and that's with only the Republican nomination being contested. 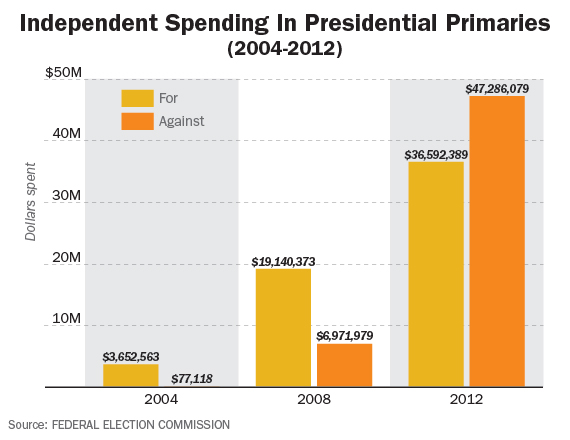 That massive growth in negative spending and attack ads was tied directly to one super PAC: The pro-Mitt Romney Restore Our Future spent $39.34 million attacking opponents like Gingrich and Santorum. The group accounted for 83 percent of all negative spending by independent groups in the Republican primary and on negative attacks it outspent the super PACs supporting Gingrich and Santorum by an 8-to-1 margin.

According to a study released on Friday by the Annenberg Public Policy Center, most of Restore Our Future's ad spending went towards attack ads that featured deceptive and misleading claims.

The Annenberg study examined advertising spending by four independent groups running ads in the Republican primary and found that $23.3 million of the $41.1 million spent between the Iowa caucuses through the Wisconsin primary went toward deceptive attacks.

"Over half of the ads that were aired by third-party groups had at least one element in them that we found deceptive," Jamieson told The Huffington Post.

Restore Our Future's spending, at $20.8 million, made up nearly all of that total. The other groups -- the pro-Gingrich Winning Our Future, the pro-Santorum Red White And Blue Fund and the public sector union American Federation of State County and Federal Employees -- only accounted for $2.5 million.

The pro-Gingrich and pro-Santorum barely spent anything on deceptive ads, according to the Annenberg study, and also spent little on attack ads compared to Romney's super PAC.