Super PACs, the political groups flexing their muscles in a presidential race for the first time, are disproportionately funded by a handful of donors.

In a similar vein, the Associated Press found that of the $60 million collected by candidate-aligned super PACs, $33 million came from just 24 individuals. Every presidential candidate, including President Barack Obama, has a donor who has made a contribution of $1 million or more to his aligned super PAC.

The findings are a stark showing of how Citizens United and subsequent lower court rulings have altered the campaign finance landscape. Super PACs are allowed to accept unlimited donations from individuals and corporations, of which they must disclose, but they are not allowed to legally coordinate with the candidates they support.

Naturally, the donors themselves are attracting attention as they write large checks to the groups.

Adelson and his wife have donated $11 million to Winning Our Future, the Newt Gingrich-aligned super PAC. They are reportedly planning to donate another $10 million. The Huffington Post calculated that the Vegas billionaire made $3.3 million per hour in 2011.

Bob Perry, a major donor to the "Swift Boat" group that helped sink the presidential fortunes of John Kerry in 2004, has donated $2.5 million to Crossroads since 2011, in addition to contributions to pro-Romney and pro-Perry (no relation) super PACs.

Thiel, a billionaire investor in Facebook, has donated $2.6 million to a pro-Ron Paul super PAC, Endorse Liberty. Thiel, in comparison to conservative super PAC donors, has libertarian leanings -- he has donated to gay rights groups, an institute seeking to create libertarian islands in the middle of the ocean and a proposition to legalize marijuana in California.

The pro-Romney super PAC, Restore Our Future, has been aided by over two dozen repeat donors, including from the Marriott family. Romney previously served on the board of directors for Marriott hotels. (See the slideshow below for more details on the group's donors.)

Obama has his own supportive super PAC, too -- Priorities USA Action. However, it raised just $59,000 in January, and Obama reversed course and gave the group his blessing in early February. DreamWorks Animation CEO Jeffrey Katzenberg gave $2 million to the group last year.

With the GOP primary race in doubt and the general election not even started, super PAC spending is likely bound to increase. Adelson, in a rare interview with Forbes published Tuesday, hinted at what his plans might be. 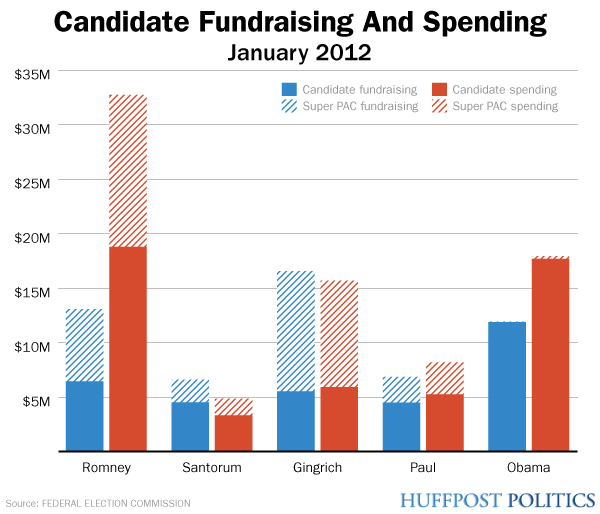