It was about time someone combined the phrases "super PAC" and "Pac-Man," wasn't it?

That exactly what the non-profit organization unPAC.org did with a new online game called "Super Pac-Man." In this new take on the famous 1980s arcade game, the little heads of Barack Obama or Mitt Romney take the place of the traditional yellow cramper, while the white pellets he feeds on are replaced by dollar signs. 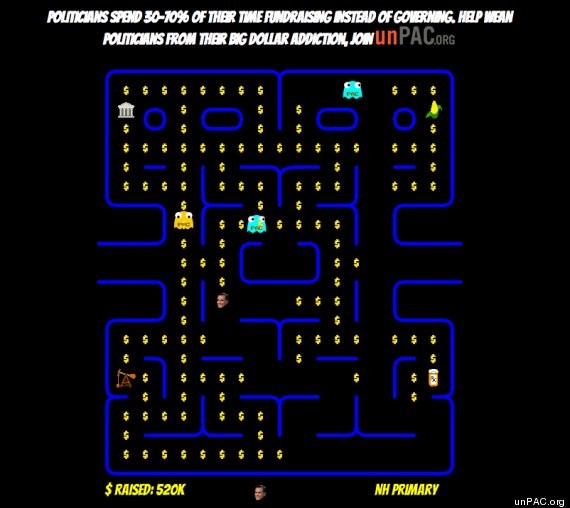 The game, which you can play here, is packed (eh?) with clever little criticisms of the process of running for president. Levels are named after events in the campaign ("NH Primary," "Super Tuesday"), and the fruit the Pac-Man eats for bonuses in the original game are replaced with graphics representing interests like "Big Oil" and "Big Pharma."

As the name suggest, unPAC.org, founded in July, advocates against the influence of money in politics as exerted though the special committees sanctioned by the Supreme Court in Citizens United to take in and spend unlimited amounts of money on advertising.

"It's such perfect metaphor for outside political groups spending money that we just had to do it," co-founder Matt Palevsky told the Huffington Post. Palevsky, who once worked as an editor at HuffPost, said inspiration for the game came while editing a video about super PACs that made a "Pac-Man" pun.

The 2012 presidential race, the first national election since the landmark court decision, has been characterized by super PACs and the ads with which they've flooded YouTube and TV airwaves. We'll note that technically, neither Obama nor Romney directly receive money from a super PAC, which is against the law. Instead, these unaffiliated groups create ads that aren't officially coordinated with any campaign.

It's also been a campaign full of online political humor, whether it be the mountains of GIFs or Tumblr blogs created by potential voters poking fun at the candidates. In this election cycle, "Super Pac-Man" just seems inevitable.

Check out the game here.